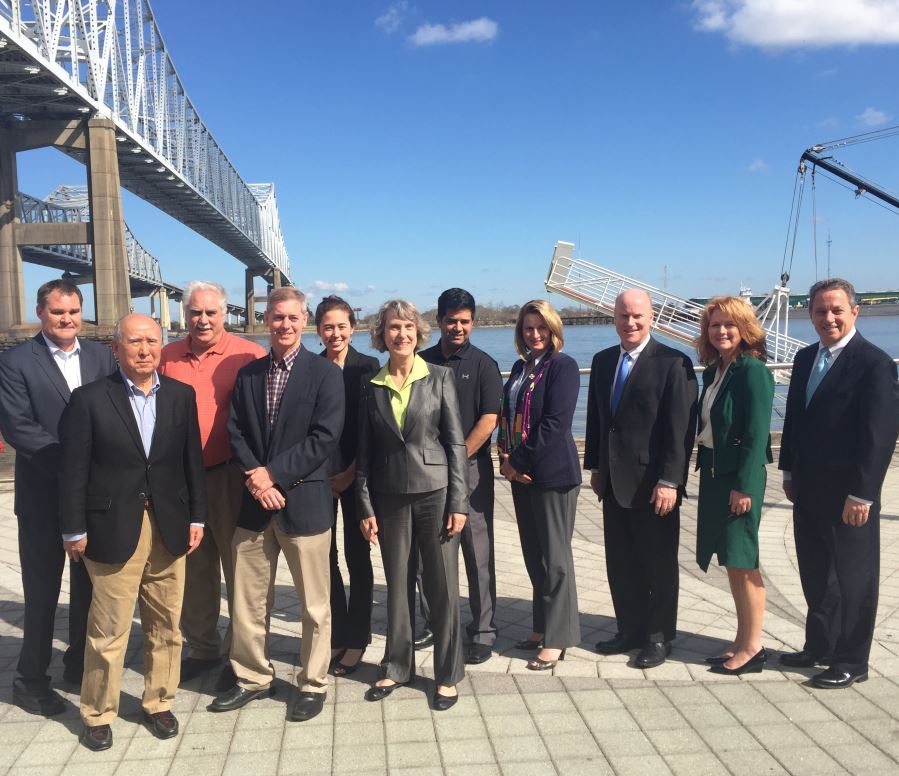 The Board of Commissioners of the Port of New Orleans and the St. Louis Regional Freightway on Thursday entered into a Memorandum of Understanding to exchange market and operational information with the goal of growing trade and building upon existing and new business relationships between the two regions and critical ports.

The agreement also calls for joint marketing efforts to meet those objectives.

“The Port of New Orleans historically has strong ties to business and industry via the St. Louis corridor,” said Brandy Christian, president and CEO of the Port of New Orleans. “Located in the Lower Mississippi River system and served by all six Class 1 railroads and the interstate highway system, Port NOLA is the most intermodal port in the nation. Today’s agreement solidifies our efforts to work with our inland neighbors to develop new opportunities and optimize our connectivity.”

“This agreement, and the collaborative partnership it is founded on, will go a long way toward helping coordinate the Port of New Orleans’ supply chain with our supply chain and enhancing the St. Louis region’s ability to move freight up and down the Mississippi River for the entire nation,” said Lamie. “We now have a framework to work more closely together to generate new business activity that will help accelerate the present level of economic growth by increasing revenues to the Port of New Orleans and optimizing the St. Louis region’s freight network.”

The Port of New Orleans is served by the Mississippi River and its tributaries, which combined offer 14,500 miles of navigable waterways. With three inland ports, including the nation’s third and eighth largest inland ports, the St. Louis region holds an enviable position within that inland waterway system, strategically located in the heart of the nation at the northernmost ice-free and lock-free point on the Mississippi River.

At the core of the MOU is the shared recognition that continued growth at the Port of New Orleans, and future growth around freight movement through the various ports in the bi-state St. Louis region, are intrinsically connected, with 500 million tons of cargo already being handled by the Lower Mississippi River.

Nations commented on the importance of the MOU for the St. Louis Regional Freightway, which is the newest BSD enterprise. “We believe the agreement entered into this week will stand as one of the most significant accomplishments of The Freightway due to the far-reaching positive impact it will have for the region and the nation,” Nations said. “With a projected 40 percent growth in freight volume over the next 30 years, the actions we take today are laying the groundwork for our region to be a premier gateway for the freight community in the 21st century.”

Among the opportunities the St. Louis Regional Freightway hopes to swiftly capitalize on are new container-on-barge services. The strengthened relationship fostered by the MOU should help to ensure that as growth continues at the Port of New Orleans, it triggers growth on the inland waterways, and specifically in the St. Louis region where it has been demonstrated that the ports can handle containerized freight shipments.

The bi-state area freight group visited the Seacor AMH Terminal located within the Port of Greater Baton Rouge, Louisiana, on Feb. 22 to tour container-on-barge loading and to learn more about Seacor AMH operations which includes terminal services in the St. Louis area. The delegation also met with Mediterranean Shipping Company representatives in Metairie, La., to gain insight into its freight movement through the Port of New Orleans. Prior to signing the MOU, the delegation also met with the U.S. Coast Guard to better understand its operations and coordinated efforts with other governmental agencies in New Orleans and Baton Rouge. Following the MOU signing, the delegation toured the Port of New Orleans aboard its Gen. Kelley fireboat.

—      From the Illinois Business Journal via Bi-State Development Agency