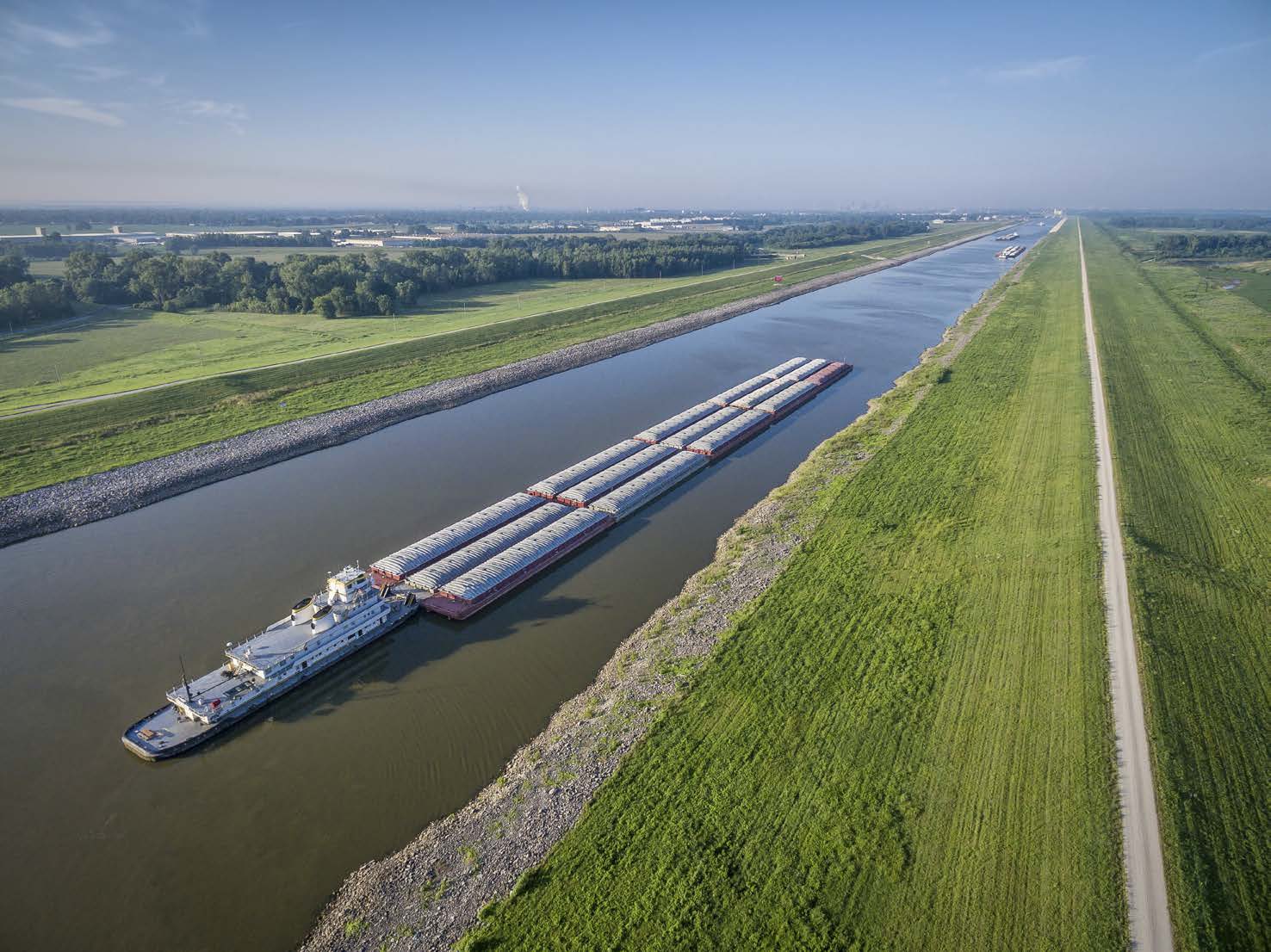 While many of us have been enjoying $2 per gallon gas prices, it’s been tough on the barge business, which executives say has been hit by a “double whammy” of too much capacity and not enough demand.
High oil prices spawned the development of hydraulic fracking for oil in America and turned tiny prairie hamlets into boom towns overnight. It fueled a demand for pipe and kept the blast furnaces burning bright at steel mills like U.S. Steel’s Granite City division. It was also a boon to the barge industry, which was called upon to haul both the oil produced at the fracking sites and the sand necessary to help drive it out of the earth.
“When the oil boom was going on there were a couple of things that happened,” said Mark Mestemacher, managing member of Ceres Consulting, LLC in East St. Louis. “We were moving a lot of sand by barge to the fracking fields and crude oil was being moved by tanker barge because pipelines didn’t exist to get the product to the refineries. There were a lot of barges built during that timeframe to keep up with demand.”
A lot of coal was being shipped by barge as well, said Mestemacher, because a large coal seam fire in Australia in 2014 reduced its exports and drove up world-wide demand for Illinois coal.
“We had an unbelievable year (in 2014) where there was demand for everything,” Mestemacher said.  “Rates went up; everyone was making money and a lot of money was spent on boats and barges to fill the demand.”
Oil prices hit a high of $106.57 per barrel in August 2013 but then began to slip. They dipped below $100 a year later and haven’t come close since. The Brent spot price fell below $30 a year ago and, as of this report, was hovering around $52 per barrel.  Industry analysts say that $60 is the level at which fracking becomes profitable in the U.S. Plummeting oil prices turned the fracking boom towns into ghost towns as the drills shut down and workers were laid off.
The bust of the fracking industry means less demand for sand, less demand for pipe and less demand for the barges that moved the sand and the steel and the oil. Mestemacher’s company moves a lot of grain, and grain exports have remained strong, he said. But, because it is one of the few strong commodities, barge owners have been converting open barges used for shipping things like coal and sand, into covered barges suitable for grain shipments and that’s created a glut in the market.
“Because there were so many open tops sitting idle, barge owners were putting covers on them and the number of covered hopper barges jumped from 11,500 to 13,200,” he said. “In 2016 there were a ton of open tops that just sat, pretty much doing nothing. Near the end of 2016 and the beginning of 2017 there was a little bit of increase in demand for coal exports. So, some of those open tops are being put back to work.”
Mestemacher said that his company has also seen an increased demand to haul gypsum. He explained that limestone is used in the scrubbers used by power plants to reduce emissions. A byproduct is synthetic gypsum, which is then hauled to wallboard plants and goes into making drywall.
“That’s actually been OK the last six months of 2016 and even here for January and February,” Mestemacher said. “That’s an indication of the overall amount of construction going on in the U.S.”
Tom Horgan, manager of the mid-content region of the American Waterways Operators, an advocate for the towboat, tugboat and barge industry, said the barge business is cyclical and experiences ups and downs. But, he has confidence in its long-term strength.
Railways and highways, particularly in the Midwest, are running at capacity. One, 15-barge tow haul can move as much product as 1,050 trucks, he said.
And barges can haul one ton of cargo 616 miles per gallon of fuel compared to rail, which only gets about 478 mpg and trucks that get just 150. He also said that barge transportation has by far the best safety record.
“This is not the time to hit the panic button,” Horgan said. “We’ve been through this many times before and the issue of the excess barge capacity will rectify itself. Some of these barges are old and will have to be retired and, when demand picks up, more barges will be used.”
Horgan said there are still “many positive things going for us.  We still are, without question, the most cost-effective, safest, environmentally friendliest and efficient mode of transportation available.”