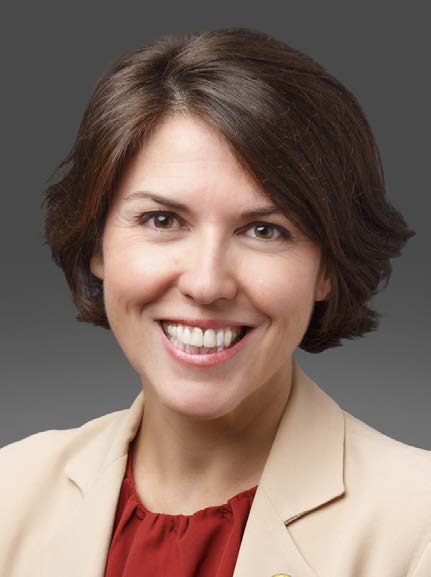 Throughout history, national economies have risen — and fallen — around international trade. That makes the unpredictable predilections of Donald Trump a subject of intense interest in Illinois, one of the largest participants in the exporting world.
Will he scuttle longstanding trade deals in the quest for something better, as he’s threatened? Could those actions be the precursor to a global trade war?
Among those watching the president-elect for some sign of what’s to come is Laura Ortega-Lamela, executive director of the International Business Council of the Illinois Chamber of Commerce. She’s hopeful that the new administration will resolve trade questions without dealing a blow to progress the agency has seen since its formation in 2013.
“A lot of things will have to be figured out,” she said. “The world in general seems to be on a trend of more protectionist measures, and I’m afraid it will have an impact. If those trends are solidified in legislation, that will have an impact, absolutely.”
On the other hand, global commerce has come so far that it’s hard to reverse, and U.S. policies may complement the more recent trends.
“The world has been acting in a way that it’s difficult to somehow radically change. Processes are completely integrated. The economy is globalized. Dismantling that is really difficult,” Ortega-Lamela said.
In the end, the forces for effective commerce will spell what happens, she feels.
The International Business Council works to open doors to allow smaller- and medium-size companies to gain access to international markets. It is one of seven subcouncils of the Illinois Chamber of Commerce, which the state’s biggest voice for businesses of all sizes and industry sectors.
The IBC was formed three years ago to help businesses compete on the world stage.
“We realized companies, more and more, are affected by federal regulations and policies that have to do with international agreements,” she said.
Illinois ranks third or fifth among the 50 states in exporting, depending on the goods being tallied. Illinois is No. 1 in foreign investment in the Midwest, primarily because of the presence of Chicago.
More than 23,000 Illinois companies currently export goods and services, according to recent numbers from the International Trade Association. Exports from Illinois helped contribute to the $2.26 trillion of U.S. exports in 2015.
The Chamber’s IBC monitors all this closely. From exporting to Cuba, to immigration reform, to the current debate over the Trans-Pacific Partnership, the council has an interest. The agency has taken companies to visit the Illinois congressional delegation in Washington, D.C., on multiple occasions, as well as hosted relevant meetings and educational sessions back home, to talk over current issues.
The IBC has an exclusive partnership with the U.S. Trade and Development Agency.
“Through the Chamber we will be getting specific contracts and tenders (formal invitations to submit bids) that will be passed along to companies in attempts to build their exporting of both goods and services in developing markets,” Ortega-Lamela said.
The council has worked to establish partnerships with other countries, from Ecuador to Brazil to Japan to Peru. “Name it, we have access to a portfolio of opportunities for business leads that I immediately attach to our companies. Without our help in providing this context and access to information it would be very, very difficult.”
The IBC last month won a Governor’s Export Award in the category of Export Awareness and Development for its efforts to show off the state around the world. One of its notable successes, W.S. Darley (a fire equipment and services business in Itasca) also received an award for continuing excellence in exporting.
“We have a few small- to medium-size companies that have been tremendously successful. W.S. Darley has been very successful in opening markets in Africa. I’m working with them on facilitating others. They have an interest in Cuba and they have an interest in Ecuador,” Ortega-Lamela said.

Many eyes are on Cuba

A lot of Illinois companies have an interest in Cuba
“Even before President Obama announced warming up of relations with Cuba (in December 2014), we were working with the Illinois Cuba Working Group and the Illinois Soybean Association. We had put together a program to educate the stakeholders and promote policies that are conducive to our businesses, especially the agricultural business, exporting to markets like Cuba. We see a phenomenal opportunity, especially in the awakening of the island opening to business. And the possibility of it having a tourism boom.”
Twice, she accompanied members to Cuba, representing three main exporting sectors — corn growers, medical device makers and logistics operators.
She described the outcomes as “interesting, I will say. I think we became better educated. Just because the United States is somehow changing the rules a little bit and providing for the opportunity for some companies under certain circumstances to do business in Cuba doesn’t mean Cuba is somehow changed or altered in any way.
“They have to factor in that when they arrive to the island they need to do business according to the Cuban rules and regulations. And those are not easy,” she said. “We are talking about a common-law system. We’re talking about regulations that are very old and many, many commercial codes and regulations. Those have a lot of traditions that are quite difficult to change. Add to that the fact that this is a Communist state. Most of the commerce is not just regulated, it’s done by the state or state companies.”
She added: “It really is quite difficult to understand how to actually do business there. Some of the companies that came with me were lucky because of my own personal background. Speaking Spanish, I relate to them. Being a Spanish attorney born in Madrid, my training is in civic code systems. It made it easier for me to understand the rules, regulation and philosophy. How the commercial registry works, things like that.”
Illinois and the rest of the country will eventually be a major partner again with Cuba, she feels.
“A lot of it will be a force of commerce coming in, not just from the United States and entrepreneurs from within the island, but also from Spain, Brazil, Germany, Japan, China. There are definitely other countries, pushing and pushing hard to do business with the island. It will come, by necessity.”

On the other side of the world, of course, is a potentially bigger trading bloc — the Pacific Rim and the dozen countries (notably, not China) that are involved in the proposed Trans-Pacific Partnership. Trump has said America would withdraw from the deal, which has not yet been ratified by Congress.
Trump has also threatened the possibility of renegotiating existing trade pacts around the world, with the expressed thought of getting better deals for American companies. Critics are raising the specter of international trade wars.
Ortega-Lamela hopes the new administration proceeds cautiously.
“Obviously, it is something that has to be well thought out by his team, this idea of changing or altering trade policies. From the perspective of our members and specifically the agricultural sector, TTP will be very beneficial. It would open up markets, particularly Japan, that have been very difficult for our agricultural businesses to access.”
Japan’s average tariff on agricultural products is 14 percent. Most of the tariffs would be eliminated under the TTP agreement as negotiated, and some quotas limiting volume of exports will be eased. Ortega-Lamela said the U.S. is a huge exporter of beef, rice and milk to Japan.
“The majority of our members, from manufacturing to agriculture particularly, are pro-TTP. There could be a better deal in place, from the standpoint, for example, of pharmaceuticals. But in general, with some improvement — which could be done with side agreements — it was a beneficial agreement,” she said.
The deal negotiated under the Obama administration would have standardized some of the technical regulations “that would make our companies very competitive and would have placed us at the same level as everybody else,” she said.
But the rules of the trading game are about to change, and no one is quite sure what Trump will propose.
“We have heard some of the rhetoric but we haven’t seen any real policy proposal,” she said. “Some of the changes can be done by the administration but the big changes will require the participation of Congress and we expect there to be some debate.” The new Republican majority in the House and Senate is expected to be supportive of continuing free, but fair trade.
The next four years will be just as important for the International Business Council as the previous three. Exports are the fastest-growing segment of the Illinois economy.
“We have over $63 billion per year in specific trade agreements, like NAFTA,” she said, citing the most recent figures from the 2014-15 fiscal year.
Companies using the IBC to access foreign markets bring “a little bit of everything” to the table, from communication to networking to financing to understanding international markets.
Each case is different, and many companies stumble at various stages along the way.
“Some people want to export and they don’t know why, where or how. Others are already exporting and realize they got into it without having a plan or structure. I will sit down with the companies see where they are at and where they want to be — and why,” Ortega-Lamela said.  She focuses on trying to find cost-effective, time-saving solutions.
Each year the IBC puts on a one-on-one, “how-to-export” conference. Four distinct areas are addressed — financing, taxation, logistics (moving goods) and legal.
“Those are areas that people need to have very clear before they jump into exporting. In the middle is all the licenses and compliances, etc., that definitely can have an impact,” she said.
While the International Business Council has access to the support staff of the Chamber, Ortega-Lamela is otherwise the only person designated to the IBC. That makes the outside partnerships she has established that much more important.
“We have a lot of partnerships with trade commissions, consul generals or commerce or economic offices at various embassies,” she said.
Many countries crave the goods of the United States.
“The impact to the middle class is spectacular. The bottom line is if we don’t take advantage of these new customers, somebody else is going to do it.”