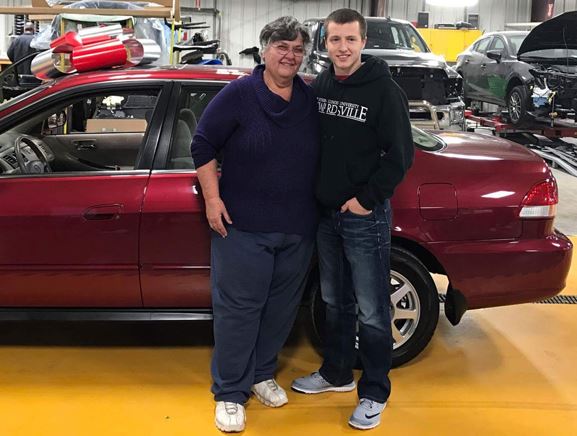 Smiling in front of her surprise Christmas present are Debbie Hettinger, left with Anthony Hettinger.

It was because: “She’s given me everything, when she had hardly anything,” that Southern Illinois University Edwardsville senior Anthony Hettinger entered a radio contest to win a car for his adopted mother, Debbie Hettinger, a car. And he won.

Newell’s Auto Body in Decatur made it possible for Hettinger and a few family members to surprise Debbie on Dec. 9 with a red 2002 Honda Civic, topped with a big red bow. The Christmas present allowed the 65-year-old single mother, who works as a school bus driver and home daycare provider, to retire her gold 1999 Chrysler 300M with 263,000 miles.

Hettinger gave his mother his old car two years ago after he bought his blue 2008 Chevrolet Malibu. “My Chrysler was really bad. The heater didn’t work. The windows didn’t work. The driver’s side door handle didn’t work, and I used a shoelace to open the door. I didn’t trust it to make the drive to Edwardsville, so I got another car and gave my mom this one. If I had money, though, I would have bought her a new car, because she deserves it.”

So, when Hettinger heard about the contest to win a vehicle, he jumped at the chance.

“I was on my way back to school on Nov. 27 from Thanksgiving break, and I was listening to 95Q (Now Decatur country radio station),” said Hettinger, of Lovington, who is majoring in both criminal justice and business administration. “Newell’s Auto Body was giving away a reconstructed car, and you had to nominate someone online. I immediately thought of my mom.”

That night, Hettinger – one of Debbie’s five adopted children – went online and wrote 998 characters out of the allotted 1,000 detailing the virtues and loving traits that he says characterize his mother.

“I was so shocked. I didn’t know what was going on,” said Debbie Hettinger. “At first he told me that he had an appointment with the Department of Children Family Services. And then he said he had to stop in Newell’s because he had a brake light that needed repaired.
“My old car was just hit and miss. When we were in it, we prayed a lot. But we didn’t let it keep us from going places. We loved coming to SIUE’s Family Weekend. We came the last two years in the gold car.”

Anthony entered Debbie’s life at an early age. A foster mother to many other children throughout her life, Debbie took him in as a foster child at the age of 13 months.

“She fostered me until the age of eight, and then she adopted me,” Hettinger said. “She has fostered many other children, besides me. She took in all kids, no matter their race or ethnicity.”

“I just wanted to help kids out,” she said. “I used to work at Kmart, and a lot of kids came in who needed help. Many people would talk about the children who were in need of care. So, I started being a foster mother.

“You don’t do it for the money. You do it for the love. I never requested any type of particular kid. I just took whomever they sent me.”

“She’s so deserving of this gift and more,” Hettinger said. “She has kept opening up her home and her heart to children who needed her.”

— From the Illinois Business Journal via SIUE news services