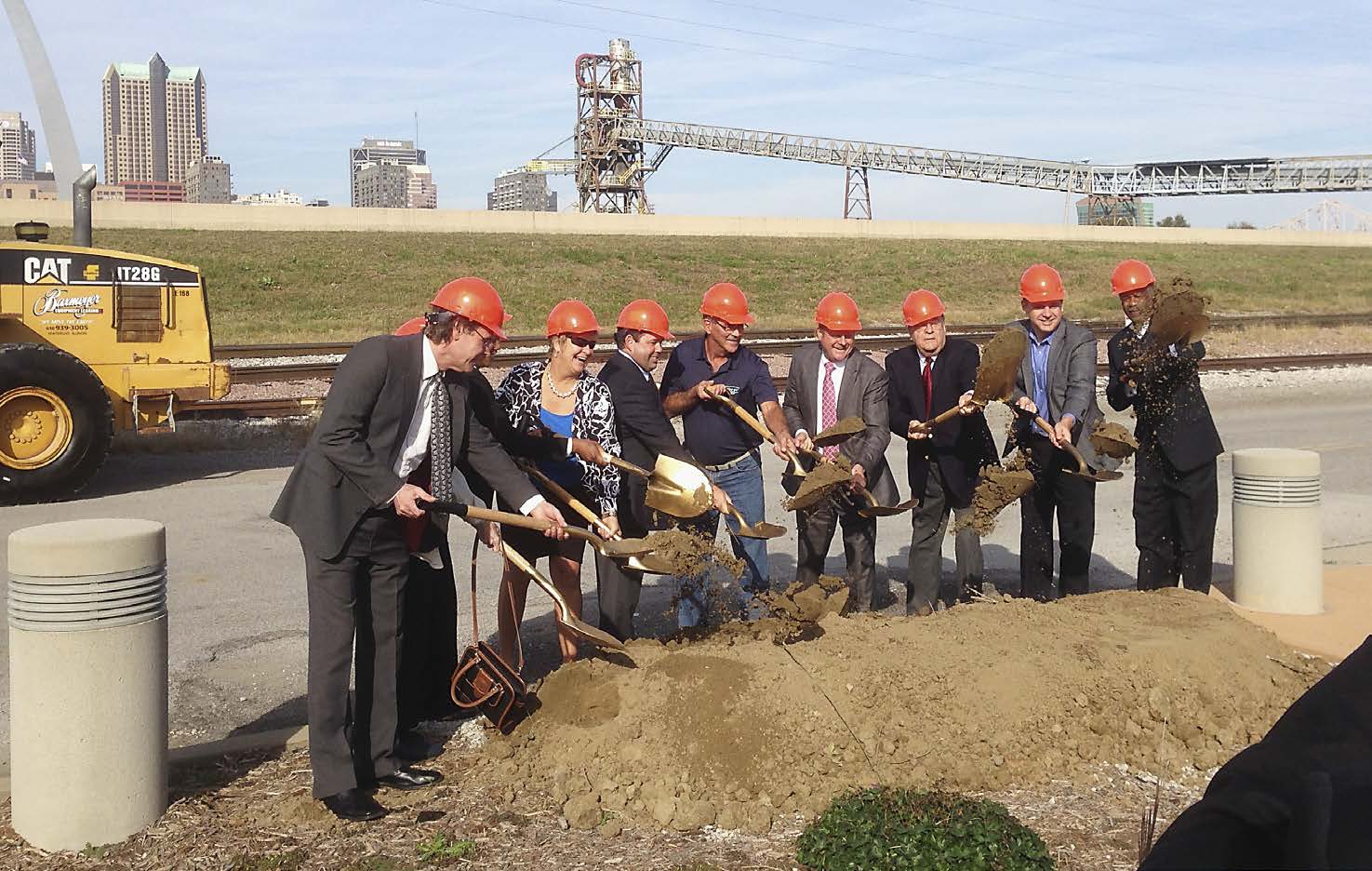 By DENNIS GRUBAUGH
EAST ST. LOUIS — Officials hope an $8.1 million public-private partnership to revamp infrastructure also stimulates development of the city’s riverfront.
“It should be a magnet for additional industry,” St. Clair County Board Chairman Mark Kern said.
Officials broke ground last month on the first phase of the River Bridge District Project, which involves a mile-long overhaul of Front Street, from Trendley Avenue in East St. Louis to its dead-end in Fairmont City. Because Front Street is a key riverfront corridor, it will serve the burgeoning commercial traffic being generated by two major grain businesses, Cargill and Bunge-SCF.
In addition to improving Front Street, the project will address some connecting roads and also open up several hundred acres of undeveloped, newly accessible ground that is considered appealing to other agribusiness and distribution companies.
Cargill, Bunge-SCF and the nearby Casino Queen are all contributing $500,000 to the project. Other backers include the Economic Development Administration, $3,537,052; the Illinois Department of Transportation (TARP funds), $124,795; the Southwestern Illinois Development Authority, $1.5 million; St. Clair County Transit District, $900,000; and the Metro East Park and Recreation District, $500,000.
The project is considered the final piece of major infrastructure improvements in that area that began with the 2014 opening of the Stan Musial Veterans Memorial Bridge and are continuing with the relocation of Illinois Route 3.
Illinois American Water Co. has already built a 36-inch water line alongside Front Street to replace a pair of 20-inch lines that now run under Front Street, which will allow for the roadway to be reconstructed. One of the 20-inch lines will then be “sliplined” and used as a backup for the larger line.
The road will be widened to 30 feet from its existing 20-24 feet so it can better handle heavy truck traffic. An estimated 400 trucks currently use the road and that number is projected to grow by 30 percent given market conditions.
The project will also include the resurfacing of Trendley Avenue from Front Street to Main Street; the reconstruction of West Missouri Avenue from Front Street to B Street; and the reconstruction of B Street from Missouri Avenue to River Park Drive.
All of those streets will be 24-feet wide when finished.
The work is expected to improve safety and access for patrons and employees who use River Park Drive to access the Casino Queen. Improvements to the secondary roads — and a new spur from relocated Illinois Route 3 — will allow truck traffic to avoid River Park altogether.
A new roundabout is planned on River Park Drive near the casino and aims to further cut down on traffic congestion. That is included in a second phase of the project.
As part of the rebuilding of Front Street, a separated lane for pedestrian and bike traffic will be built and will tie into the park. There will also be installation of street lights.
East St. Louis Mayor Emeka Jackson-Hicks said the road upgrade serves the existing businesses and gives the city access to hundreds of acres of developable land.
“As mayor, I have to ask myself, what else can such a project bring to the citizens?” she said. “I like to think of East St. Louis as a city on its way up.”
The City Council asked for and got a pledge from the project team to increase the minority contractor participation on the upcoming construction from 12 percent to 20 percent, the mayor said.
Cargill has been in business on Front Street many years. Bunge-SCF built a new facility, further north on Front Street near the Stan Musial Veterans Memorial Bridge, that it opened just two years ago.
Kern said the project will allow more immediate access to the national and international grain markets.
Jim Nations, chairman of the Southwestern Illinois Development Authority, said the unique public-private partnership is just “the kind of growth that SWIDA hopes to be involved in, serving the growth and economic expansion of the community.
Not only will the project provide improved highway connections “but it will prime this area for continued business growth and jobs — both construction and living-wage employment,” Nations said.
SWIDA will be in a position to offer low-interest, tax exempt bonds to businesses willing to locate along the riverfront, he said.
Fred Oelschlaeger, the regional manager of Cargill, told the Illinois Business Journal that the project fits in well with the entire Metro St. Louis area’s reputation as “a huge transportation hub. This project will effectively enable us to separate truck traffic from traffic going to the casino. They are moving a water line that feeds areas to the south of here. It’s an enabler.”
For the farmers of Illinois, Oelschlaeger said, the improved access to the grain shippers “is kind of a big deal.”