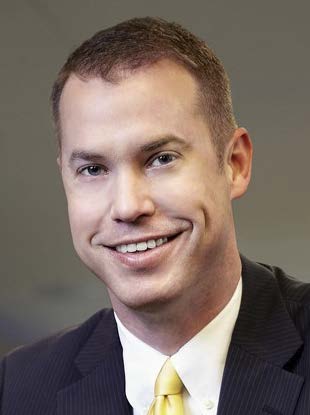 Philip Lading enjoys the intellectual challenge of the law. He loves getting a complicated issue and figuring out how to resolve the situation.
“I get a sense of personal satisfaction knowing that at the end of the day I’ve helped people navigate their way through a complicated system,” he said.
He once thought about going to med school. While attending Illinois Wesleyan University in Bloomington, he was a biology major before switching to English because he didn’t enjoy the hard sciences. During his senior year, he was evaluating his post-collegiate options when he and a friend decided to take the law school admission test for fun to see how well they’d score.
After graduating in 1996, he attended Saint Louis University School of Law and received his law degree in 1999 and opened his own practice before joining Sandberg Phoenix in 2008. They were opening an Edwardsville office and asked him to join them.
He maintains an active practice and compares it to a buffet rather than a single-course meal. He enjoys municipal work and serves as the village attorney for several small towns. He focuses on business, family law, real estate, employment law and civil rights.
“It keeps me engaged,” he said. “It’s hard to imagine doing anything else.”
When he was growing up, his parents gave him a lot of latitude and the freedom to make his own mistakes. It was all right to fail. “It forced me to be accountable,” he said.
His mother was a huge influence. She was a stay-at-home mom who raised three children before going back to school and earning two master’s degrees while working 40-plus hours a week.
“I have no clue how she did that,” he said.
He said it’s important to be engaged in your community, and he’s actively involved with H.I.S. K.I.D.S., a local not-for-profit based in Highland that works with children and their families who are dealing with cancer, and serves on the board of several organizations.
“You have to make everything around you just a little bit better,” he said.
An Edwardsville resident, he enjoys competing in triathlons, cycling and running. His three sons are a huge part of his day to day life. “They’re amazing to be around,” he said, and he enjoys watching them growing, learning and excelling at what they do.
“It’s important to do what you’re passionate about,” he said. “If everybody did this collectively the world would be a much better place.”