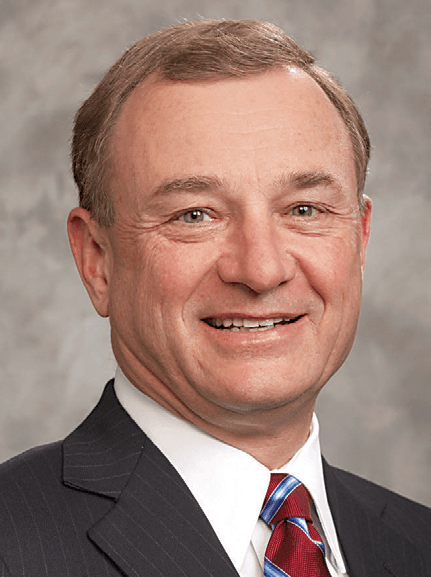 When he was young, Pat Mathis would go on house calls with his dad and he thought that he would follow in his dad’s footsteps and become a doctor. He has an undergraduate degree in chemistry from Saint Louis University.
“It wasn’t where my heart was,” he said. “I wasn’t that interested in science.” When he told his dad, it struck fear into his heart but his dad told him to do what he wanted in life and he would support him.
He had taken a few business classes and really enjoyed them so he went on to get his MBA at Washington University, where he combined that degree with a law degree.  After receiving his law degree in 1978, he earned a master’s degree in their tax program.
“Life isn’t a straight path,” he said.
After law school, he went to work as a tax attorney for a Belleville law firm where he handled hundreds of tax cases.
“I learned a lot quickly,” he said of the five years he was there. He opened Mathis, Marifian & Richter in 1984 with George Marifian and Kevin Richter, and the firm has grown from three to 22 attorneys.  In 2011, it merged with Coffey and McCracken in Edwardsville.
“There aren’t a lot of firms that do what we do,” he said. The firm provides legal representation in banking, bankruptcy, business law, business succession, civil and commercial litigation, elder law, employment law, estate planning, mediation, real estate law, taxation and worker’s compensation.
His practice focuses on tax law, business law, estate planning and banking.
“It’s an intellectual challenge,” he said, and enjoys tax law because it combines his business and legal backgrounds.
Born and raised in Pinckneyville, he and his siblings had a good childhood. His parents taught him that to be successful, you need self-discipline. They instilled in him the value of hard work, discipline and social justice, and he has passed these values on to his two children.
He and his wife live in Belleville.
“I’m very lucky,” he said, adding family is very important. He raised his children to know that failure is just a change in direction and to be open to change. “You have to accept it as an opportunity rather than a failure,” he said.
Giving back to the community is important to him.
“Working with people who need services is very rewarding,” he said, and he is involved with a number of local charitable organizations. It’s our responsibility to make the world a better place.
“It’s important to be open to wherever life takes you,” he said.