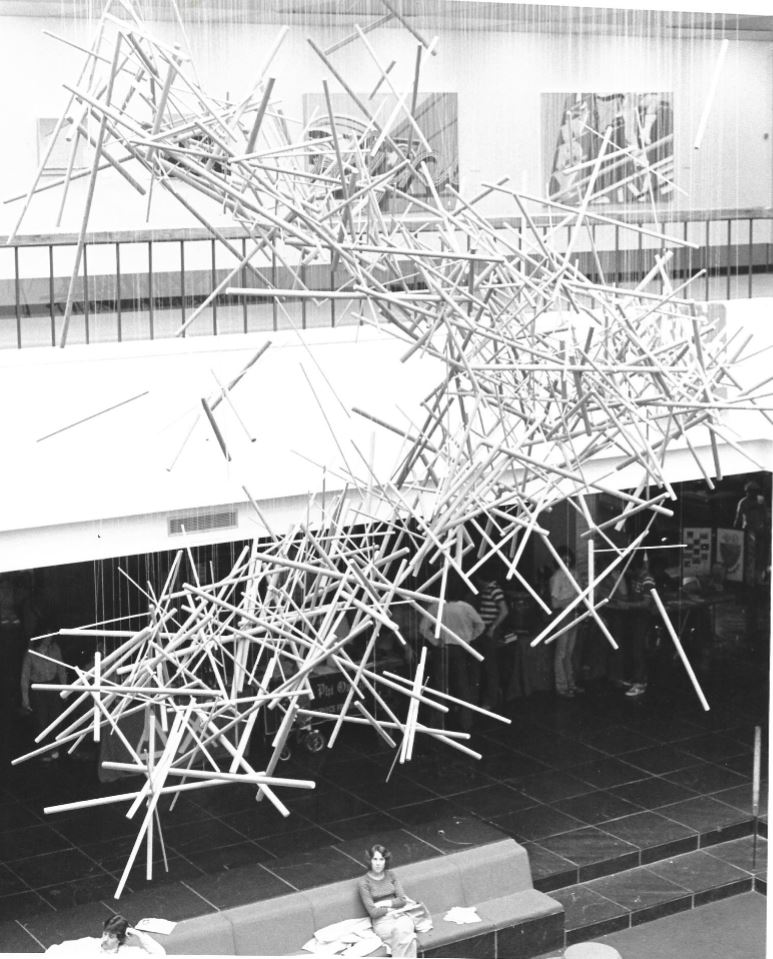 A 1967 photograph features the Plumb-Bob, a sculpture that became an iconic piece of SIUE history.

For almost half a century, it has been suspended in the atrium of Southern Illinois University Edwardsville Morris University Center’s Goshen Lounge, subtly moving with the flow of air and watching over gathering students, events and celebrations.

Plumb-Bob, created by renowned artist Yasuhide Kobashi, is an iconic sculpture that has beautifully graced the “living room” of campus since its installment in 1967, when construction of the Goshen Lounge was complete. The space was designed specifically to complement the grand-scale work of art.

Work was to begin this week to carefully remove the sculpture, piece by piece. It will be transported to a professional conservation firm for cleaning, repair and restringing.

“With a commitment for renovation of the Morris University Center in the works, the University Museum has embarked on a project to restore the sculpture,” said Erin Vigneau-Dimick, collections manager of The University Museum and lecturer in the Department of Art & Design. “The detailed professional treatment will insure that Plumb-Bob can once again hang as an iconic aspect of the SIUE campus.”

Arnold Maremont, who was appointed a trustee of Southern Illinois University in 1961, had a passion for art. He was instrumental in the planning of SIUE’s campus and championed the idea of “the role of the plastic arts in the design of a campus.”

Campus architects Gyo Obata and Jack Randall were also in favor of art having an important presence as part of the campus. The two traveled to Pittsburgh at the request of Maremont to view Plumb-Bob where it was installed at the Carnegie Museum of Art.

The Maremont Foundation purchased the legendary piece in 1962 and donated it to the University. It was stored at Southern Illinois University Carbondale until the Goshen Lounge was complete.

Randall sent a letter to the artist Yasuhide Kobashi inviting him to campus to install his work, in which he wrote in part: “Your piece will be a central influence and will have a major effect on a very heavily trafficked student facility.”
Kobashi did indeed travel from New York to visit campus. He and a team of SIUE facilities staff worked with two sets of scaffolding, one on each side, and installed Plumb-Bob. The mobile hangs from a height of 28 feet and descends approximately 18 feet from top to bottom.

It is comprised of 480 wooden dowels ranging in diameter and length, and according to Vigneau-Dimick, is “strung with original nylon monofilament, such that each strand has a pair of dowels attached, one at each end so that they are in balance with each other.”

In a 1968 original statement about his work, Kobashi wrote: “I have created sculpture which has lightness as its essential quality: it is created from mysterious matter suspended in air. This matter is ordered within space which I have taken out from a given area. The stretched elements act like magnetic forces, pulling against each other to form surface tensions like those created by the pouring of oil on water. They flow and create their own rhythm.”

He continued: “With this system, the rigidly ordered shapes of art are a thing of the past, and creation becomes an activity of infinite possibilities. The basic concept is not solid but plastic, a creation which has as a major characteristic the possibility of movement.”

Obata’s global architectural firm, HOK, is still based in St. Louis. In an interview with Vigneau-Dimick on Wednesday, Nov. 16, he described the design of the Goshen Lounge as a central meeting space in which students can come together and then move outwards into other activities.

He emphasized that light and space are the center of any architectural design. Therefore, Obata stated, his role is to “provide spaces which are not only functional, but also enhance the quality of life for those who work and live in them.”

“That premise is borne out in the inspiring, airy vertical space of the Goshen Lounge and reflected in the composition of Kobashi’s Plumb-Bob,” Vigneau-Dimick said. “Depending upon the time of day and angle of view, the sculpture shifts in tonal and structural ways. Soft natural light strikes the hundreds of lines which hang from the platform, at times creating the appearance of falling rain.”

The University Museum is responsible for the care and display of SIUE’s extensive collection of cultural objects. University Museum staff worked carefully to dust, wax and repair the unique mobile in 1988 and 2003, and will now be highly involved in the removal and restoration processes.

— From the Illinois Business Journal via SIUE news services