ALTON – Simmons Hanly Conroy has announced that Karoline Carstens, a mesothelioma attorney in the firm’s Asbestos Department, has been selected by the Law Bulletin Publishing Company as one of its 2016 “40 Illinois Attorneys Under Forty to Watch.” 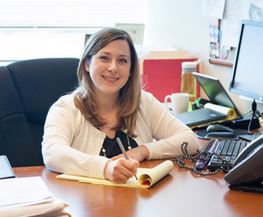 “The firm congratulates Karoline on this recognition of her many client successes and achievements as a young attorney,” said Perry J. Browder, a shareholder and head of the Asbestos Group at Simmons Hanly Conroy. “Karoline also embodies the spirit of this honor because of her passion for her work and her commitment to helping her community through her many pro bono and service projects.”

More than 1,300 nominations were considered for the 17th annual edition of the award that recognizes 40 of the “most talented young attorneys practicing in Illinois.” Attorneys are evaluated on their lawyering skills, career achievements and contributions to the community and to the profession, as well as how quickly they have risen within their areas of practice. All honorees are under age 40 prior to May 1, 2016. LBPC publishes the Chicago Daily Law Bulletin and Chicago Lawyer magazine.

An associate at the firm since 2006, Carstens focuses her practice on helping those affected by asbestos-related diseases, such as mesothelioma, and has helped to recover hundreds of millions of dollars for her clients. Carstens previously worked in the firm’s Complex Litigation Department prosecuting consumer class action, Qui Tam and pharmaceutical cases.

Prior to joining the firm, Carstens served as an intern at the McLean County, Ill., State’s Attorney’s Office and as a legal assistant at Robert Half Legal, working on a lead poisoning case. She earned her law degree from Northern Illinois University, where she externed at the Zeke Giorgi Legal Clinic in Rockford, Ill., and served as vice president of the NIU chapter of Amnesty International. NIU awarded her its 2016 Young Alumna Award. Carstens also holds a Bachelor of Arts from Illinois Wesleyan University.

Carstens’ community service includes her work procuring sponsorships to benefit the Children’s Assistance Fund as a member of the Young Lawyer Division Section Council of the Illinois State Bar Association, which named Carstens as a Young Lawyer of the Year for 2016. She also is a founding member of Young Friends of Land of Lincoln Legal Assistance Foundation and serves as chair of that organization’s annual CLE Committee. For Simmons Hanly Conroy, Carstens work supported the development of a pro bono program associated with the Madison County Pro Bono Guardian Ad Litem Program and the John Marshall Law School Veteran’s Legal Support Center Pro Bono Attorney Network. Her service to the pro bono program garnered the firm the Veterans Pro Bono Service Award in 2009 from the Supreme Court of Illinois and John Marshall Law School. Carstens also volunteers her legal services through the Madison County Legal Advice Clinic.