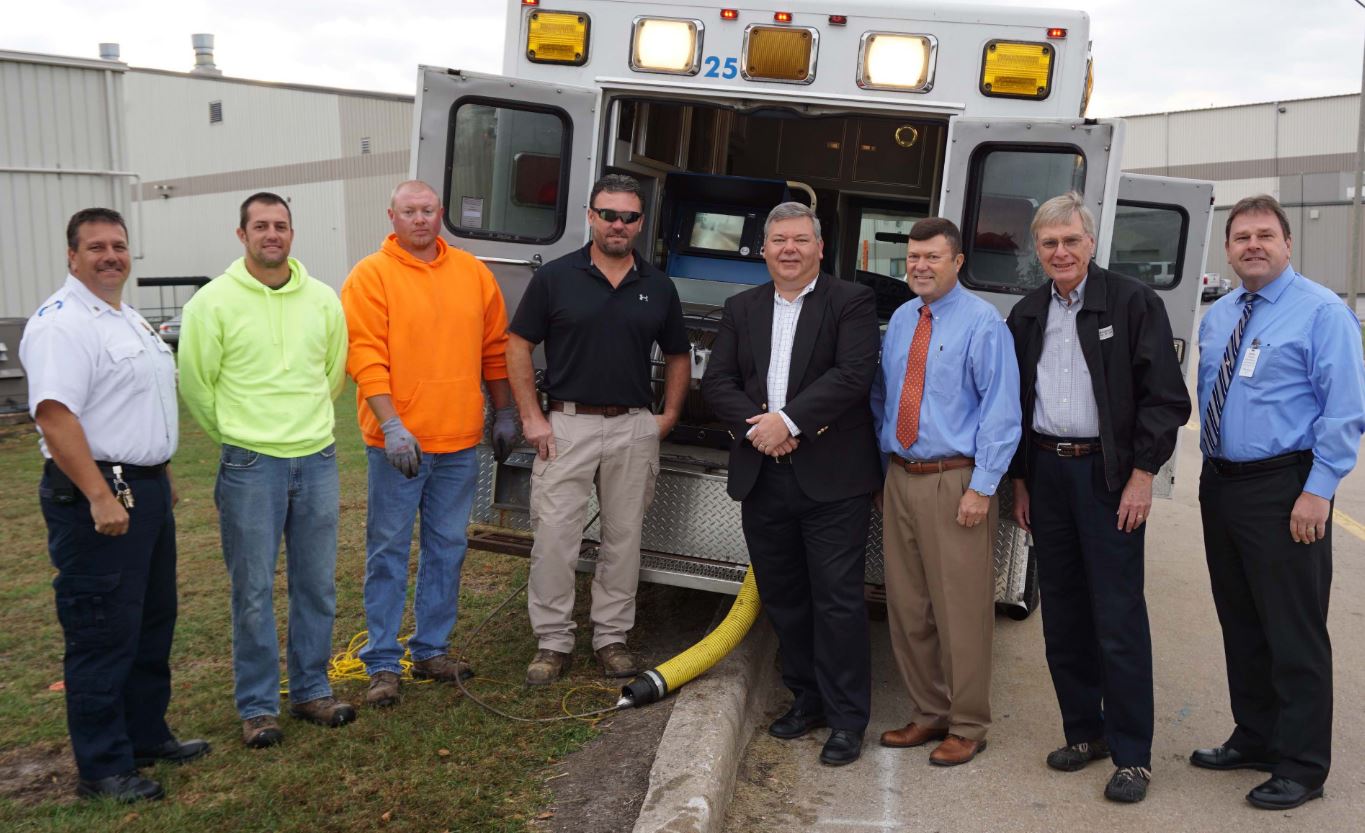 Alton Memorial Hospital officials stand with employees from the village of Bethalto with the AMH ambulance donated to the village for use in its Public Works Department. Fourth from the left is Rod Cheatham of the Public Works Department, with two of his employees to the left and Bethalto Mayor Alan Winslow to the right. At the far left is Jason Bowman, AMH EMS manager. Next to Mayor Winslow, left to right, are AMH President Dave Braasch; Ken Balsters of the AMH board of directors; and Bryan Hartwick, vice president of Human Resources.

ALTON – Alton Memorial Hospital ambulances can still serve a community’s needs even after they are removed from traditional ambulance service. Just ask the village of Bethalto.

With the Alton Memorial Health Services Foundation’s annual Duck Pluckers Ball raising enough money to put a new ambulance into service each year, older ambulances are taken out of service. AMH donated one of those ambulances to Bethalto late in 2015. The city has just brought it online in its Public Works Department. The vehicle now houses a generator, 1,000 feet of cable and a robot that the sewer team uses to lower through manholes and run through miles of sewer pipes, helping to locate broken seams in pipes.

“We are very appreciative of the ambulance donation by Alton Memorial,” said Bethalto Mayor AlanWinslow. “Because of the space, layout and electrical system enhancements of ambulances, they are the perfect vehicle for the video inspection system that we are using to inspect our underground pipes. Having this mobile system available now allows our crews to inspect several hundred feet of pipe per day and to pinpoint the exact location of cracks, joint separations, collapses, and other faults in the network of pipes. “

Problems can now be fixed in a matter of hours instead of having to dig up ground and guess where problems are. It also saves in the cost of water treatment. When ground water leaks in, it is mixed with the sewer water sent to sewer plants. Keeping the ground water out of the pipes is estimated to save Bethalto a considerable amount of money in water treatment costs.

“Having this capability now relieves us of guesswork and lots of digging,” Winslow said. “This system is a considerable asset to the Village that will provide a very positive impact on the quality of life of our residents. Using this system to identify ground water infiltration of the sanitary sewers will help us to make necessary repairs to stop sewer backups and to reduce the amount of wastewater that we pay to have treated.

“We fully expect that by the time we have repaired the entire system, our monthly treatment expense of approximately $35,000 will be reduced by 40 percent to 60 percent. The donation of the ambulance has saved us a considerable amount of upfront costs on the system and allowed us to put the system in use in a timely manner.”

— From the Illinois Business Journal via Alton Memorial Hospital news