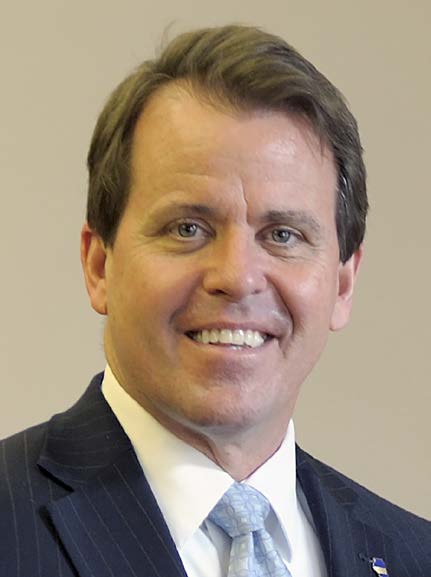 IBJ: To this point, First Mid-Illinois Bank and Trust has had a limited presence in Metro East. What is the history of the bank?

Dively:  Our presence in the Metro East started about the same time as the Illinois Business Journal was founded. We acquired a Highland bank in 2001. But we are the oldest national bank in the state of Illinois. Last year we celebrated our 150th anniversary.  We’ve seen a lot of economic cycles over those 150 years. We had a lot of fun celebrating what was a pretty major milestone for a business to remain right here headquartered in Mattoon, Ill., for 150 years.

IBJ: You recently acquired First Clover Leaf Bank in Edwardsville? How many branches does that give you now?

Dively: With the acquisition of First Clover Leaf Bank we are now at 53 branches in 37 communities. Basically, our footprint is the bottom two-thirds of the state of Illinois. We cover Central Illinois, Southern Illinois through an expansion we did last year, and now the Metro St. Louis market.

IBJ: What was last year’s acquisition?

Dively: In August of 2015 we acquired 12 branches in Southern Illinois, including Carbondale, Carterville, Harrisburg, Marion, Mount Carmel, Lawrenceville and Carmi. Old National Bank headquartered in Evansville elected to get out of the state of Illinois and we were excited to expand into those markets.

IBJ: Was First Mid founded primarily as a farmer’s bank?

Dively: The basic function that we served 150 years ago isn’t a whole lot different from what we do today.  It was to provide a safe place for businesses and individuals to deposit their money and then we turn around and invest it back into the same community. We are an Ag bank; however, it is becoming smaller as a percent of our total loans, but we have the lending expertise for the agriculture market. It is a focus of ours across our footprint.

IBJ: The acquisition of First Clover Leaf Bank has substantially increased your footprint here in the Metro East.

Dively:  It certainly has. It has been a strategic objective for a long time to expand our St. Louis Metro East presence. We closed on the acquisition Sept. 8. We are very excited to expand that with seven additional banking centers. We are looking forward to maintaining the real strong relationships that the First Clover Leaf Bank team has built with their communities and we are looking forward to expanding services to our First Clover Leaf Bank customers.

IBJ: One of those is over in Missouri?

Dively: We have a small branch, but a great team in Clayton, Mo. We are really excited to be able to expand our footprint outside of the state of Illinois for the first time.

IBJ: So, what was the attraction here? I’ve always heard we were overbanked.

Dively:  Well, we are. I think the state of Illinois has more banks than any other state in the union. Texas and Illinois are right at the top. So clearly it is a competitive market. That speaks to the need to expand the depth of our presence within the market. When we think about where we would like to expand, the Metro East was at the top of our list because it is a growing market.  We’ve looked at lots of acquisitions over the years. We are pretty picky about acquisitions and making sure it is the right fit. The First Clover Leaf Bank team, the people, the culture and the market, were certainly very attractive to us. There was real alignment between what their board and our board believe is the role of a community bank.
Now we can take our expanded services, which include trust and brokerage services, farm management and retirement plans, and combine them with the really strong franchise that exists in First Clover Leaf Bank and expand those customer relationships with additional products and services that are not there today.  We also have an insurance subsidiary that provides competitive solutions for insurance needs for both businesses and families, so everything from group health, to auto, life, cyber risk management and senior solutions.

IBJ: With your growth, do you still consider yourself a community bank?

Dively:  Yes, absolutely. To me you can define community banking by an asset size but I think it is just as much defined by the mentality of the organization. It is in our long-term vision that we will always remain a community bank. That means putting decision-making with local leadership and giving them the latitude to make decisions, to be responsive to the community, and to be involved in the community. Our team is involved, just like First Clover Leaf Bank, as leaders and volunteers.  They put their time and money into what’s important locally. It is not dictated from corporate. Year to date we have given back over 11,000 hours of community service just in our legacy markets. First Clover Leaf Bank has a team that is dedicated to community service as well. They call it their Green Team. That was one of the things we saw that made us believe we think alike and there was the alignment that would make the merger a great fit.

IBJ: Is the First Clover Leaf name going to change?

Dively: Yes. We will be converting all the accounts in the system from First Clover Leaf to First Mid. That’s going to happen sometime around the end of the first quarter of next year. Our customers are going to continue to be served by the same familiar faces but we can expand the resources and the services we provide to the customers, so I think the changes they will see, that will include a name change at some point, will be nothing but positive for our customers and the communities down your way.

IBJ: Do you have expansion plans for the Metro East market?

IBJ: Will there be personnel changes in the Metro East market?

Dively:  Like most acquisitions the CEO and CFO stepped away at the time of the close; however, Lisa Fowler, the chief credit officer at First Clover Leaf Bank, will become our regional president, which will include our legacy Highland and Maryville branches. Dennis Terry, who is a former CEO, remains as the senior vice president and will be part of my executive committee to ensure that we have a strong voice on the leadership team for the Metro East. We are really delighted with the team that we have going forward and think the combination of First Mid and First Clover Leaf Bank will be great for the customer base and for the communities.

Dively:  We have been a public company for many, many years but we were traded over the counter. We made the move in 2014 to list on the NASDAQ. And with the 2015 capital raise supporting the 12-branch acquisition that I mentioned in Southern Illinois, for the first time we expanded our shareholder base to include institutional investors. It has really proven to be a great couple of strategic moves for us. Our stock price is up nearly 50 percent since the first of 2015. And, maybe just as important, there’s much more liquidity in our stock. We’ve gone from trading a few hundred shares a day over the counter to now I think we are trading about 25,000 shares a day. I’m really excited about what that means for our current shareholders and our ability to have a strong currency to do future acquisitions. When we tell our story one of the things we love to say is that we believe in a competitive dividend. We have had a consistent dividend since ’79. That’s 1879. It’s our 150-year history, but it speaks to our strength, our commitment to the community and to our shareholders.