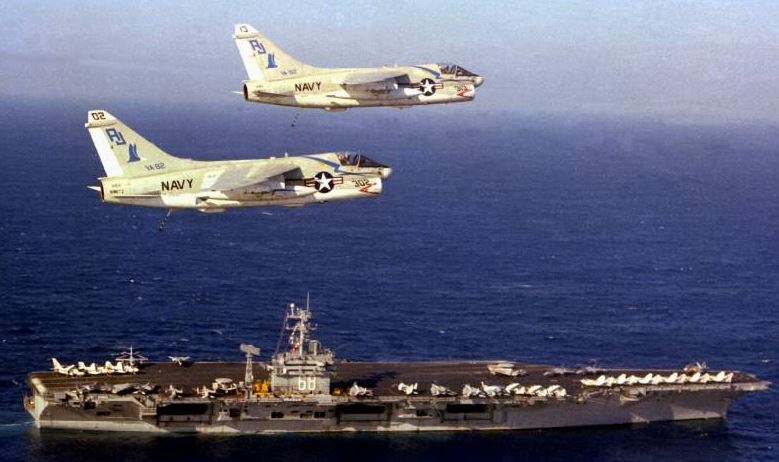 Two A7 Corsairs soar above the USS Nimitz in 1979. The top aircraft, plane 303, is on display at Edwardsville Township Community Park and will be restored with the help of the Flight Deck Veterans Group, a national veterans organizations that restores historic aircrafts.

The Township Board approved a contract with the Flight Deck Veterans Group, a nationwide nonprofit organization based in Tennessee that restores aircraft as a part of its mission of veterans serving veterans and to pass on the history and legacy of veterans and flight deck operations.

“This agreement is the culmination of a multi-year project to restore our historic aircraft,” said Miles. “In late 2013, we were approached by a small group of Township residents who were interested in restoring the aircraft. We established a Community Fund with the Edwardsville Community Foundation so residents could make tax-deductible contributions. Earlier this year, we launched Mission: Preservation, The Campaign to Restore the Plane, a three-tiered approach to raising the funds necessary to restore the aircraft to ‘display ready condition’ as defined by the U.S. Naval Aviation Museum, from whom the aircraft is on loan from. The approach included contributions from businesses, residents, and the township. The campaign has really rallied the community around the project and brought new volunteers and veterans to the project as well.”

Working with the Flight Deck Veterans Group, the township will determine the period of service the aircraft will be restored to. “We have learned that our aircraft took her maiden cruise in 1975 off the deck of the USS Nimitz, where she was stationed until 1980. In 1982, our aircraft served on the USS JFK and from 1984 to 1996 she served on the USS Saratoga. All deployments for our aircraft were Mediterranean cruises,” Miles said.

“As we learn more about our historic aircraft, we want to know how our residents are connected to the aircraft or to A7 Corsairs. Maybe their family member served on the USS Nimitz during this time or helped to build or repair A7 Corsairs. Who was at the park 25 years ago when the aircraft was delivered? We are looking for local connections to our aircraft,” he said.

The township has held several fund-raisers for the project. “In addition to individual and corporate contributions, the township held several dine out events in spring of 2016 at local restaurants. We also partnered with Global Brew to host a Fall Fest in Township Park to benefit the project,” said Miles. “Because of these efforts, businesses and individuals have contributed nearly $20,000 to the project.”

The airplane renovation projects cap the recent improvements completed in the park.

“We recently added an all-season restroom facility and a dual personal electric vehicle charger, both powered by a 3-kwh solar panel; renovated an existing restroom for ADA compliance and plan to renovate the second existing restroom this fall; extended electrical service to all pavilions; resurfaced the tennis courts; and installed Wi-Fi throughout the park,” Miles said. “The restoration of the A7 is the capstone to the improvements we have made to the park.”

The Flight Deck Veterans Group has restored historic aircraft across the country including an F-14 Tomcat on display on the historic USS Yorktown in Charleston, S.C. and the Fast Eagle 102, the first F-14 Tomcat to shoot down another aircraft in combat, on display at the Commemorative Air Force’s High Sky Wing in Midland Texas. For more information about the Group, visit www.fdvg.org.