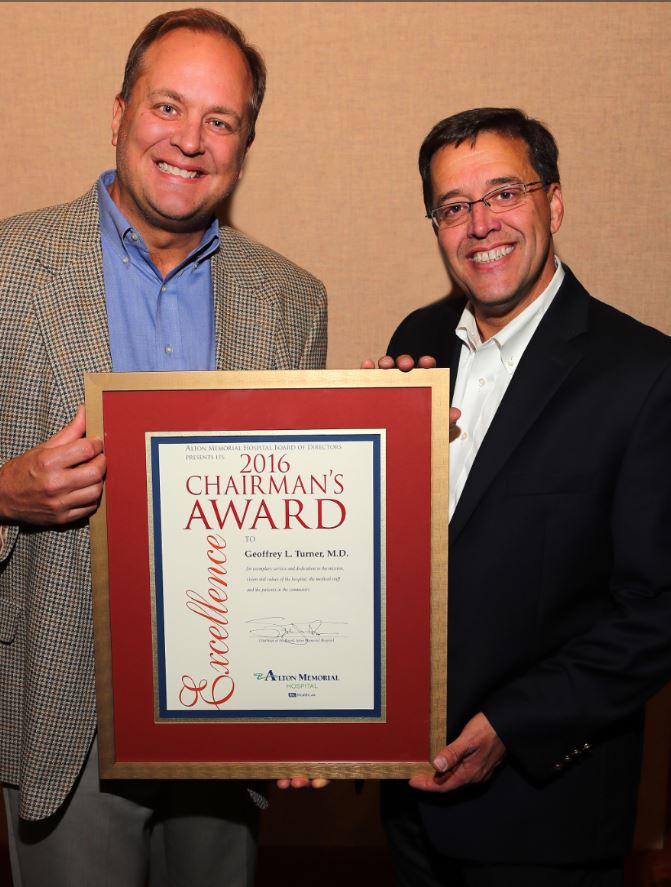 Turner, an OB/GYN on staff at AMH since 1998, received the award before friends and peers at the hospital’s annual Physician’s Appreciation Dinner on Oct. 7, held this year at the St. Louis Zoo.

“I am very honored and humbled to be included in the group of physicians who have won this award,” Dr. Turner said. “All of them have been true pillars of Alton’s medical community. A sincere thanks to all the nurses and hospital staff who work hard to make all of us physicians look good.”

He was nominated by AMH staff who called him knowledgeable, supportive, approachable and always willing to listen.

One nominee said he “has been known to deliver babies and see patients dressed as James Bond and Darth Vader.”

As to that last one, Turner has a very practical explanation.

“Giving birth can be quite a stressful experience,” he said. “If I can make someone relax or smile by showing up to their delivery in a silly outfit or by playing fun music in the OR for their C-section, then I am probably doing something right.”

Turner earned his medical degree at the University of Texas Medical School in Houston in 1994, and completed his OB/GYN residency at Duke University Medical Center in Durham, N.C. He practices at Southern Illinois Healthcare Foundation at the Alton Women’s Health Center. At AMH, he has been the department chief of OB/GYN since 2009, a member of the Medical Executive Committee since 2009, and was a member of the Cancer Committee from 2011-2015.

The Chairman’s Award publicly acknowledges a member of the AMH medical staff for the contributions the physician makes to the hospital and community, active participation in hospital and medical staff departmental affairs, and the promotion and practice of outstanding customer service with hospital patients and staff.

— Dr. Laura Hill, a pediatrician with Pediatric HealthCare Unlimited, received the Community Service/Humanitarian Award.
— Dr. Saad Bitar, a cardiologist with St. Louis Cardiology Consultants, received the Clinical Physician Award.
— Dr. Narine Sargsyan, a hospitalist, earned the Patient Service Excellence Award.
— Dr. Erik Stabell, internal medicine/Infection Control, earned the High Impact Teammate Award.
— Dr. Eric Guenther, a hospitalist, earned the Emerging Leader Award.
— Amy Hauch, CPNP with Pediatric HealthCare Unlimited, earned the Allied Health Professional Clinical Excellence Award.
— Dr. Mark Allendorph, a gastroenterologist who retired earlier this year, earned the Lifetime Achievement Award. This award recognizes a physician who has made AMH his or her primary hospital and throughout his or her professional career has made significant contributions to the community and to the growth and development of AMH.