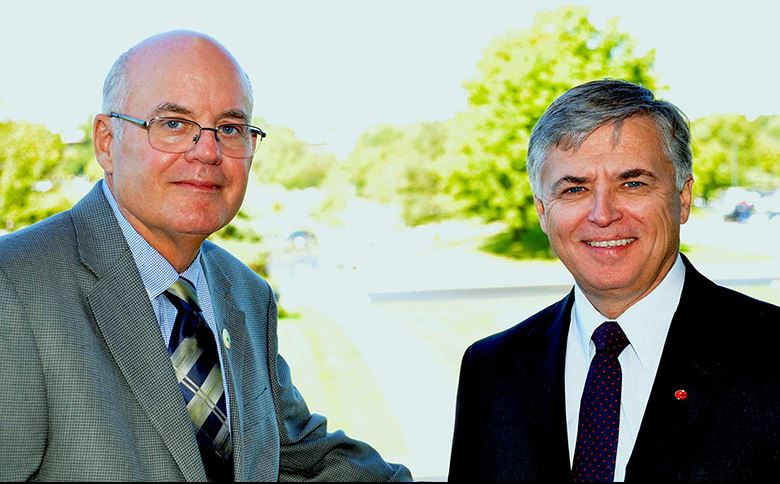 The task force will focus on three primary areas for collaboration:

• Functional operations that are campus centric and capitalize on partnerships between SIUE and the public/private sectors such as public works, public safety and opportunities for collaboration such as the City of Edwardsville’s management of the outdoor swimming pool for public use on SIUE’s campus
• Regional engagement that fits SIUE’s mission and addresses such needs as economic development, healthcare and work force development such as the current job training available at SIUE’s East St. Louis campus
• Student and faculty development that offers internships, consulting opportunities, alumni engagement and entrepreneurial development

Dunstan said that while SIUE is ranked as one of the top universities in the state and is nationally recognized, it is particularly important to Southwestern Illinois.

“SIUE has made a positive and significant impact on Southwestern Illinois and is the key economic engine for Madison County, but the University’s impact can be even greater,” Dunstan stated.
Pembrook said the SIUE Community/Task Force will build upon already established community relationships and areas of mutual cooperation between the University and the public/private sector.

“Most importantly, a strong relationship between the University and the public and private sectors presents a significant opportunity for our students to take their education beyond the classroom, to gain valuable experience and literally put into application the theories and practices they have learned,” Pembrook said.

Dunstan said he expects the SIUE/Community Task Force and, ultimately, the programmatic and intellectual resources available through SIUE, to be particularly beneficial as the county continues to expand its base as one of the key logistical areas in the country.

“Madison County is one of the premier intermodal distribution centers in the country, and continues to grow as we have recently witnessed with Amazon’s decision to locate two distribution facilities in the Gateway and Lakeview Commerce centers,” Dunstan said.

“SIUE’s expertise in engineering, business management and logistics could only benefit that effort.
“Through the establishment of the SIUE Community/Task Force, businesses and local governments will be able to tap into the expertise of SIUE’s talented faculty, administrators and students to not only improve their respective operations, but also to assist in the development of a viable workforce.”

“I fully expect the Task Force to be successful and the partnerships created to be mutually beneficial,” Pembrook added. “The success of this program will not only benefit the participants, but also will strengthen our goal of effectively preparing our students to become viable, contributing members of the region both while pursuing their education and upon their graduation.”