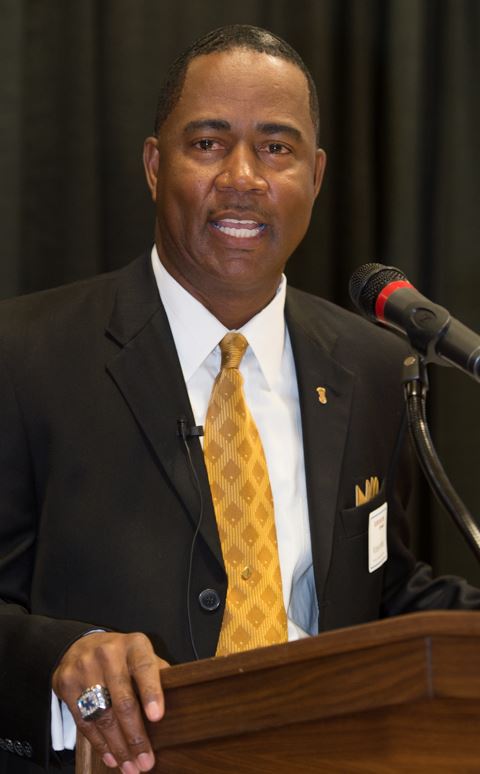 The event is designed as a networking opportunity for area business leaders allowing them to connect with key SIUE personnel and learn more ways to partner with the university.

As SIUE Day Chair, Dr. Robert Mock Jr., Charlotte campus president of Johnson Wales University in N.C., headlined the event. An Urbana native, he earned his bachelor’s in industrial engineering in 1990 from the SIUE School of Engineering.

“My time at SIUE and involvement with my fraternity, Alpha Phi Alpha, Inc., has shaped my belief that we can all be a catalyst of change even beyond our time on this earth,” Mock (left)  said.

Mock described his career success as “standing on the shoulders of others.”

After SIUE Chancellor Dr. Randy Pembrook welcomed the crowd and thanked them for their continued support. He also introduced the High Impact Community Engagement Practices (HICEPS) initiative, which connects the university’s faculty, staff and students with the community for the betterment of all.

· Installation of artificial turf for both the soccer field and softball infield at the Rec Plex, which has more than 700 reservations per year. It supports intramural and club sport programs as well as academic classes and youth sports organization rentals.

· Renovation of the Morris University Center, which is celebrating its 50th anniversary. Student enrollment has nearly doubled since the center was built, and now 300 student organizations vie for activity space. During an average year, the MUC hosts more than 5,600 meetings and events.

· Bringing the Leadershape (leadershape.org) program to campus. It is an independent, not-for-profit corporation whose vision is to create a just, caring and thriving world where all lead with integrity and a healthy disregard for the impossible.

· The Early Childhood Center has provided 15-20 scholarships for low-income student parents. Once supported by a state grant, the scholarship funding has been eliminated in the state of Illinois budget crisis and could use public support.

Walmart was the presenting sponsor along with the SIUE Foundation. Media sponsors included The Intelligencer, WSIE-FM 88.7 The Sound and the Illinois Business Journal.