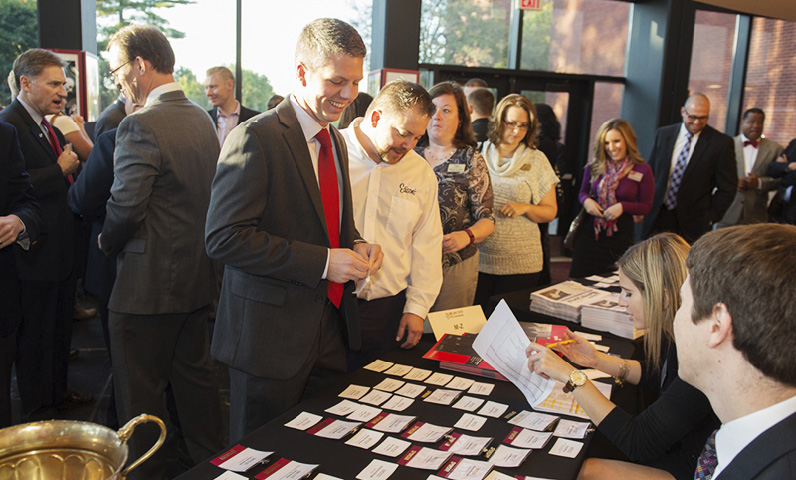 Dr. Randy Pembrook became the ninth chancellor in Southern Illinois University Edwardsville’s history on Aug. 1. The Metro East native returned to the campus where he had earned both bachelor’s and master’s degrees. He came to SIUE from Washburn University in Topeka, Kan.
“I am absolutely thrilled to be the chancellor of Southern Illinois University Edwardsville,” Pembrook said. “For me, it truly feels like coming home. I’m returning to my alma mater, which has grown significantly in national stature, as well as student enrollment.
The university has not only grown significantly since Pembrook graduated in 1980 — there were just 400 students living on campus then — it’s also jumped to the ranks of top colleges in the Midwest.
For the 13th consecutive year U.S. News & World Report has ranked SIUE among the best Regional Universities Midwest and among the top 15 public universities in that category. SIUE is also rated among the top Midwest Regionals for least amount of student debt upon graduation. The listing is in the magazine’s “Best Colleges of 2017” issue that was released last month.
SIUE was featured at number 63 in this year’s rankings of 163 Regional Universities Midwest. The university is 13th overall among public universities in that category. The U.S. News overall scores are based on the reputation of SIUE in higher education, graduation and retention rates, faculty resources, student selectivity, financial resources and alumni giving.
“SIUE is committed to developing leaders who shape a changing world by providing students with a high-quality, affordable education in a vibrant campus environment,” said Pembrook. “U.S. News recognizes the dedication, quality and success of our teacher-scholars and professional staff.”
SIUE enrollment continued its upward trend with its third largest enrollment (14,142) all-time for fall 2016. The Schools of Engineering (1,589), Nursing (1,371), and Education, Health and Human Behavior (1,298) all posted record undergraduate enrollments. Meanwhile, the School of Business reached its highest undergraduate enrollment since 2001, while the College of Arts and Sciences grew 1.5 percent. SIUE’s professional schools of Pharmacy and Dental Medicine each have capped enrollment capacity and have met or exceeded their enrollment goals for the fall.
“Approximately half of SIUE students are graduating with no loan debt while earning an average starting salary of $46,800 dollars per year,” said Scott Belobrajdic, associate vice chancellor for enrollment management.  “Average loan indebtedness for those with loans is about $20,000. More families and employers are understanding that all of our schools, and the College of Arts and Sciences, have the same exact national and international accreditations as private institutions charging $40,000-50,000 annually in tuition and fees. When they compare our accreditation, tuition and fees (approximately $10,700 annually), residential campus experience and starting salaries head-to-head, SIUE is an extremely attractive option.”
But Pembrook doesn’t intend to rest on those laurels. His first step has been to get reacquainted with the area, talking to students, teachers, K-12 school superintendents, business and civic leaders, etc. Then, he said, he wants to form a closer bond between the university and the private sector.
“One of the things I want to do is import a concept we called HICEPs at Washburn,” said Pembrook. “It stands for High Impact Community Engagement Practices. It’s based on a model where a community person expresses a need and you have faculty members who have expertise in that area. Then, you have students who are developing their skills. You try to bring those three groups together to address the overall issue. For example, the school of nursing at Washburn has a mobile clinic. It works with the hospitals to see where area people have health-care needs. Then students go out in the mobile center and practice their skills and help people who wouldn’t have access to that type of health care.
“I think each area can figure out something like that,” Pembrook added. “With the challenges we have in terms of higher ed funding, I think that connection with community is going to be vital to higher ed in the future. That idea of finding the connecting points between what a community needs and the expertise that a university has is something I’m going to be talking about over and over again.”
Pembrook said that going to college shouldn’t just be about learning to be a great accountant or engineer but to learning use your skills to help the community.
“SIUE’s mission closes with the concept of ‘shaping a changing world,’ he said. “Part of it is helping young people understand that the world is bigger than what they are imagining as it relates to their particular job. What are the challenges for a community and how can you plug into that? I think that’s a really fun part of higher education.”