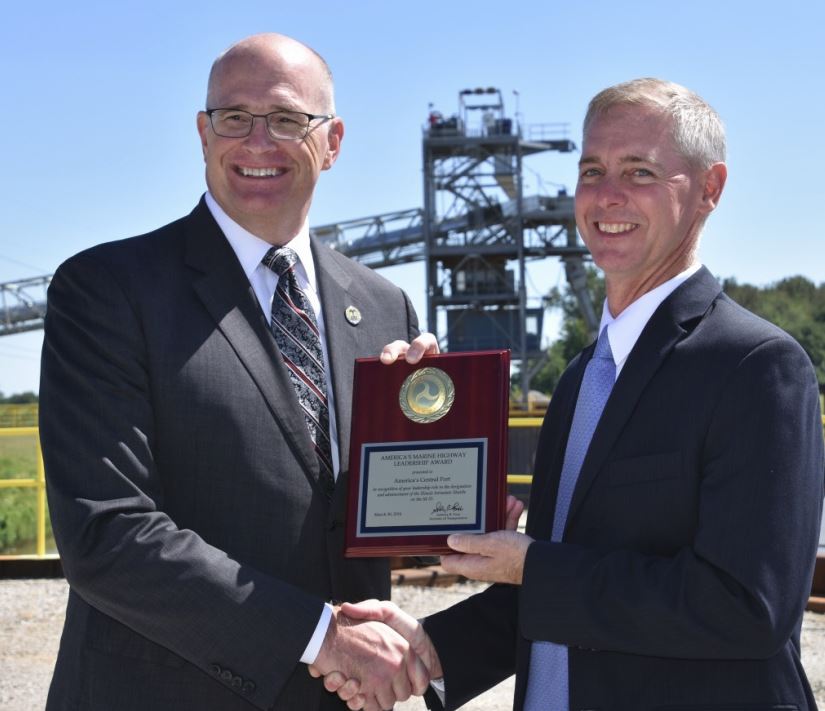 Both Jaenichen and Nadeau participated in the Administrators’ Roundtable on the Freight Economy held by Bi-State Development Agency Monday morning in downtown St. Louis.

While at the port, Jaenichen presented Dennis Wilmsmeyer, executive director at America’s Central Port, with a plaque to recognize the district for its Illinois Intrastate Shuttle Project Designation for the potential future movement of sea containers on river barges.

“The planning and investment in infrastructure by the Port District has been impressive,” said Administrator Jaenichen. “This river facility is like a field of dreams to those of us in the transportation industry. The design of this facility brings together the three major modes of freight transportation at a location that creates lock and ice free transportation, saving operators both time and money, and ultimately creating endless transportation opportunities for the region,” said Jaenichen.

“We are grateful for this award,” Wilmsmeyer said. “The Port District strongly believes in reinvestment in the infrastructure so that we as a region may continue to grow and thrive. ” The designation was in large part due to the work done by the Illinois Soybean Association for grain export to overseas markets in containers. The project designation makes the future container-on-barge opportunities at America’s Central Port eligible for federal funding.