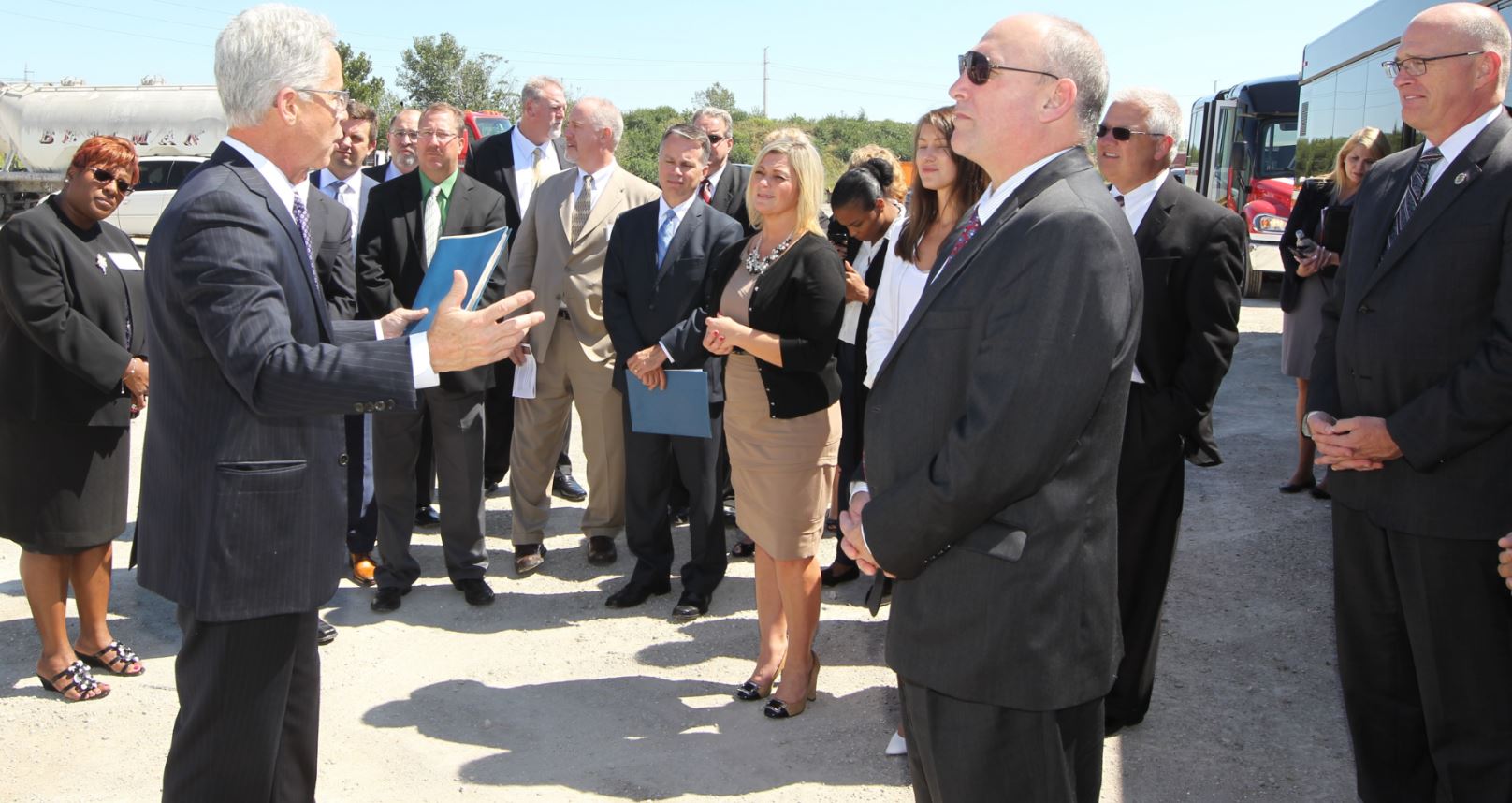 The discussion covered a range of freight-related topics, including the challenges and opportunities of a projected 45 percent growth in freight volume over the next 30 years, and how the region will direct infrastructure investments to make freight movement faster, safer and more efficient.

Nadeau leads the nation’s agency that oversees infrastructure funding. Since February, he has been traveling around the country conducting roundtable discussions to better understand the hurdles and barriers the freight industry currently is experiencing, and to better communicate the critical link between economic growth and investment in transportation. The event in St. Louis was his 24th roundtable discussion. He added St. Louis to his roundtable list after seeing firsthand a few months ago how St. Louis Regional Freightway is bringing together the St. Louis region. Nadeau was the keynote speaker at the April kickoff event for St. Louis Regional Freightway.

“It is fitting that our Beyond Traffic 2045 Roundtables on the Freight Economy culminate in a city that is both strategically located and enjoys a robust transportation network,” said Nadeau. “St. Louis was a gateway for the nation in the 19th century, and is poised to do so again for the freight community in the 21st – important to both national and international markets and representing a premier freight hub in our nation.”

Jaenichen also commented on the significance of the final roundtable and the fact that it had drawn such large numbers of participants, particularly from the private sector.

“This is how we make regional economies grow and how we create jobs,” Jaenichen said. “You guys get it. Your lessons learned here will be important to other parts of the country.”

BSD President and CEO John Nations went even further to highlight the broader impact that could come from the actual work underway to advance the region as a freight hub.

“The strategic opportunities that can be developed here in our region can benefit our entire nation,” Nations said.

There are challenges to be overcome in order to fully leverage the opportunities, and those challenges were the focus of much of the discussion during the roundtable. From the need for grade separations to help address bottlenecks that tie up freight, to the desire for investment in medium hub airports instead of just adding capacity at larger already crowded airports, to requests to revisit load restrictions for trucks on the federal highway system, participants engaged in robust conversation based on their first-hand experience in the freight industry. Funding reliability and workforce development needs were two common themes that came up repeatedly during the roundtable discussion.

After the roundtable event, Nadeau and Jaenichen joined other leaders who participated in the roundtable for a bus tour of regional freight assets. The bus tour provided the U.S. Department of Transportation a firsthand perspective of private industry transportation needs, and more importantly, the high economic rate of return with infrastructure investment in the St. Louis region.

Highlights on the special tour included a stop at the Lange-Stegmann Company (LSCO), located along the north riverfront, where Nadeau and the other tour participants got a look at one of the private businesses that are part of the North Riverfront Commerce Corridor. Lange-Stegmann Company, which is a service provider to the agricultural industry, has seen its operations grow dramatically over the past decade as it sold the original fertilizer supply business and became a transportation company. They went from handling 90 barges per year to 660; 300 rail cars to over 8,300 annually and 130,000 tons of product to over 1 million tons each year. Lange-Stegmann Director of Operations Richard Diffley told those visiting the facility, “We always knew the importance of utilizing the river, rail and highway infrastructure as a cost effective way of shipping product for LSCO and our customers, but we have truly realized its potential since our private investment expansion in 2008.” Additional infrastructure improvements in the area, especially rail grade separation, would help to facilitate continued growth by making the supply chain more efficient and a much safer for LSCO, the railroads and general public.

The second stop showcased the operations of the Terminal Rail Road Association (TRRA), which provides the St. Louis Municipal River Terminal with direct access to the regional switching carrier with service to the six North American Class I carriers. With the Merchants Rail Bridge in the background, TRRA President Mike McCarthy addressed the importance of that Mississippi River crossing, the sixth busiest Mississippi River rail bridge in the nation. The bridge is in need of replacement to increase freight speed and expand capacity. The $222 million project has been identified as a high priority project by St. Louis Regional Freightway.

The final tour destination was America’s Central Port (ACP) in Granite City, where Executive Director Dennis Wilmsmeyer gave a guided tour through the 1,200-acre site that is home to 1.9 million square feet of warehouse space, 70,000 square feet of office space and 150 apartments. ACP is also the site of the new $50 million Madison Harbor, built to increase handling capabilities of port operators to better accommodate the demands and needs of Midwest growers and shippers. The new harbor provides additional opportunities for multi-modal logistics and for the container on barge industry. During this stop on the tour, Administrator Jaenichen presented Wilmsmeyer with an “America’s Marine Highway Leadership Award” recognizing ACP for its leadership role in the designation and advancement of the Illinois Interstate Shuttle on the M-55.