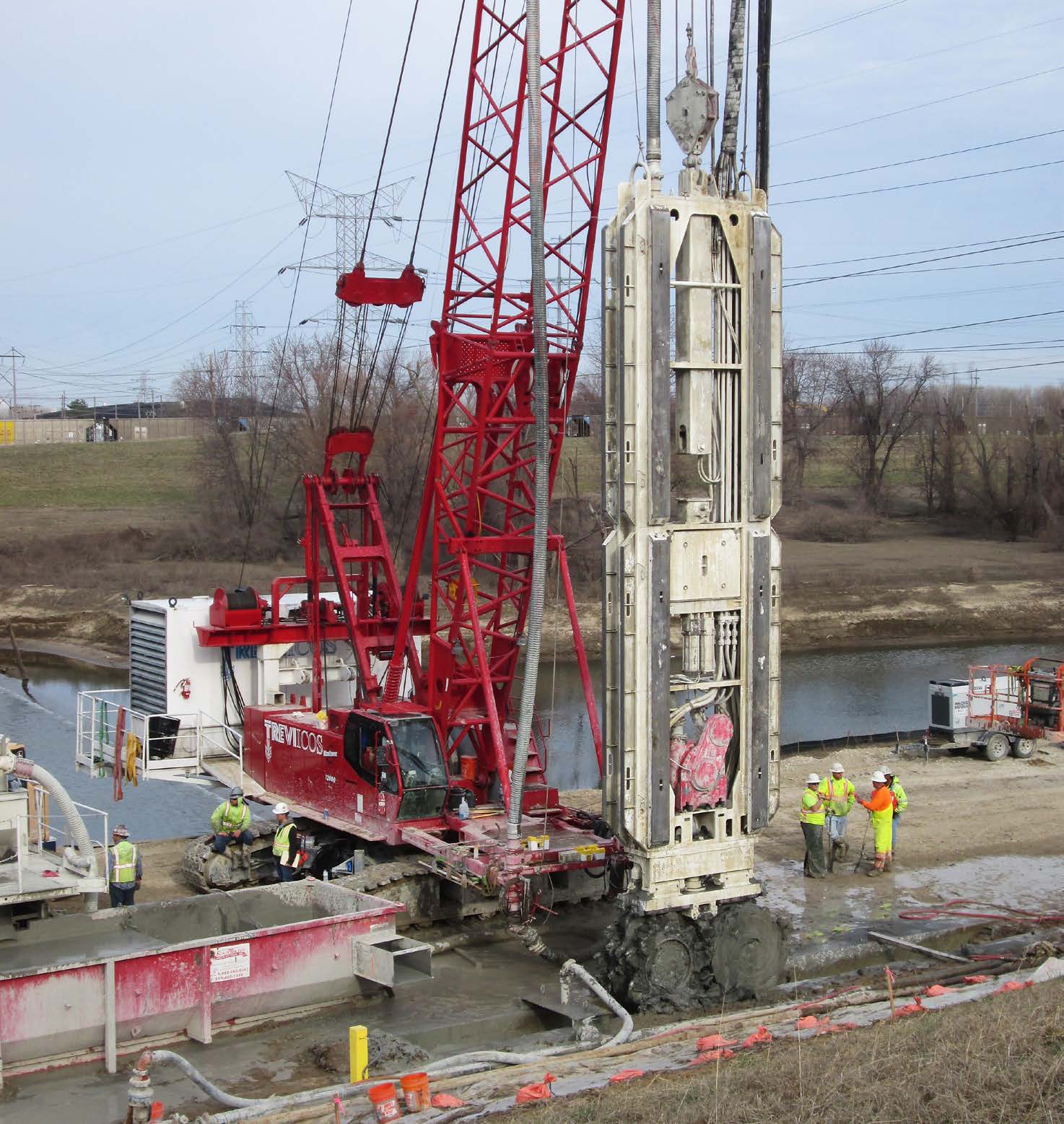 By ALAN J. ORTBALS
With work to rehabilitate the American Bottom levee system nearing completion, the Leadership Council Southwestern Illinois is getting ready to post the “Open for business” sign.
“We’re gearing up in a major way to market this entire area to certain industry sectors,” said Ronda Sauget, the Leadership Council’s executive director.  “The energy industry, the agricultural industry, logistics and freight are some of the areas we’ll be targeting. When you look at transportation infrastructure across the country, the American Bottom is one of the areas where you have availability of land and all modes of transportation coming together. We want to go out to the economic development and site selector communities and market this resource to help our companies expand and bring new companies here.”
High river levels have made for some slow going this year. There are six projects that are currently underway but it is hoped that all can still be completed by year end, according to chief supervisor of construction Chuck Etwert.
“High river levels have been a problem for three of our projects since the December/January flooding,” Etwert said. “The river hasn’t yet receded enough to lower the ground water elevation and allow for the installation of over nine million dollars of reinforced concrete pipe.”
The levees protect more than 155,000 people and 5,000 businesses from the waters of the Mississippi River. Etwert said that the council is well on its way to achieving accreditation in 2017, using only the revenue from the dedicated Flood Protection District sales tax. The project that began nine years ago when FEMA announced its intention to declare the entire American Bottom a “high hazard flood area” is being hailed as one of the largest and most successful projects in Southwestern Illinois in decades.

“I’ve lived and worked all over the state,” said Rich Conner, chairman of the Leadership Council’s Levee Issues Alliance committee. “I’ve never seen a more impressive response to a huge challenge. It really comes down to the local leadership and cooperation.”
Originally estimated to cost in excess of $180 million, the Metro East Flood Prevention District Council is on track to achieve the goal of reaching the 100-year FEMA accreditation level at less than $75 million.
But confusion regarding funding for the levee rehabilitation arose recently following a story by a local news outlet that inaccurately reported that more than $20 million in federal government funding was reprogrammed by the U.S. Army Corps of Engineers to a different project and might be lost.
Conner said that report was inaccurate. The funding has not been lost, he said, but will simply be appropriated in a different year for the multi-year project.
According to Etwert, in 2015 the Flood Prevention District Council asked the Corps of Engineers to use funds budgeted in that fiscal year for the repair of the levee adjacent to the Mel Price Lock and Dam in Alton that was damaged by the construction of the lock and dam. The Corps had already programmed the funds for other projects that are part of the overall $450 million levee rehabilitation project for the 74-mile levee system that protects Southwestern Illinois.
The Corps, citing a bureaucratic regulation that kept it from spending funds earmarked for one section of the levee system on a different section, chose to transfer the funds to projects outside of the region rather than apply the funds toward repairing the levee adjacent to the lock and dam.
“A congressional legislative fix to the regulation is being pursued,” Etwert said.
“Repairs on the levee at the lock and dam, estimated at $30 million, are entirely the responsibility of the Corps of Engineers,” he said.  “It is the weak link in our 74-mile levee system and is not at 100-year flood protection levels.
“On numerous occasions,” added Etwert, “members of the Flood Prevention District Council spoke with Corps of Engineers officials and asked them to utilize their funds to correct the levee issue at the Mel Price Lock and Dam, a problem created by the Corps. In 2009, the levee at the lock and dam was identified by the Corps as an emergency area that requires an interim operation plan of flood fighting with an estimated cost of $1 million each time the river rises above flood stage.”
Etwert said the reprogramming of the funds by the federal government has not caused a delay in the project and the Flood Prevention District Council is completing the same levee rehabilitation projects targeted by the Corps of Engineers with local funds generated by a quarter-cent sales tax in place in Madison, Monroe and St. Clair counties.
Local funds were used to pay for the 100-year rehabilitation and will match federal funds for the 500-year construction work.
Local funds spent on the project will be credited toward the 35 percent federal match.  “We have an agreement with the Corps of Engineers on how to move forward with rehabilitating the levees to the 500-year flood level using local funds.  The money spent will count toward the federal match requirement, so no funds will be lost,” Etwert said.
“Congress has authorized rehabilitating the levees to a 500-year protection level, and the federal government has committed to providing 65 percent of the funding for that portion of the project,” Etwert said.
To that end, the council issued additional sales tax revenue bonds that will generate an additional $77.5 million for the 500-Year Authorized Level of Protection Projects.
“It is the intent to use these funds to build the most cost effective and highest priority flood protection projects throughout the counties of Madison, Monroe, and St. Clair, Illinois,” Etwert said.
Because the Corps is responsible for 100 percent of the Mel Price Lock and Dam Levee deficiency and 65 percent of the other project costs, these funds are obligated to be appropriated to the project in future years.
“We have the full support of our congressional delegation and are confident the federal funds will continue to be appropriated to the project,” Etwert said. “There will not be a loss of revenue to the region or to this project.”
Ron Motil, president of the Southwestern Illinois Flood Prevention District Council, said there were a number of issues that had to be addressed with the Corps of Engineers for the 500-year project to proceed, including the use of local workers on the project.
The majority of the funding to rehabilitate the levees comes from a 0.25 cent sales tax which was approved by the three counties which comprise the Flood Prevention District Council.
“Madison County Chairman Alan Dunstan was adamant that since local tax dollars were funding the project, local workers should get the jobs, not out-of-state workers brought in by contractors,” Motil said.  “Chairman Dunstan said this was a promise local leaders made to taxpayers when it proposed the sales tax. The Flood Prevention District Council Board agreed with the chairman, and that has been our formal position since the project began in 2012.”
At the center of the issue is the Corps of Engineers’ interpretation of federal procurement regulations that the corps claims prohibit it from mandating project labor agreements.  Dunstan, however, said a Presidential Executive Order permits such agreements and studies show they add value to the project in terms of worker productivity and safety.
Importantly, the Flood Prevention District Council and the Corps of Engineers have resolved the issue.  The Corps of Engineers has approved a Best Value Tradeoff Approach procurement method and will evaluate the use of project labor agreements on a case-by-case basis.
Motil said the actions of area officials to initiate the levees rehabilitation averted a crisis that would have negatively impacted the entire region.
“Not only would decertification of the levees impact our area’s economy but, if the levees were not repaired, it could have put thousands of residents in danger,” he said.