By DENNIS GRUBAUGH
HIGHLAND — It’s 10 a.m. on a weekday, and the halls of San Gabriel Memory Care are amazingly quiet. Many of the residents are resting comfortably in their rooms.
Within the hour, though, things begin to stir as staff prepares for lunch. One by one, the residents begin to appear, many walking under their own power. Others are helped along by a walker or an outstretched, friendly arm. Niceties are exchanged as residents spot familiar faces.
Familiarity is a welcome commodity in this specialized world of senior living. 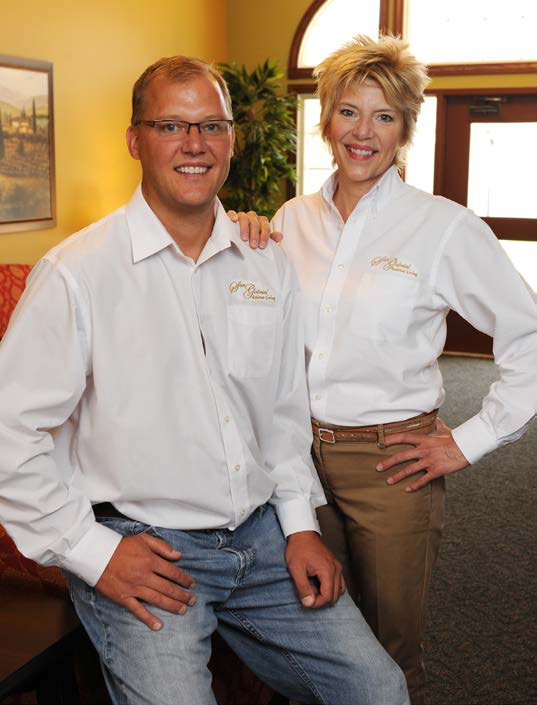 “We have a very nice, quiet feel,” co-owner Carrie Dietzen said. “It’s very helpful to this population.”
Memory care is a growing concern for an aging society, and businesses throughout Metro East are rapidly moving to address it. The field encompasses a wide variety of dementia and Alzheimer’s patients.
San Gabriel, at 2509 Frank Watson Parkway in Highland, is a 34-unit building, comprised of two, mirror-image wings, each housing 17 apartment-like dwellings. San Gabriel in Highland is only a year old, but already owners Carrie and John Dietzen are hard at work on a second facility, a $3 million operation to be located in Glen Carbon.
Ground was broken for the newest facility in August. It will be located just off Illinois Route 157, just north of the Meridian Village retirement community. It will be the first development on a 9-acre plot along Auerbach and Magnolia Place.

There is no question of the need for such facilities, she said.
“The estimated number of older adults who are going to have some form of dementia increases exponentially in the future,” Carrie said.
The Dietzens, a brother and sister team, invited a reporter to visit the Highland facility to get an idea of what the Glen Carbon structure will look like when it’s complete in about a year. It features modern furnishings, upscale décor, tall ceilings, secured entries, and kitchen, dining, activity, and TV viewing areas. Outside each 350-square-foot room is shelving called memory boxes, for personal mementos and pictures.
A continuous, circular hallway threads through each wing. The corridor design keeps residents from facing a dead-end hall, which can be upsetting to them.
San Gabriel accommodates married couples, meaning the potential for many more than 34 residents on site, Carrie Dietzen said.
She got her start in the assisted living business in the year 2000 with another brother, Mike, who owned the Brookstone Estates operation in Effingham. She worked for him a few years before he sold the operation and moved on.
From there, Carrie and John, who come from a family of 10 children, studied the terrain to see where they could start their own assisted living business. They saw a gap in Ogle County and opened a business in Rochelle, called San Gabriel Assisted Living, in 2011.
“I knew the business, and John is the finance, entrepreneur and builder, so we made a good team,” she said.
The first location was well underway when the siblings decided to look at a niche that remained unserved.
“We had a lot of experience with memory-impaired residents, but they were higher functioning. We saw a great need for memory care, and Highland happened to be a good market,” Carrie Dietzen said. “We had actually looked at Highland for assisted living about 15 years ago.”
The Highland facility was opened in May 2015, after being built from the ground up, with John Dietzen serving as general contractor.
“We designed it ourselves. We did research on facilities in St. Louis and Metro East and picked the best of the best,” Carrie said.
John added: “We also went to North Carolina. They had a couple of phenomenal facilities there.”
The 20,500-square-foot facility sits on a 4-acre tract, with most of that an unobstructed view that residents can enjoy from an enclosed patio.
The overall design incorporates much natural sunlight.
“One form of the disease is called ‘Sundowner’s Syndrome.’ The more sunlight they get during the day, the less agitated they are during the night,” he said.
The name San Gabriel comes from the Archangel Gabriel, who is said to have trumpeted hope when he proclaimed the conception of Jesus.
“He said with God all things are possible. We feel that’s a very hopeful message for family members who are watching their loved ones go through this,” she said.
John Dietzen acknowledged the memory care industry is a competitive one.
“But our model is a little bit unique. Most memory care buildings are being built larger and larger, for financial reasons, but we like the smaller, more personal approach,” he said. 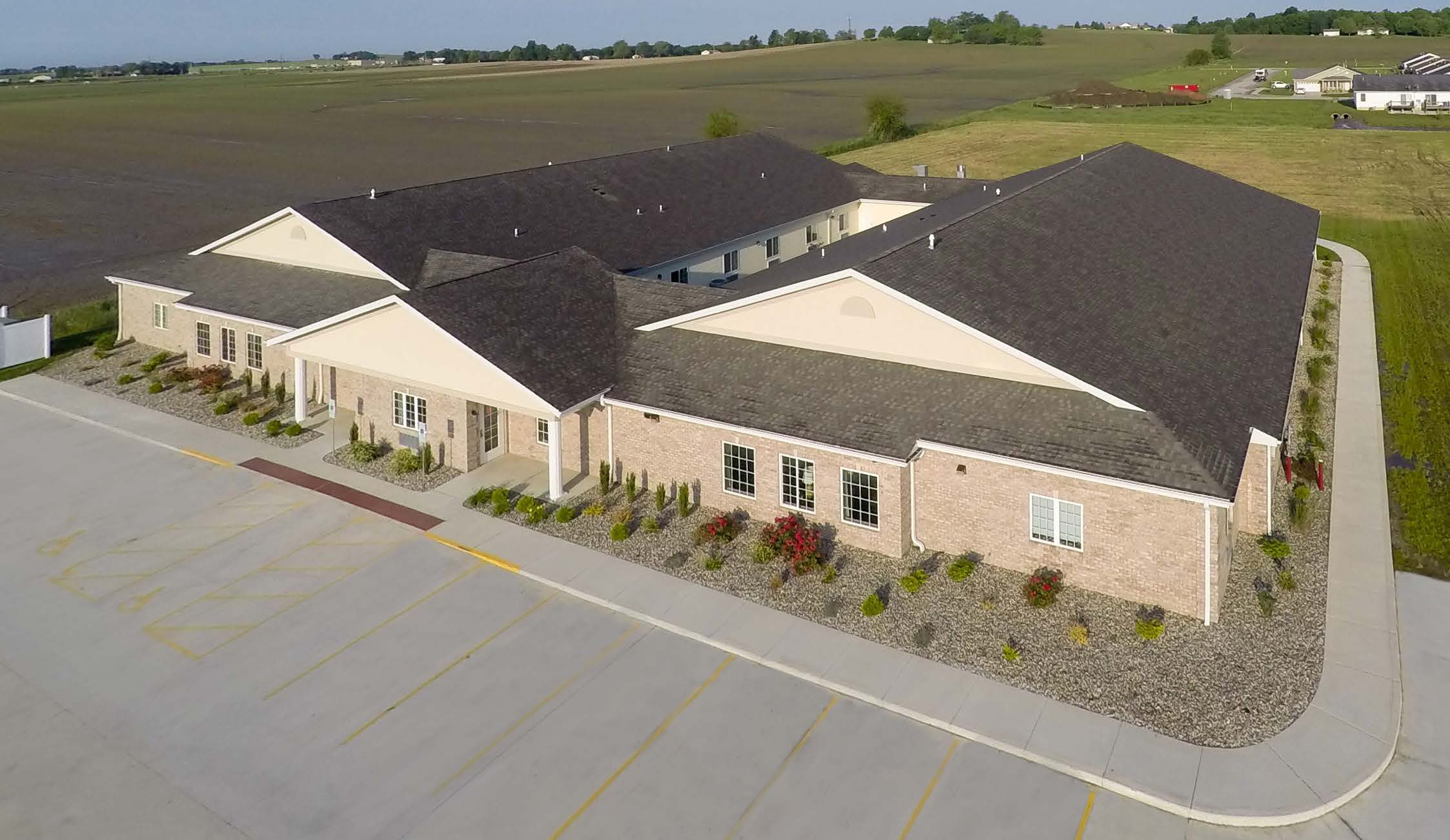 Bigger assisted living operations are often focused on a continuum of care, targeting the entire aging process from simple retirement to end of days.
San Gabriel gets referrals from a variety of sources, doctors, churches and others.
“When someone needs memory care, they need it immediately,” Carrie said.
While they declined to discuss rates, John Dietzen said the single price quoted to the family includes every service they offer. Some residents need a more critical level of care than others, which factors in.
Long-term care insurance is one way residents pay for nursing home, in-home, assisted living and memory care, she said. “That helps make it affordable for families.”
A variety of CNAs, nurses, medical assistants and resident assistants are involved, about 35 on the payroll in all.
Staff cares for the residents by literally giving them showers, helping them dress, taking their hearing aids 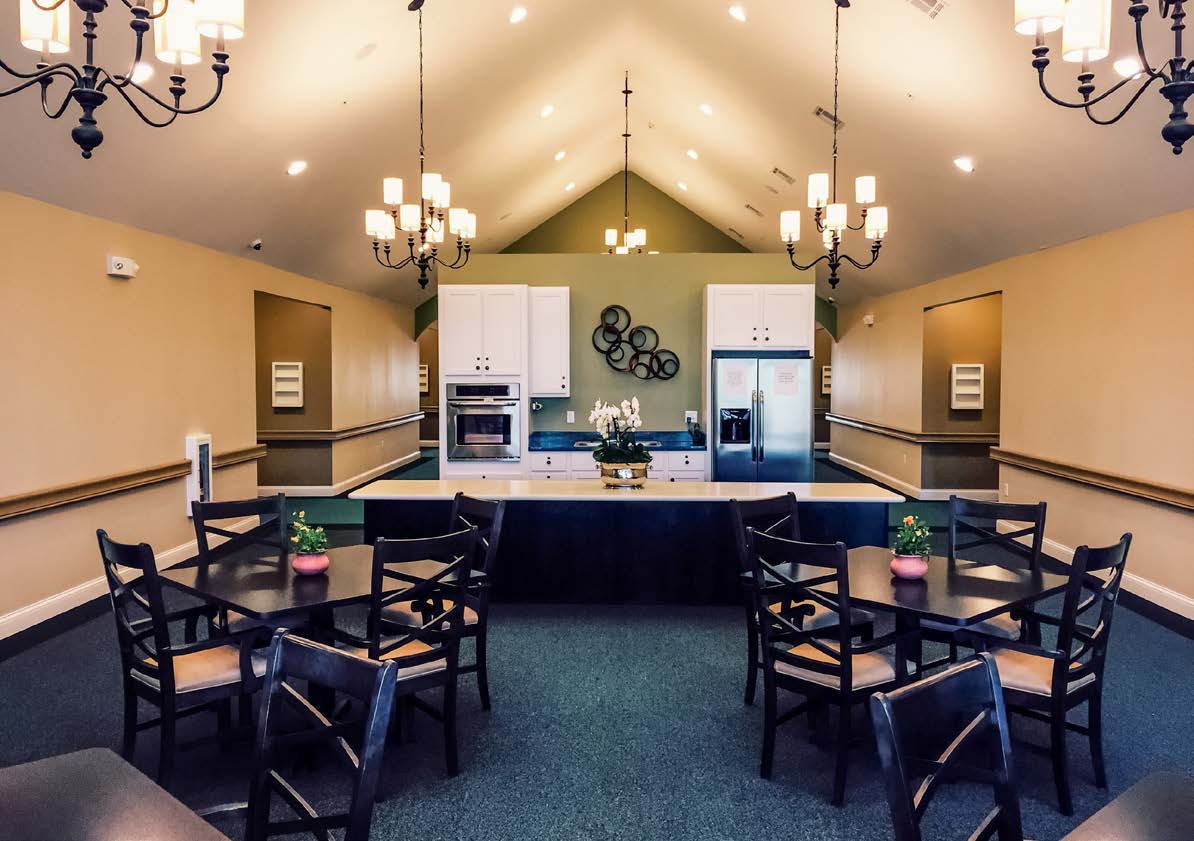 out at night and putting them back in the morning, brushing their teeth, grooming and combing hair.
It is a “cruel irony,” she said, that so many of the residents are physically capable of things that their minds won’t let them do. That makes hiring the right people so important.
“It takes a very, very special person who has an extreme amount of patience and compassion,” Carrie Dietzen said. “We hire the heart, because we know we can train the head and hands.”
Nurses will provide medications prescribed by the residents’ doctors and they will accompany residents to appointments and stay with them during the process. A doctor also routinely visits the home and many families opt to use him as their primary provider because it cuts down on trips out of the building, which can be disruptive.
“In addition we provide for their mental stimulation,” Carrie said. “We have activities all day long, geared toward the level of each individual. We have one couple who only wants to watch TV. We have others who only want to read. We had one gentleman who recently passed away who was a teacher, and he loved to read out loud to the other residents. They loved it.”
Exercise and activities stimulate the blood, and therefore the brain, so staff employs recreation or out-of-the-box thinking where possible.
“We do laundry for all the residents,” John said. “Sometimes we’ll encourage one of them to help do folding. It’s an activity to keep them stimulated.”
In the kitchen, sometimes residents will bake cookies while supervised.
“We care for their spirit as well,” Carrie said. “We have different churches come in for services. And we encourage family members to come and visit because it helps maintain those ties. We care for the whole person, physical, mental and spiritual.”
Part of that care is a tender balance of the routine with some structure.
“Even though we serve breakfast at 8, lunch at noon and supper at 5, we don’t force people to eat then. We allow people to live the routine they had at home. Structure is a very important thing for memory-impaired individuals, however, you do have to allow for their personal idiosyncrasies. As John, says, “Be flexible.”
For information on the new San Gabriel facilities, email sangabrielmc2015@gmail.com