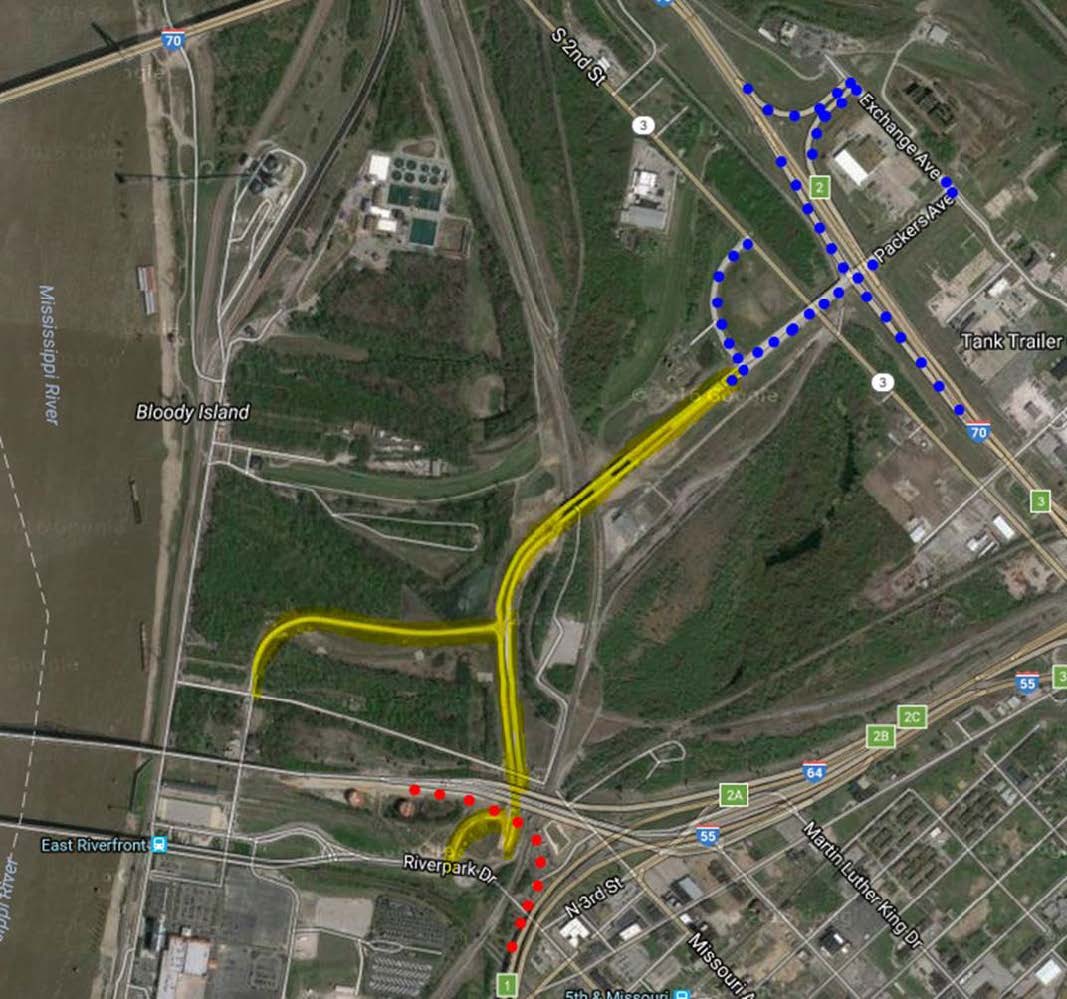 By DENNIS GRUBAUGH
An interweaving pair of road and bridge projects is coming into the homestretch near the East St. Louis riverfront, which will delight drivers who have been challenged in recent months navigating their way into Illinois.
The Illinois Department of Transportation says it’s pleased with the progress on a connector ramp being built onto the Martin Luther King Bridge, which will replace some of the access lost when a Poplar Street Bridge ramp into Illinois was removed in 2013 for the expansion of the Poplar Street Bridge on the Missouri side.
And, progress is also moving smoothly on the first phase of relocating Illinois Route 3 as it comes from the Stan Musial Veterans Memorial Bridge into Illinois. That project should be done by this fall.
IDOT suspects that the new rabbit-warren combination of roadways will eventually allow drivers coming off the Eads and King Bridges to have better access to reach Route 3 and Interstates 70 and 64, in all directions.

Regarding the $27.7 million MLK Connector Ramp, IDOT District 8 Program Development Engineer Kirk Brown said his department has been responsible for Phase 1 and 2
preliminary engineering phases of the ramp, which entailed design and environmental studies before a developed plan was handed it off for Phase 3, the construction.
“This is a bridge to primarily restore a direct connection to Route 3 from the Poplar Street Bridge. It was necessitated because of Missouri’s work being done on the Poplar Street Bridge since 2013,” Brown said. 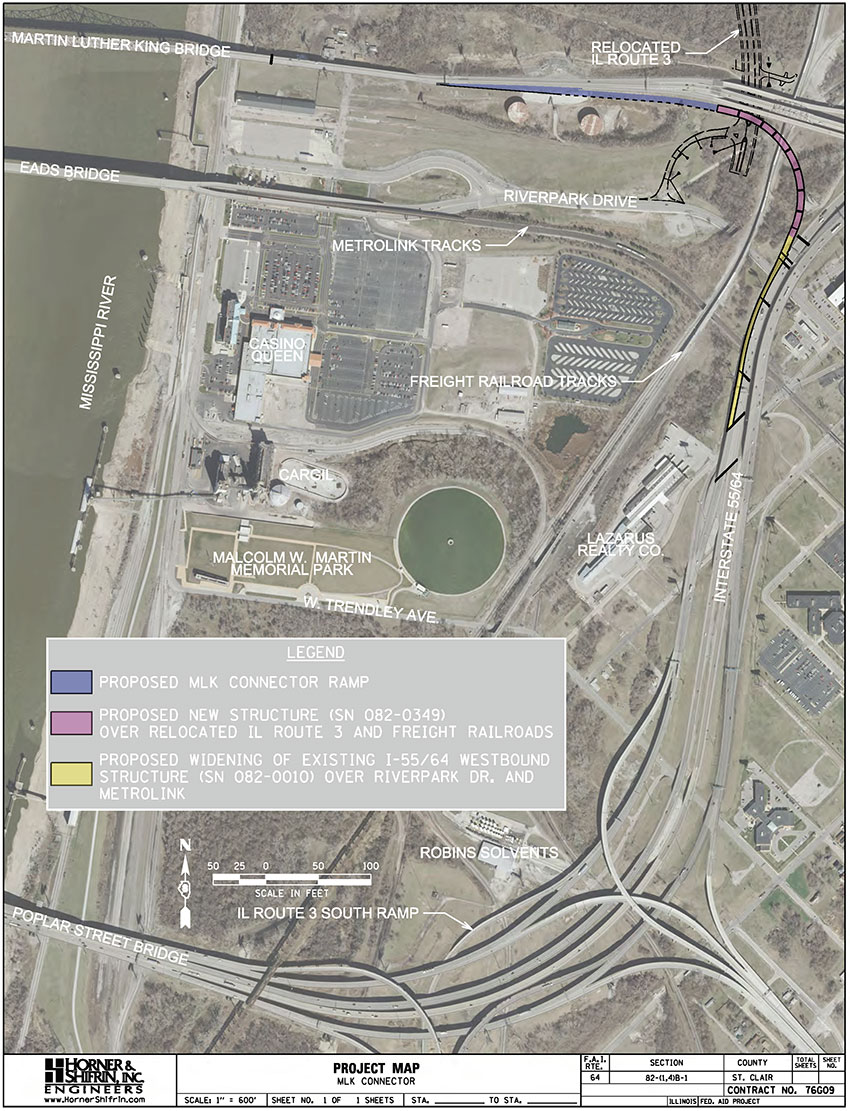 Missouri removed a ramp from westbound 44 onto the Poplar Street Bridge.
“Once that ramp was removed we lost that direct connection to southbound 3,” he said. To restore that connectivity, the state is building a connector ramp at the east end of the King Bridge. Drivers will be able to use that to head back south, where they can access westbound Interstate 64 (across the Poplar), or southbound Route 3, toward Sauget, in Illinois.
“Essentially drivers, instead of having to take local routes or find a different way through East St. Louis, will be able to come off the King Bridge, essentially make a big right turn and still get lined up again, to get back on 3,” Brown said.
Traffic studies show that by the year 2035, IDOT expects some 5,000 vehicles a day to use the route.  IDOT uses a 20-year design to interpret traffic trends, Brown said.
The project should be done by spring 2017, said Ted Nemsky, director of construction for IDOT District 8.
“We’re about 67 percent complete. All the piers and substructure are done. We’ve set all the structural steel — the girders — and they are forming on the concrete deck at this point.

Even as the King connector ramp is being done, IDOT is also hard at work on a separate project, to relocate a stretch of Illinois Route 3 at the eastern egress from the Stan Musial Veterans Memorial Bridge. It is a multiphase project that so far ends in various stubs, with one of those stubs being a ramp that ends at Riverpark Drive, just east of the Casino Queen entrance.
During the next several years, IDOT hopes to extend that new connection further south, but for now, when it opens it will primarily serve drivers coming off the Eads Bridge into Illinois (near the casino). Drivers will motor a few hundred feet and reach an access road that will allow them to eventually get back on Route 3, going north.
Now, drivers coming off the Eads have to snake through East St. Louis to reconnect with Route 3, much further east.
Nemsky said the Relocated 3 projects could be done by this fall.
“We’re in excess of 90 percent complete right now,” he said. “Realistically, it could be done in October.”
Coming east from the new Stan Musial bridge, carrying Interstate 70, there is an interchange with present Route 3. The new project will connect at that point and carry Route 3 down to Riverpark Drive. From there it is intended to go on to Sauget, but funding is not yet in place for that project. The road would be elevated as it crosses Riverpark. For now there will just be the stubbed exit onto Riverpark Drive, with a stop sign in place.
“There is also a ramp that will go (from the new leg of 3) to Missouri Avenue but that is still unpaved,” Nemsky said.
Keeley & Sons of East St. Louis handled the bid for the King connector ramp.
IDOT, however, awarded three construction contracts to build relocated Illinois 3 between St. Clair Avenue and Riverpark Drive totaling $23.8 million.  The prime contractors were Keeley & Sons for one contract and Baxmeyer Construction of Waterloo for the other two.
Meanwhile, the work being done on the Poplar Street is continuing long term and is being handled by the Missouri Department of Transportation. The next phase will feature a widening of the bridge. Both states share the cost of the work.