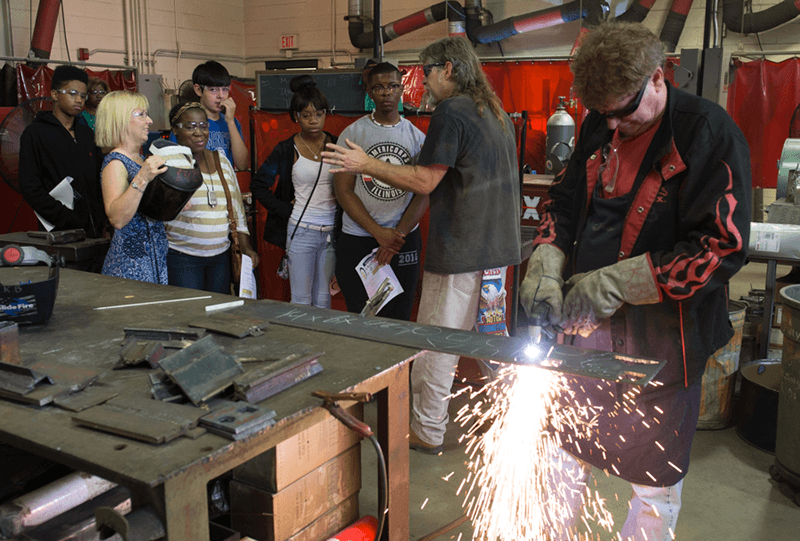 By DENNIS GRUBAUGH
EAST ST. LOUIS — A day set aside last month to educate young students about local careers of the future drew the notice of a good number of their parents, too.
The SIUE East St. Louis Center played host to a Manufacturing/Craft Day Experience for youths up to 18. The theme of “Manufacture Your Future/Craft Your Future – A Career that Pays in Southwestern Illinois” was an attention-getter.
“The center works with a lot of parents. When the notes went out with children to tell what they were going to be doing, parents were calling wanting us to work with them, too. We will work with them,” said Ronda Sauget, executive director of Leadership Council Southwestern Illinois, one of many partners in the campaign launched last year to fill trades and manufacturing positions. Some 1,500 jobs are expected to come open during the next five years in Southwestern Illinois.
While last month’s event was aimed at spreading the word among students, the fact that their parents showed so much interest is indicative that the campaign is working — and necessary, Sauget said.
“I think we’re addressing a real need — not only workforce shortage needs with the manufacturers and the construction trades, but also connecting them with people who need good careers,” she said.
This fall, the year-old program is being stepped up with the return of school.
“We’re rolling it out in a much bigger way,” Sauget told the Illinois Business Journal. “You’ll see us go to schools and have activities. We’re reaching out to all the community groups to bring awareness to these critical (jobs) areas, the ones that are certainly going pay well and that we just don’t have enough people to fill.”
Every school system in the Madison-St. Clair county area is being targeted.
Next up in the campaign is a plan to develop a mentoring program with companies that would give students direct links to companies “so they can talk to people in the field, and we can come back for other events. It’s going to be much more of an ongoing activity,” she said.
The idea is to expose young people to their future careers, allowing students “to come out and see what real people do in their jobs every day,” Sauget said.
Steering students to the right resources helps ensure their success, according to Southern Illinois University Edwardsville East St. Louis Center Executive Director Jesse Dixon.
“Today is the first step in bringing all the partners together for the purpose of raising awareness and hopefully inspiring youth and adults to go into these careers, which will benefit them, their families, our communities and the region,” Dixon said in a statement released in conjunction with last month’s event.
At that event, the center also partnered with the Mid America Workforce Investment Board, Southern Illinois Construction Advancement Program, Southern Illinois Builders Association, and Scott Air Force Base 375th Communications Group to provide a morning of various interactive events including reading about construction careers to SIUE Head Start/Early Head Start children and engaging SIUE Project Success and Upward Bound students with informational booths and classroom discussions about manufacturing. The morning included an on-site viewing of an Ameren utility truck and St. Clair County utility trucks.
Manufacturing jobs in Madison and St. Clair counties offer average earnings that top $80,000 a year, well above the national average, said Don Vichitvongsa, general manager of SunCoke Energy in Granite City.
“Careers in the trades also come with a high wage, averaging almost $33 per hour plus benefits of $22 per hour for a total of $55 an hour,” he said.
“The top 50 manufacturers in Southwestern Illinois account for approximately 16,000 jobs, while smaller manufacturers employ many more,” Vichitvongsa said in a statement.
Thousands of anticipated retirements will create the openings, and those gaps will be hard to fill unless more people consider manufacturing and trades.
“Many of the available jobs can be obtained with a high school diploma or equivalent, along with on-the-job training, while others require various certifications that can be earned in two years or less,” he said.
The Manufacturing/Craft Day Experience presented students with a different “menu of career options,” said Col. Terrence Adams, commander of the 375th Communications Group at Scott Air Force Base.
“A lot of kids don’t know what’s on the menu as it relates to jobs,” stated Adams, who is an Upward Bound alumnus from Tuskegee University. “We are providing them with information that they may not normally know about and let them pick careers according to their appetites.
“I didn’t know that the Air Force had so many jobs that you could work in,” Thomas DeWalt, SIUE Upward Bound student from Cahokia High School, said at the event. “I’m going to look into it.”