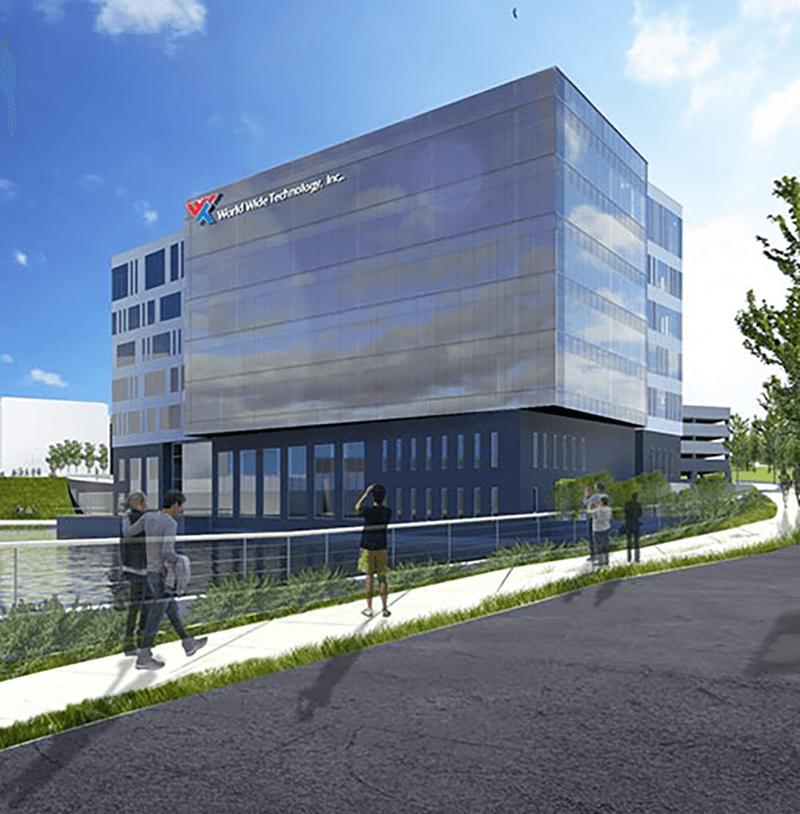 By ALAN J. ORTBALS
Ground was broken last December on the $65 million, 210,000-square-foot new headquarters of World Wide Technologies at Westport Plaza in St. Louis. But, before they could put a shovel in the ground, engineers at Geotechnology, Inc. had to analyze the site and design the foundation, some of which extended out into the existing storm water retention pond.
On land, conventional boring methods were used to locate the bedrock. To take readings beneath the lake, however, Frank Callanan, vice president of professional services for Geotechology, said they ran geophysics seismic refraction lines across the water, which sent shock waves down into the ground. The reverberations revealed the depth of rock underneath the lake.
That’s important because the building as well as the accompanying 763-car parking garage, is being constructed on 72-inch concrete piers sunk down to the bedrock 50 feet below ground.
The six-story building will feature a unitized curtain wall with structurally glazed ceramic tile on the lower levels. When finished, the headquarters will appear to rise out of the lake — which was drained and will later be refilled – with an exterior private patio on the north side overlooking the water.
Under the supervision of senior staff engineer Mett Melly, Geotechnology engineers provide construction quality control, inspecting every element from the concrete piers to the structural steel.
The project is slated for completion by April 2017. The headquarters will house up to 1,000 World Wide Technology employees.