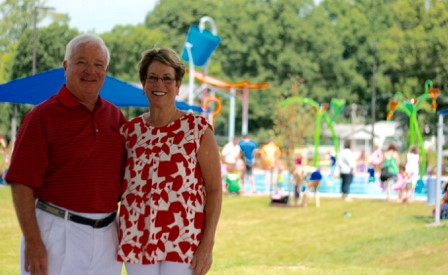 EDWARDSVILLE – Residents Gordon and Holly Broom have pledged a donation of $50,000 to help fund the construction of the family pavilion at the new Leon Corlew Park.

The Brooms have lived in Edwardsville since 1971 and have been longtime supporters of various local organizations. Gordon Broom is a senior partner at Hepler Broom, LLC.

“Holly and I are delighted to make a contribution to help build the Leon Corlew Park. We are especially pleased that the city has chosen to name this park after Leon Corlew. Several years ago Mr. and Mrs. Corlew made a major gift to the city for the purpose of providing recreational opportunities to Edwardsville’s citizens. The city leaders remembered and have now appropriately and permanently honored that gift,” Broom said.

Edwardsville has a “rich history” of citizens who have given back to the city, he said.

“We believe it is our turn to step up and do our part. The city has been blessed with not only many public spirited citizens, but with solid leadership at the City Council level and by past leaders like Mayor Gary Niebur and former City Administrator Ben Dickmann. These are the people whose stewardship has enabled Edwardsville to become the jewel that it is. We are happy to help Mayor Hal Patton and the current city’s leadership achieve their objective of improving the recreational facilities of Edwardsville. As grandparents, we look forward to bringing our grandchildren to this park and to having a picnic lunch in the Family Pavilion. Having witnessed the number of children, parents and grandparents who are already enjoying this facility, there is no doubt this park is a wonderful addition to Edwardsville. We join the community in congratulating Mayor Patton for his vision and the city for making this park a reality,” Broom said

The Leon Corlew Park offers visitors a splash pad and playground at the intersection of South Main and Schwarz Street. It also includes a walking/fitness track, shade structures, pavilions and restrooms/changing rooms.

“We are so grateful to the Broom’s for their contribution to the Leon Corlew Park. The park has been overwhelming successful since opening on July 8 and we have seen countless numbers of happy faces on youngsters and parents alike,” said Bob Pfeiffer, director of Edwardsville Parks and Recreation. “It’s been really wonderful to see this project take shape and add to the summer fun of so many families.“

Leon Corlew Park is one of the three parks included in the city of Edwardsville’s fund-raising effort – A Better Place to Play. The campaign is aimed at raising funds for three new parks in Edwardsville. The other two parks in development include a Sports Park for baseball, softball, soccer, pickleball, tennis and more near the I-55 corridor and an Ice Rink & Teen Center to be located on District 7 grounds off of Governors’ Parkway and. Sponsorship and donations are also needed to help fund these parks so construction can begin.

The Metro East Parks and Recreation District provided a $300,000 grant to help fund the Leon Corlew Park and two additional Madison County Park Enhancement Program (PEP) grants totaling $266,310 were also received to fund the walking trail and spray features. A $400,000 Illinois Department of Natural Resources Open Space Lands Acquisition and Development grant was also awarded but is on hold due to the State of Illinois budget impasse.

Other sponsors of the Leon Corlew Park, include: Edwardsville Rotary Club ($30,000); Junior Service Club of Edwardsville/Glen Carbon ($40,000), First Clover Leaf Bank ($10,000) and Global Brew Tap House ($8,000). Metro East Parks and Recreation District awarded an additional $300,000 for land acquisition for the new Sports Park, which will be the next park to be developed as part of the “A Better Place to Play Campaign.”

For more information about sponsorship opportunities for the Leon Corlew Park visit http://www.betterplacetoplay.com or call Katie Grable at (618) 692-7538.