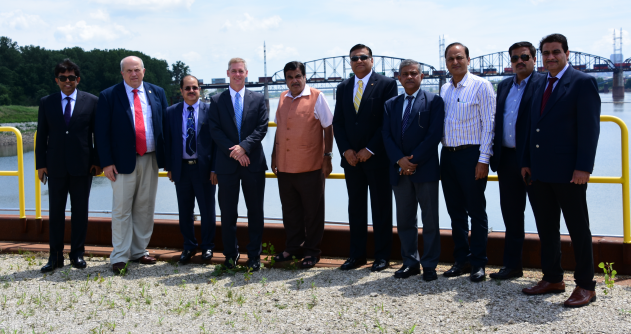 GRANITE CITY – India dignitaries visited the America’s Central Port this past week to better understand the importance of waterway transportation in America.

The minister is an equivalent position to the U.S. transportation secretary.

The visit from the minister and his staff and advisors was part of a tour of U.S. maritime facilities in order to understand the infrastructure, capacities, and importance of waterway transportation in the United States. In 2015, highway fatalities in India were four times higher than in the United States. The officials are looking at roadway design, intelligent transportation systems, enforcement of no cell phone usage and creative ways to shift freight movement to other modes.

America’s Central Port Executive Director Dennis Wilmsmeyer and Port Engineer Bill Stahlman briefed the minister and his staff about the history of the port, its operations, and recent infrastructure investments before taking a tour of the port’s developments. They discussed the many benefits of barge operations and how a viable river system can shift trucks from overcrowded roads to waterways.

During the briefing Wilmsmeyer talked about the transfer and conversion of the former Charles Melvin Price Support Center to the current development of the Port District and the infrastructure improvements that the Port has made to attract new businesses to the region since the transfer of the property.

Following the briefing, the group took a tour of the 1,200-acre Port facility, including a stop at the newly constructed Madison Harbor, and then continued north to the Melvin Price Locks and Dam 26.

Other stops on the U.S. tour by the delegation included Washington, D.C., Port of New York/New Jersey, San Francisco, and the Port of Los Angeles/Long Beach.