A student at Southeastern Illinois College (SIC) in Harrisburg, Ill., Jackson (left) was awarded one of two $2,000 memorial scholarships. They are distributed annually to students, who are pursuing degrees that may lead to a career in the ethanol industry and who are working to build a sustainable future that reduces carbon emissions. 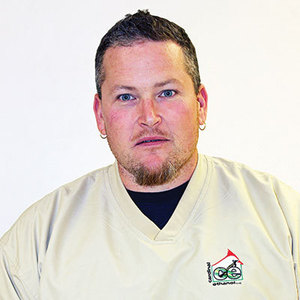 “This award reflects the consortium’s commitment to connecting students with in-demand careers that directly contribute to Illinois’ and the nation’s economic and environmental sustainability,” BIB Project Manager Courtney Breckenridge said. “We are incredibly proud of Donald’s accomplishment and wish him continued success in his career.”

The project management team for the BIB consortium is located at the NCERC at Southern Illinois University Edwardsville.

Jackson has worked as a board operator for Cardinal Ethanol near Union City, Ind., since 2008. He takes classes online while working full time. Except for a two-week break in October 2015, he has completed two assignments every week since April 2015. He believes that his continued education will improve the possibility of moving up in the company.

“SIC’s online biofuels program continues to grow under the leadership of Biofuels Instructor Renee Loesche,” Breckenridge added. “Renee’s commitment to making education accessible to all students through flexible, accelerated scheduling and competency-aligned programming ensures students like Don are able to complete education programs that further their careers. We truly appreciate her dedication to student success.”

SIC is a member of SIUE’s BIB consortium, which is comprised of five higher education institutions spanning the state of Illinois. In addition to SIUE and SIC, partners include Lewis and Clark Community College in Godfrey, Lincoln Land Community College in Springfield and Carl Sandburg College in Galesburg. The consortium was established in 2014 through a $9,956,011 award by the U.S. Dept. of Labor’s Trade Adjustment Assistance Community College and Career Training initiative.