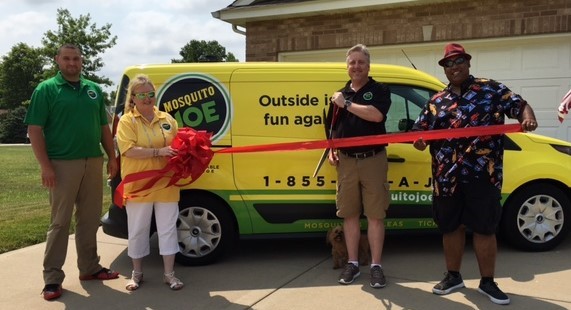 Thanks to no-cost expertise and connections shared by the Small Business Development Center at Southern Illinois University Edwardsville, a new insect control franchise is ready to eliminate flying pests for residents and businesses in Madison County.

Mosquito Joe of Madison County, a franchise owned by Granite City resident James “J.P.” Newcomer, opened for business on May 23.

Newcomer, a business process analyst at Monsanto and a U.S. Air Force retiree, was searching for a franchise opportunity to operate in the Metro East. After working extensively with a franchise consultant in North Carolina between 2015 and 2016, Newcomer decided upon the mosquito control market.

“In a group of people, my wife and I are generally the first ones to get bitten,” Newcomer said. “Mosquito Joe’s unique business model and vector control processes impressed me.”

A Mosquito Joe pest control yard application eliminates biters for 21 days. The trained technician achieves these results by targeted shrubs and plants with a barrier spray that kills mosquitoes on contact and bonds to foliage, where it acts as a repellent for weeks to come.

“Jo Ann was incredibly helpful, offering essential information about what I needed to do to open a franchise in the state of Illinois,” said Newcomer. “There was so much to know in terms of applying for an SBA loan, becoming licensed as a pesticide applicator and more. Once I passed the required state exams, I found that obtaining a state license could take from four to six weeks to complete and could delay, or potentially prevent, my business from opening.

“With the Zika virus popping up everywhere in the news, I wanted to launch this year. After I made attempts directly with the Illinois Department of Agriculture to expedite the process, Jo Ann put me in touch with a USDA director of rural development who made a phone call for me. Within an hour I got a call back and received my license application that became official within 48 hours.”
Newcomer praised the SBDC’s ability to work with small business start-ups as well as existing small businesses.
“I’m grateful to Jo Ann and the SBDC for continually following up with me to see if I need any additional assistance.”

DiMaggio May said providing expertise to Newcomer was easy because he was very well organized and a hard worker.

“James hit the ground running and was eager to start his business,” DiMaggio May said. “He knew he had numerous steps to follow and was receptive to my advice and assistance. James’ military training, strong work ethic and extensive network of supporters will ensure his business success. I can’t wait to see how far he goes with the franchise.”