Simmons Hanly Conroy, the largest plaintiff’s personal injury firm in the St. Louis area, has again matched $25,000 in donations to the “$5 for the Fight.”
Since 2012, the firm’s match challenge has raised more than $175,000 for the “$5 for the Fight” Emergency Relief Fund, established by the Greater St. Louis Labor Council and supported by the United Way. 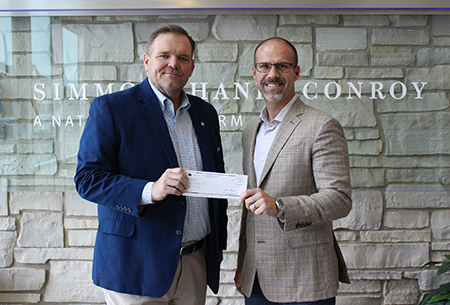 “Our attorneys are committed to helping union families who have been impacted by corporate wrongdoing,” said Simmons Hanly Conroy Shareholder Chris Guinn. “Union tradesmen and women are more likely to be exposed to toxins like asbestos on the job just by the nature of their professions. The Simmons match challenge is a way for us to continue our dedication to union families both in and out of the courtroom.”
The fund, established in 1996, helps union members and their families facing financial hardships. In 2016, 291 families from 61 different unions received help paying their mortgages, utilities, medical bills and more through last year’s fundraising efforts. The “$5 for the Fight” campaign raised just over $75,000 including contributions from other local funds and charities.
“The Simmons law firm once again has shown its loyalty to the labor community with this generous donation,” said Pat White, president of the Greater St. Louis Labor Council. “This fund is set up to help union members in need and is funded mainly by other union members.  To have a friend in the business community such as Simmons is a blessing for all of us. “
The labor council and United Way of Greater St. Louis cover administration costs for the fundraiser, allowing all donations to directly benefit local union families in the Greater St. Louis area. Guinn said he hopes the Simmons match campaign will motivate others to give.
Donations to the “$5 for the Fight” Fund can be made by check or online. Mail a check or money order to “$5 for the Fight,” c/o St. Louis Labor Council, 3301 Hollenberg Drive, Bridgeton, MO 63044 and include your union affiliation if applicable. To make an online donation, visit www.labortribune.com and click “$5 for the Fight” Donations in the right-hand column. An option to create a reoccurring automated donation is also available.