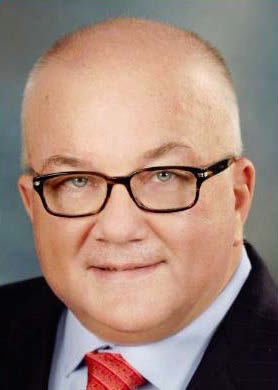 IBJ: How did you get your start in law?

Kurowski: I received my law degree from Saint Louis University and started with a small Belleville firm in 1978. I was 29 years old and four years out of law school when I started my own firm as a solo practice in 1983 in a 125-year-old building in Downtown Belleville. At that time I didn’t have any great aspirations. I just wanted to be the best lawyer that I could be and support my new and young family.

IBJ: What kind of law were you practicing?

Kurowski: I opened a general practice at the time doing a wide variety of things. I did general litigation and defense, real estate, family law. I took on anything I thought I could handle. I hired my first associate in 1986 and then by 1990 we had five lawyers and I moved the practice to a new facility. Bill Shultz joined me in 1999.

IBJ: How many attorneys do you have now?

Kurowski: Today we have 23 attorneys. As the firm has grown, so has its leadership. It has six partners today. In addition to the named partners, the leadership includes David Fisher, Lindsay Dibler, Candice Kusmer and Jerry Warchol.

Kurowski: I think it grew from litigation work we did. We became significantly involved in the asbestos litigation in Madison County and St. Louis and that spurred growth. As a result of our performances there, clients asked us to handle their cases in other parts of the country. By the mid-to-late 1990s, it had become a national practice which we slowly expanded over the years.

IBJ: I would think a company facing asbestos litigation would look for a firm with a track record in the field. Like everything else — how do you get experience when nobody will hire you because you don’t have experience? How did you break into it?

Kurowski: I’d been working as a local counsel for a Chicago firm at the time and learned quite a bit. Then I was interviewed by a large insurer for a major account. I was fortunate enough to be selected. It kind of took off from there. After that, I think it developed from my abilities and performance and that of the firm’s other lawyers.

IBJ: Asbestos litigation is fairly complex science. Isn’t that a particularly difficult thing to cut your teeth on?

Kurowski: Like everything else, litigation lawyers have to learn their client’s product and story and, in this case, the medicine and science. Over the years I was able to try some major cases that required me to be at the top of my game and, fortunately, I was successful.

IBJ: How has your practice grown beyond Southwestern Illinois?

Kurowski: We were first asked to try cases in other parts of the country in the mid-1990s. I spent a lot of time in Texas in the 1990s. Today the litigation is more concentrated in certain cities. We spend a fair amount of our time on cases on the East Coast. We have clients ask us to manage their litigation nationally. If they have cases in the northeast or on the West Coast or elsewhere, from time to time we’re asked to try those cases for them given our expertise.

Kurowski: It is but in recent years we’ve gone back to some of our roots and are involved in several other areas of law. We have been and are looking to expand our local client base in Southwestern Illinois and St. Louis. We also just launched a corporate investigation and compliance practice that we are very excited about. We also have business and transactional capacity. Our litigation capability is high end. We handle what I would call catastrophic cases, complex product liability and commercial cases, schools, local government We have several highly skilled trial lawyers that have tried cases in more than a dozen states.

IBJ: You’ve just completed your move to the 1405 Green Mount Building (in O’Fallon). Aside from jumping into a larger space, this is a much more visible spot than your previous office off North Illinois Street (in Swansea).

Kurowski: That’s what attracted us to it. The building was very attractive and it was in what we felt was probably the fastest-growing and most visible place in the Metro East as well as being very close to downtown St. Louis. We opened our new offices here on June 27.

IBJ: I also understand that you have some international involvements.
Kurowski: Yes. I have had the great pleasure of teaching at a law school in Poland on two occasions in 2006 and 2010 and from that developed an international human rights symposium which I’ve done for 10 years in a row. I do it every October in conjunction with my undergrad alma mater, Loyola University in Chicago. Last year we had over 200 students: Poles, Americans and other foreign students.

IBJ: How did you get started doing that?

Kurowski: It was unexpected, I had this teaching experience in Poland in 2006 that went very well. In the course of it I decided to invite some American students who were studying in Italy to visit my Polish students. As an undergraduate, I had studied at Loyola in Rome. Coincidentally, my son was studying there at the time. Over Thanksgiving we put together a program on human rights which was connected to professors I was working with and it went very well. I was asked to do it again the next year and the rest is history.

IBJ: What do you see in your future?

Kurowski: Well, I’m going to continue to work for a while and continue to manage the firm. Our plan is to pass on the leadership to the other partners and the people coming up and we have initiated that process. The good thing is, as long as I’m healthy, I’ll have something to do. When people retire, they need to stay busy, but not too busy. I like the Gen. MacArthur quote, “Old soldiers never die, they just fade away.” I don’t expect to walk away but slowly work less but still contribute. Today, I very much enjoy working with and mentoring the younger lawyers here and seeing things pass on and that’s part of the process, too, but I’m as active as I’ve ever been and I’m not going anywhere soon.