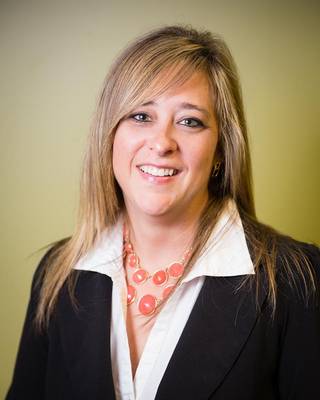 BELLEVILLE — Wendy Pfeil’s new job looks a lot like her last one. The address hasn’t changed and neither have the faces of her colleagues.
Pfeil in June was appointed as executive director of the Greater Belleville Chamber of Commerce, assuming the position of John Lengerman, who retired after eight years at the helm. During those years, Pfeil was director of membership development, a spot that gave her great insight into the needs of local business.
“I have the established relationships, so I think that works out great for members,” she said. “I’m excited to be here and looking forward to the challenges, working with businesses on a different level than I was before.”
Pfeil, 41, was raised in Champaign/Urbana and Decatur, moving with her father as he shifted towns while working with Archer Daniels Midland Co.
A job with Norwest Financial brought her first to Alton, then back to Decatur. A former boss at Norwest then lured her to work at another Metro East business, Firstco Mortgage.
From there, she worked at various mortgage-related jobs before jumping to Clear Channel radio in St. Louis in the early 2000s. The Belleville Chamber became one of her advertising clients. That eventually led to an opening.
“Lo and behold, the membership development director left, and I thought it was the perfect opportunity for me to come back on this side of the river,” she said. “I applied for it and got it.”
Eight years later, she is running the chamber.
“It wasn’t a sure thing that I was going to get it,” she said. “I had to interview and go through the entire process. It was an eye-opening experience to know that I’d earned it and to know that the board of directors thinks I was the right candidate to put in here, too.”
With 550 members, the Belleville Chamber is the largest south of Springfield and the third largest in the St. Louis metropolitan area.
“I want to grow the chamber but we don’t want to grow it at such an outrageous pace that we lose sight of our main mission,” she said. “We really have to grow the old with the new. The old members have the experience but the new ones have the new ideas. Some way, we have to mold and mesh those.”
The organization recently brought back past presidents to get their opinions on the chamber’s direction.
Pfeil said she has always encouraged members to participate in the chamber so that they could get the most out of it.
The chamber, with a $675,000 annual budget, has room for four full-time staff members, but Pfeil’s old job remains vacant for the time being.
“We will eventually be hiring for my old position but right now we are looking at strategic planning and what that position needs to be. It’s completely different than what it started out eight years ago. We want to make sure it’s the right fit and focused on the right areas as we go forward,” she said.
Pfeil, who lives outside Belleville with her husband Chris and two sons, Braeden, 10, and Kaleb, 8, says the  business climate has changed in her eight years at the chamber. For one thing, there are many more smaller businesses than ever before.
Networking with those small businesses is one of the chamber’s many initiatives.
“The mom and pops are the ones that foster the economy. Without those, where would everybody else be? We want to help them network and grow their businesses. You never know when that next lead or sale is going to come around,” Pfeil said.
She said the chamber has recently been “working hard” to improve its Leadership Belleville program, which allows participants to get nine months of leadership training one day a month.
It also has targeted its Annual Belleville Chili Cook-off, growing it by making it more family oriented.
The chamber also has an Economic Development Committee that meets on a monthly basis and works with the city and county’s economic development departments in seeking out new businesses.
“We’ve done a couple of economic development tours where real estate agents have come in to see what Belleville has to offer. We do retention visits with larger corporations to see if any needs need to be addressed and taken to the city and county,” Pfeil said.
The chamber plays host to several community events throughout the year including the Annual Junior Idol Contest, Back2School Fun Fair (formerly BackPACK to School Day) and Annual Belleville Ale Fest and the Annual Chili Chase 5K and Kids Pepper Dash.

ALTON – The 2016 season of the Alton Farmers’ & Artisans’ Market is underway through Oct. 15, in session on Saturday mornings from 8 a.m. until noon and on Wednesday evenings from 4 to 7 in the parking lot at the corner of Landmarks Boulevard and Henry Street.
A new Night Market has been added, also on Wednesdays, from 6 to 9 p.m. at Elijah P’s, 401 Piasa St.
Go to www.DowntownAlton.com for more information.