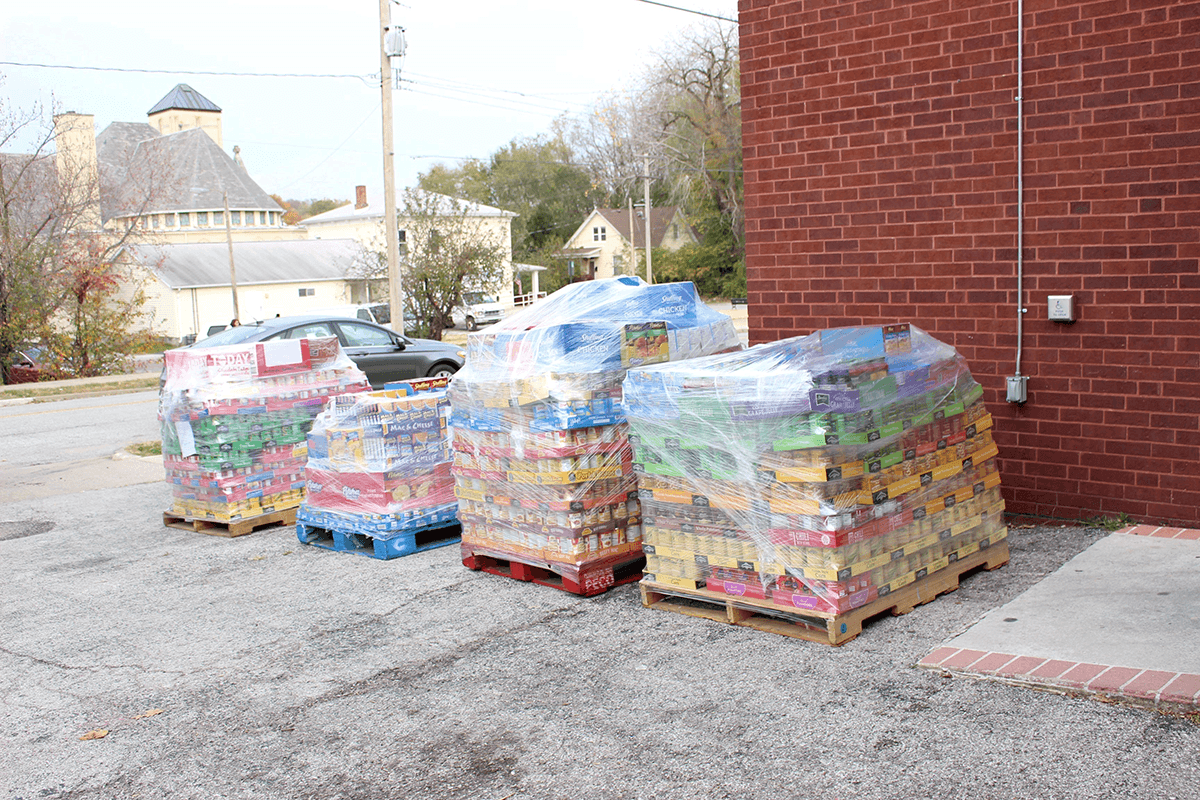 ALTON — Simmons Hanly Conroy employees donated a significant amount of canned items to five Madison County food pantries for the holidays.
The firm’s Alton office collected 25,834 pounds of food during its 10th Annual Simmons Employee Foundation Food Drive. In addition to a 5,000-pound donation of food, each pantry also received a $1,000 donation from the foundation earlier in October.

“We believe in supporting the communities we call home,” said John Simmons, Simmons Hanly Conroy chairman, “and we hope our neighbors and their families are able to eat well and enjoy the upcoming holiday season.”
Pantries that received the food and cash donations included the Crisis Food Center and the Salvation Army in Alton, the Community Hope Center in Cottage Hills, the Collinsville Area Ministerial Association’s Helping Hands Food Pantry in Collinsville and the Community Care Center in Granite City.
“The looks on pantry workers’ faces when the delivery is made, and knowing it goes to help so many people, is what makes the food drive worthwhile,” said Amy Fair, director of SEF and Simmons Hanly Conroy director of medical relations. “We hope this will inspire other people in our communities to take a moment to give back this holiday season.”
The SEF food drive started Oct. 7 and lasted through Nov. 18. Firm employees made donations to participate in several internal activities such as raffle tickets, Fan Day Fridays and a Halloween costume contest. All donations benefited the food drive.
“This year, our supplies have been lower than any other year,” said Holly Allen, social services director at the Alton Salvation Army. “So, to have businesses such as Simmons Hanly Conroy go out of their way to make large donations such as these, we are so grateful.”
Each holiday season, the Alton Salvation Army feeds approximately 300 households. This year, the pantry will provide local families with everything they need to cook Thanksgiving dinners.
“This is the first year in a long time we have decided to bring back Thanksgiving,” Allen said. “Thanksgiving brings the total households fed throughout the entire holiday season to approximately 400.”
If you or someone you know is interested in donating to the Alton Salvation Army, contact Allen at (618) 465-7764, or visit http://www.salvationarmyusa.org/ to donate online or to find a Salvation Army location near you.
Firm offices in New York, Chicago, Los Angeles and San Francisco also participated in the food drive, raising money for pantries in their hometowns. Four $1,000 donations were made by SEF on behalf of the employees in each office to City Harvest in New York, the Greater Chicago Food Pantry, the Marin Food Bank in San Francisco, and the Westside Food Bank in Santa Monica. Additionally, employees in New York donated $3,500 to a virtual food drive, benefiting City Harvest, on top of the foundation’s donation. For every dollar donated, the organization delivers four pounds of food to local soup kitchens and pantries.

About the Simmons Employee Foundation

In late 2004, the employees of Simmons Hanly Conroy came together to create a single, streamlined way for them to give back to the communities they are so proud to call home.  As a result of their creativity and heartfelt commitment, the Simmons Employee Foundation has provided more than $1 million of financial support and countless volunteer hours to charitable organizations.

Simmons Hanly Conroy LLC is one of the nation’s largest mass tort law firms and has recovered more than $5 billion in verdicts and settlements for plaintiffs. Primary areas of litigation include asbestos and mesothelioma, pharmaceutical, consumer protection, environmental and personal injury. The firm’s attorneys have been appointed to leadership in numerous national multidistrict litigations, including Vioxx, Yaz and Toyota Unintended Acceleration. Offices are located in New York City, Chicago, San Francisco, Los Angeles, St. Louis, and Alton, Ill. Read more at www.simmonsfirm.com.