Race celebrates most successful event to date with more than 1,300 participants and $30,000 raised for the Asbestos Disease Awareness Organization

Alton, Ill. (Oct. 10, 2018) – When Washington State resident Diana Stewart crossed the finish line during the 10th Annual Miles for Meso 5K in Alton, Illinois, it was quite the accomplishment. Not only did it mean she finished the challenging course through the hills of Downtown Alton, it meant she had continued to keep a promise made to her late husband several years ago. 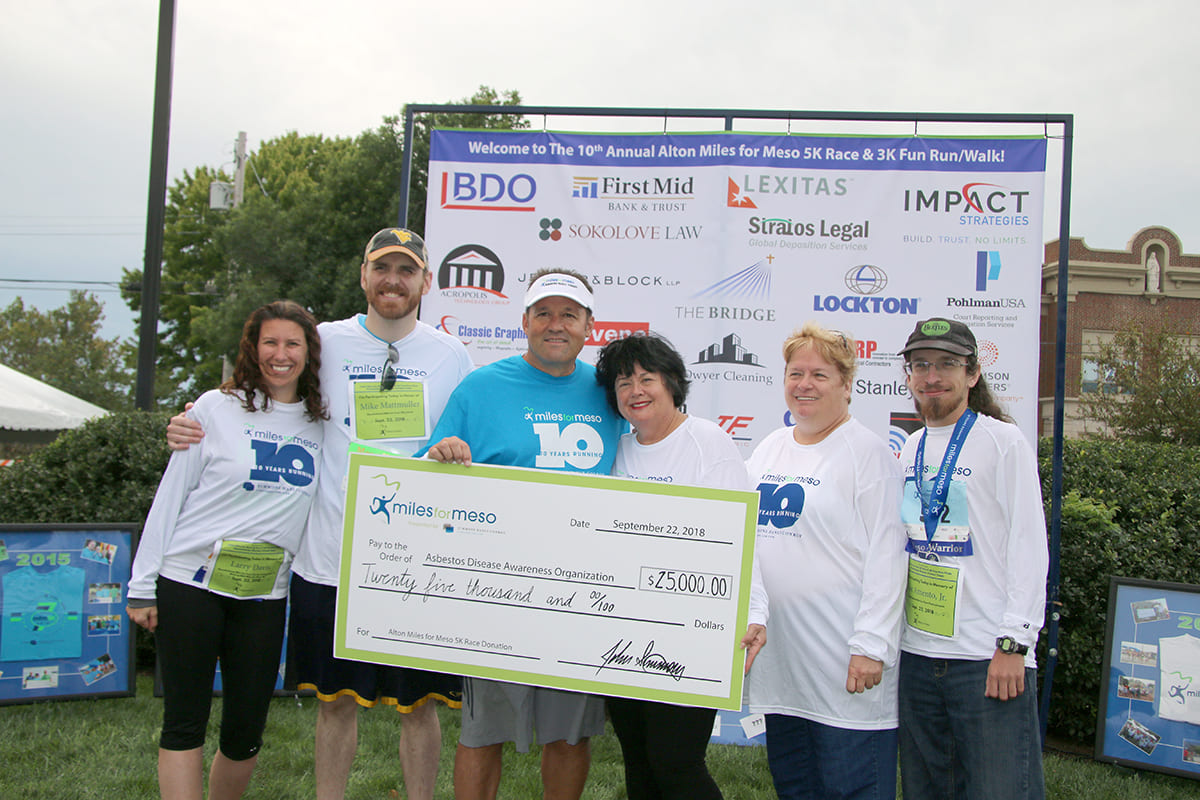 “My husband Bob was diagnosed with mesothelioma in 2008 and passed away after fighting it for nine months. I promised him when he died that I would fight this disease with everything I’ve got and help find a cure,” Stewart said. “Participating in Miles for Meso helps me keep that promise by bringing awareness to others about this devastating disease and how it affects families everywhere.”
Simmons Hanly Conroy, a national leader in the legal representation of mesothelioma patients and their families, created Miles for Meso in 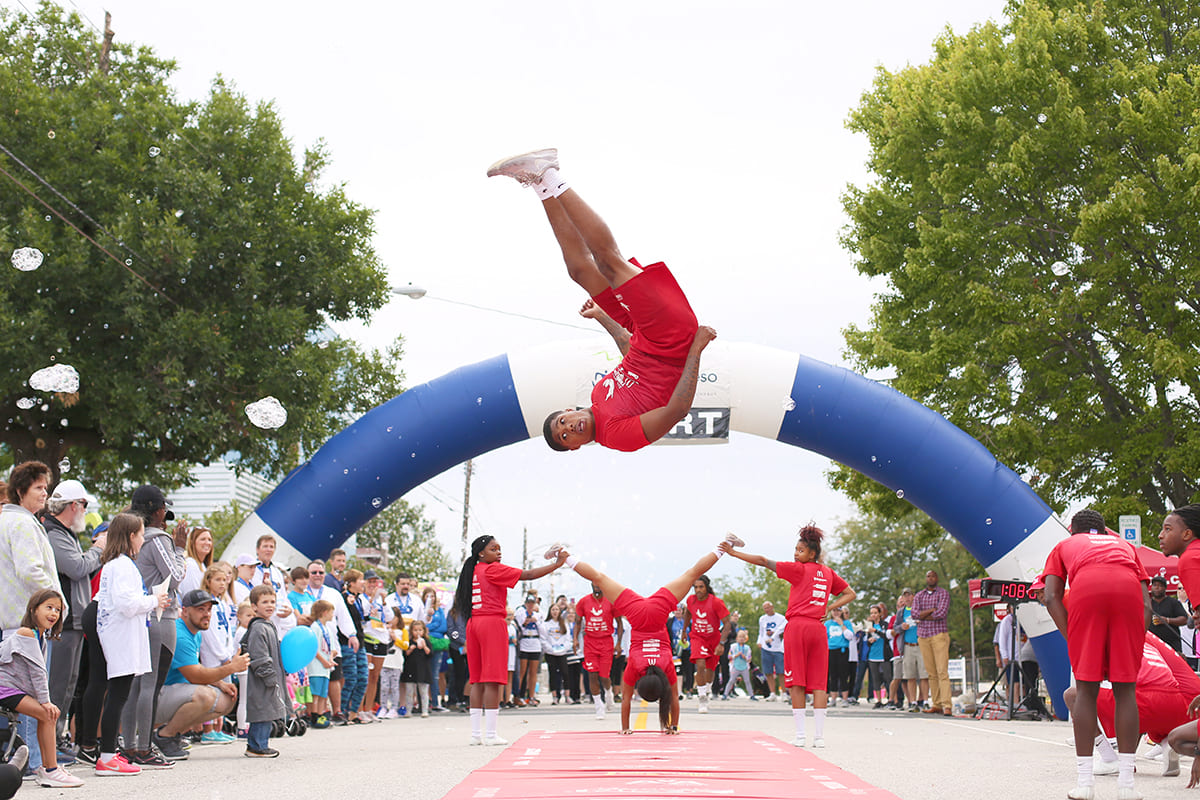 2009 to do just that – bring awareness about the disease and raise money for research. After the race’s first year, the firm’s chairman, John Simmons, realized another important purpose to the race.
“When we hosted the first Miles for Meso, we had no idea how much it would grow and the impact it would have on the people who participated,” Simmons said. “It raised money and awareness, but in the process it also created the opportunity for meso warriors to celebrate their survival and a place for friends and family left behind 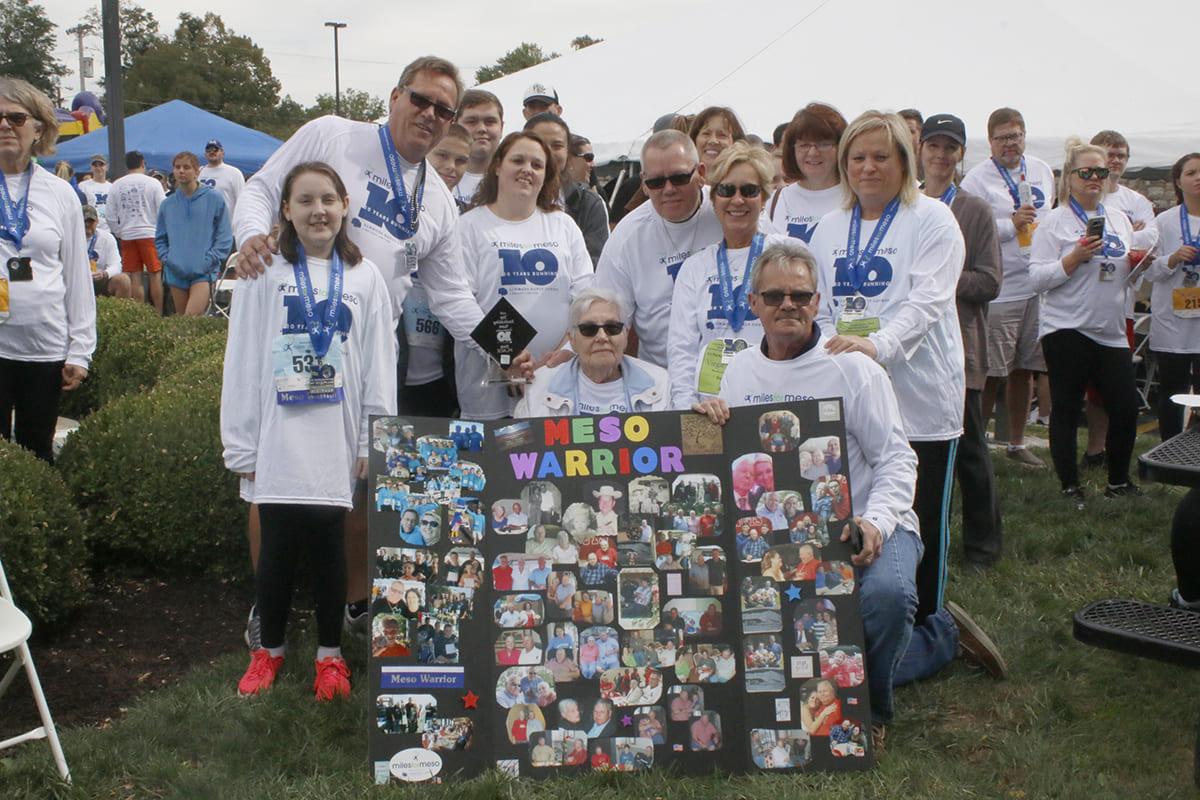 to honor their loved ones.”
For Mike Mattmuller, a Maryland resident diagnosed with mesothelioma in 2011, the community created by Miles for Meso is invaluable.
“Being diagnosed with mesothelioma is a very lonely experience because it’s so rare and so scary,” he said. “The amount of support and appreciation I feel at Miles for Meso is just overwhelming. I look forward to these events to see the other patients and people in the 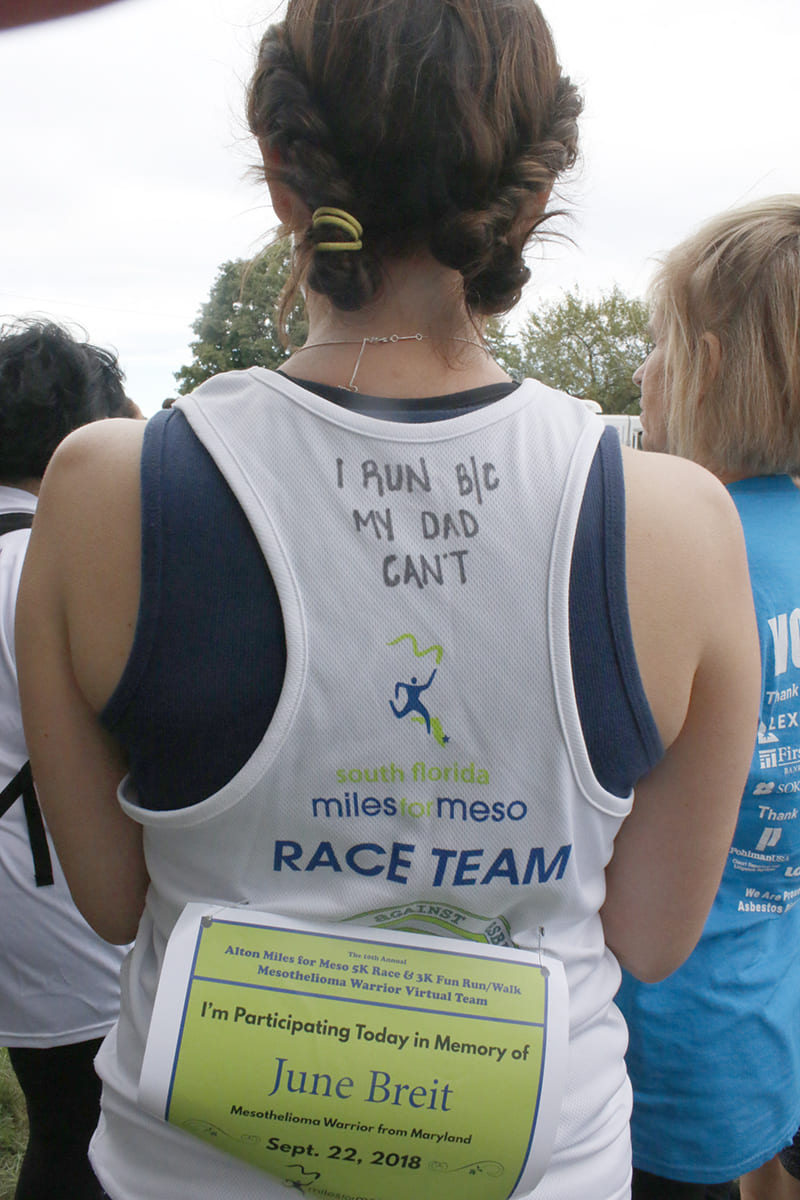 meso community. They’re an extended family that I’ve grown to cherish so much, and because of them, I don’t feel so alone.”
Mattmuller and other meso survivors were far from alone at this year’s race. Held at Simmons Hanly Conroy’s national headquarters in Alton on Sept. 22, the 10th annual race welcomed more than 1,300 participants representing 20 states. Together, they helped raise $30,000 for the Asbestos Disease Awareness Organization, a national non-profit dedicated to securing a U.S. ban on asbestos and supporting families impacted by asbestos.
“I am astounded at the passionate outpouring of community and advocacy seen during this year’s Alton Miles for Meso 5k,” said ADAO President Linda Reinstein. “Events like Miles for Meso provide healing and allow us to join together and increase awareness that asbestos remains legal and lethal in the USA today. ADAO sincerely thanks Simmons Hanly Conroy for their continued leadership in supporting asbestos victims’ civil rights and public health.”
A total of 14 fundraising teams raised close to $4,300 for this year’s donation to ADAO. The top three fundraising teams were recognized during an awards ceremony during the race. The “Georgie Porgie’s Meso Patrol” team took home the top fundraising award with more than $1,150 raised. The team raised money in memory of George Dreith, of Godfrey, Illinois, who passed away from mesothelioma. Second-place honors went to “The Friends and Family of Virgil E. Williams” team, who raised $890 in memory of Virgil E. Williams, while third place went to the “Jogging for Joe” team, who raised approximately $826 in memory of Joe Amento.
The top five overall men and women finishers received more than $2,000 in cash prizes. St. Louis resident Brice Pavey placed first overall in the men’s division with a time of 15:26. Julia Kohnen, also of St. Louis, placed first overall in the women’s division with a time of 17:09. The top-three finishers in 5-year age groups also took home custom Miles for Meso medals. New to this year’s race, every registered participant who crossed the finish line took home a commemorative finisher medal.
The Alton event included a “Kids Zone” area for children with more than 10 activities and games, a petting zoo and pony rides, Miles for Meso store, a vendor fair, pet adoption, photo booths, free food and drinks from multiple food vendors, and entertainment from The Jesse White Tumblers from Chicago.
Since 2009, the Alton Miles for Meso has inspired those affected by mesothelioma across the country to start their own Miles for Meso races. Each sponsored by Simmons Hanly Conroy, races have taken place in Illinois, Florida, Washington, Missouri, Ohio, Virginia, Indiana, New York, Texas and Pennsylvania. Together, they have raised more than $650,000 nationwide for mesothelioma research. The money is raised through a combination of registration fees, personal donations, team fundraising, and corporate donations.
This year’s Alton sponsors included Diamond Sponsors: Stratos Legal, Impact Strategies, First Mid Illinois Bank, BDO (Stone Carlie) and Sokolove Law; Platinum Sponsors: Jenner & Block, The Bridge Church, Lockton Companies, Acropolis Technology Group and PohlmanUSA Court Reporting; Gold Sponsors: Classic Graphics, Huford Architects, Building Stars (Dwyer Cleaning), GRP Mechanical Contractors, Xtreme Green/Watchdog, Covene, FindLaw and Morgan Stanley; and Silver Sponsors: Labor Tribune, Office Essentials, Holland Construction, Pass Security, Fast Eddies, J.F. Electric and Otis Elevator.

About the Asbestos Disease Awareness Organization

The Asbestos Disease Awareness Organization (ADAO) is the largest independent asbestos victims’ organization in the United States. It was founded in 2004 to give asbestos victims and concerned citizens a united voice, to raise public awareness about the dangers of asbestos exposure and to work toward a global asbestos ban. ADAO is dedicated to preventing asbestos-caused diseases through national and international education, advocacy, and community initiatives.
For more information, visit http://www.asbestosdiseaseawareness.org/

About Miles for Meso

Miles for Meso is an initiative of the Simmons Mesothelioma Foundation that was established in 2009 to raise funds and awareness for mesothelioma, a rare cancer caused by asbestos exposure. Miles for Meso races have been held across the country, from New York to Florida to Washington state and several locations in between. Together, Miles for Meso events have raised more than $650,000 to benefit mesothelioma research and awareness.

Simmons Hanly Conroy LLC is one of the nation’s largest mass tort law firms and has recovered more than $5 billion in verdicts and settlements for plaintiffs. Primary areas of litigation include asbestos and mesothelioma, prescription opioids, sexual abuse, pharmaceutical, consumer protection, environmental and personal injury. The attorneys’ passion for improving the lives of asbestos victims and their families extends to the firm’s contributions to mesothelioma cancer research and ongoing support through initiatives including its annual Miles for Meso 5K race and fun run/walk. Firm attorneys have been appointed to leadership in numerous national multidistrict litigations, including prescription opioids, Vioxx, Yaz and Toyota Unintended Acceleration. The firm also represents small and mid-size corporations, inventors and entrepreneurs in matters involving business litigation. Offices are located in New York City, Chicago, San Francisco, Los Angeles, St. Louis, and Alton, Illinois. Read more at www.simmonsfirm.com.