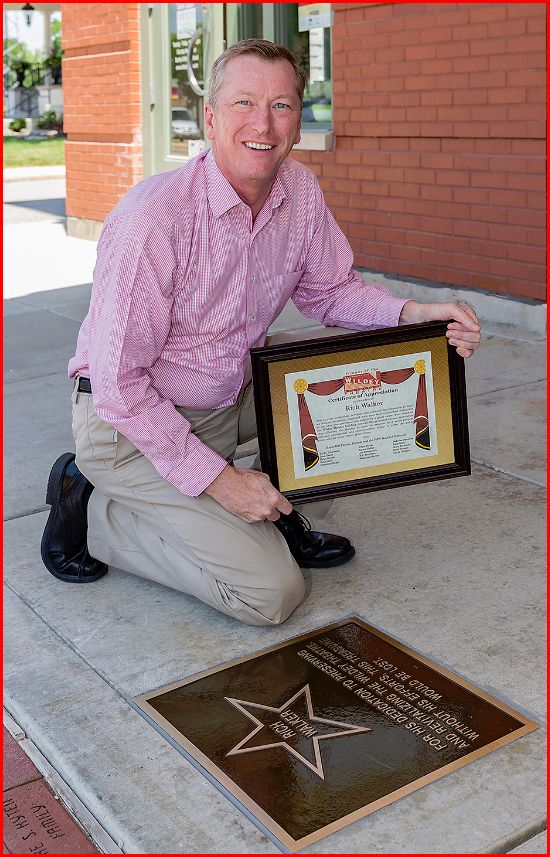 The Friends of the Wildey Theatre, of which Walker is the president, unveiled a bronzed star on Friday that is embedded in the sidewalk in front of the theater at 252 N. Main St.

Walker received the honor for his longtime advocacy, planning and strategic work to help refurbish and reopen the Wildey Theatre, and also for his ongoing support of the historic landmark.

“It is because of the 700 donors and city, staff, mayoral and taxpayer support that we have a thriving, beautiful and historic landmark today,” said a surprised Walker to a crowd of friends and supporters of the Wildey. The group of Wildey Theatre enthusiasts caught Walker off guard as he approached the theater.

Walker is a founding member of the Wildey Theatre Renovation Committee and was on the Edwardsville City Council from 1996-2012, during which time he continued to support efforts to renovate the downtown theatre.

“Rich and I served on the Edwardsville City Council in the late 1990s and early 2000s, and he had a passion on working on the theatre,” said Edwardsville Mayor Hal Patton. “He was extremely organized and detailed when it came to preservation of the Wildey. He put a lot of sleepless nights into restoring this theater back into the gem that it is today.”

Patton said thanks to Walker, Trip Advisor lists the Wildey Theatre as the number one place to visit in Edwardsville.

“I was honored to work with Rich and other members of the Edwardsville City Council on the restoration of the Wildey Theatre,” said former Edwardsville Mayor Gary Niebur. “The Wildey has a long and proud history in Edwardsville, and we are proud of the work that Rich has done.”

According to Joan Evers, official Wildey historian and tour guide, the Wildey opened on April 13, 1909, as a live theater.

“My father and his two brothers were here when it first opened in Edwardsville,” Evers said. “The theatre was owned by a group of the Independent Order of Odd Fellows in North America, who had a branch in Edwardsville. The group was extremely philanthropic and owned the land. Also, many Edwardsville citizens bought stock in the theater.

“The theater was named for the founder of the Independent Order of Odd Fellows, Thomas Wildey,” Evers continued. The theatre was renovated in 1937 and then served as a movie house for almost 50 years.”

The city of Edwardsville, which now owns the Wildey, reopened the theater on April 12, 2011.

Walker’s star is one of three that are part of the sidewalk in front of the theatre. The others are in honor of Gary Niebur and the generations of the Foehrkalb/Evers family.

“The grand, majestic richness of the theater speaks for itself,” Walker said. “To be able to come downtown in Edwardsville on a Friday and Saturday night and encounter a traffic jam because of the Wildey is a wonderful thing. This is what sets Edwardsville apart.”