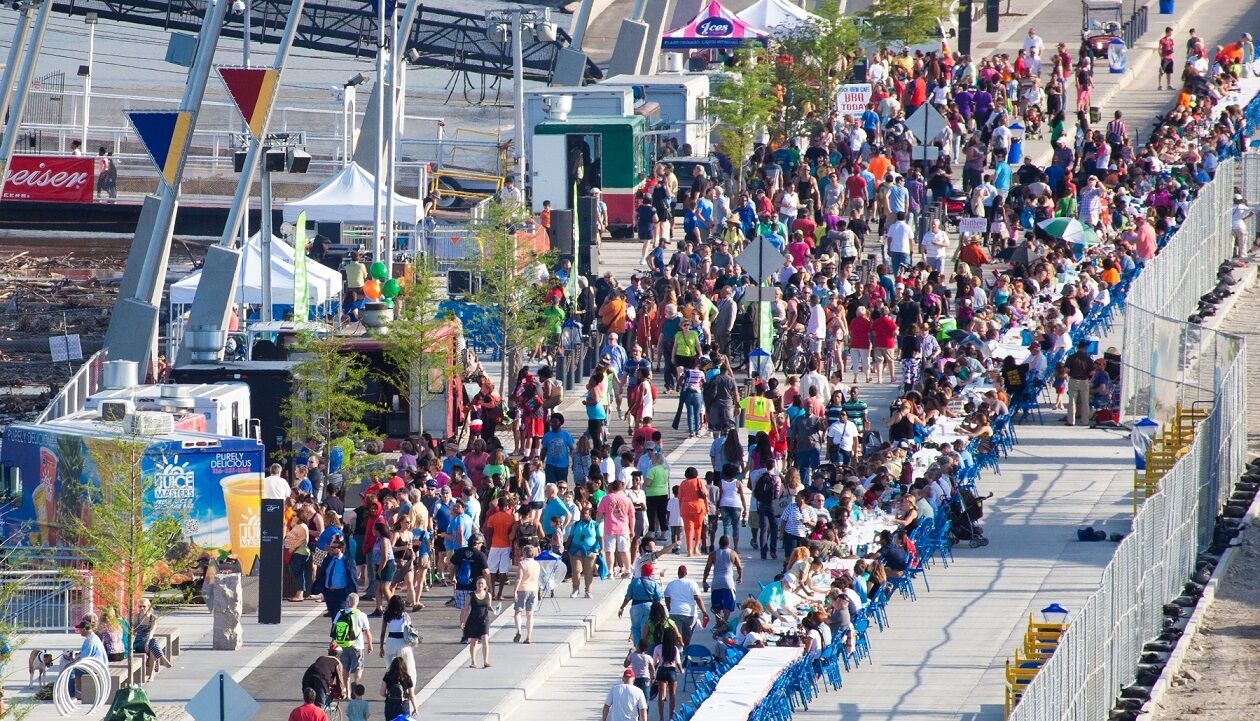 Great Rivers Greenway, the City of St. Louis, CityArchRiver Foundation and other partners gathered Thursday with people from across the region for a “Picnic on the Riverfront” event, which featured St. Louis’ largest-ever community picnic – complete with a 2,016-foot-long table with chairs – to commemorate the opening of the new riverfront beneath the Gateway Arch.

The festivities kicked off with an official ribbon cutting at 5 p.m. on the newly expanded overlook stage along Leonor K. Sullivan Boulevard, with remarks from dignitaries and partners. Afterward, attendees were able to explore the nearby Mississippi Greenway, enjoy local music and educational activities for kids and purchase dinner from food trucks and other vendors.

People were also welcome to bring their own meal to enjoy during the picnic, which officially got underway following an interfaith blessing, as an aerial photographer hovered overhead in a helicopter to capture the unique gathering. A brief fireworks display wrapped up the evening.

“This new front door for our region celebrates the energy, adventure and awe of the mighty Mississippi and our iconic Gateway Arch,” said Susan Trautman, executive director of Great Rivers Greenway, the regional parks and trails district and lead agency on the project. “We are thrilled to have so many people bringing their friends, family and neighbors from all parts of the region to celebrate with us.”

The renovation of the 1.5-mile stretch of riverfront includes the recently rebuilt Leonor K. Sullivan Boulevard and extension of the Mississippi Greenway from the Biddle Street Trailhead south to Chouteau Avenue, with protected walking and biking paths. The entire riverfront was elevated an average of almost two feet to limit flooding, returning more days of the year back to the community for walking, riding bikes, sightseeing and special events.

While the historic elements were preserved, such as the cobblestones lining the levee; new amenities such as benches, bike racks, lights, power outlets and a street-level stage make the space more inviting for events and programs. The lineup for this summer and fall includes bike rides, walk/run events, the St. Louis Brewers Guild Heritage Festival, a free concert series with The Sheldon, swap meets and more.

“The historic riverfront is an important part of the story of the St. Louis region – it’s time to reconnect with our roots and make sure the riverfront is part of our future,” said Mayor Francis Slay.

The riverfront is part of the larger CityArchRiver project to enhance the Gateway Arch experience for all visitors.

“With two projects finished and three more to go, this historic transformation is taking shape,” said Ryan McClure, director of communications for the CityArchRiver Foundation, the nonprofit helping to coordinate the project and overseeing private investment. “When the majority of the Gateway Arch grounds landscaping finishes this fall and the rest of the project is completed in 2017, visitors will get the exceptional experience of a connected city, Arch and river that is active throughout the year.”

The renovations were funded by many partners, including Great Rivers Greenway; the U.S. Department of Transportation, through Transportation Investment Generating Economic Recovery (TIGER) funds; the National Park Service; CityArchRiver Foundation and Bi-State Development.

“The riverfront is a place where everyone is welcome, and it was important that the construction of the project reflect that, too,” said Carey Bundy, project manager for Great Rivers Greenway.

Explore St. Louis contributed the tables and chairs for the Picnic on the Riverfront, and Paramount Convention Services hauled the equipment to and from the event.

Great Rivers Greenway connects the St. Louis region with greenways so people can explore their rivers, parks and communities, making it a vibrant place to live, work and play. Great Rivers Greenway is a regional parks and trails district, created by a vote of the people in the year 2000 to leave a legacy for future generations, and became the steward of the local taxpayers’ investment in the CityArchRiver project with a second vote in 2013. The district serves 1,200 square miles and nearly 2 million citizens in St. Louis City, St. Louis County and St. Charles County.

CityArchRiver is a transformational project that will enhance the Gateway Arch experience for all visitors. The project will create a seamless park experience from the city to the Mississippi River, providing visitors with a more vibrant place to visit, enjoy, and return. CityArchRiver is a public-private partnership including the National Park Service, Missouri Department of Transportation, Great Rivers Greenway, City of St. Louis, Bi-State Development, Jefferson National Parks Association, CityArchRiver Foundation and many other organizations.