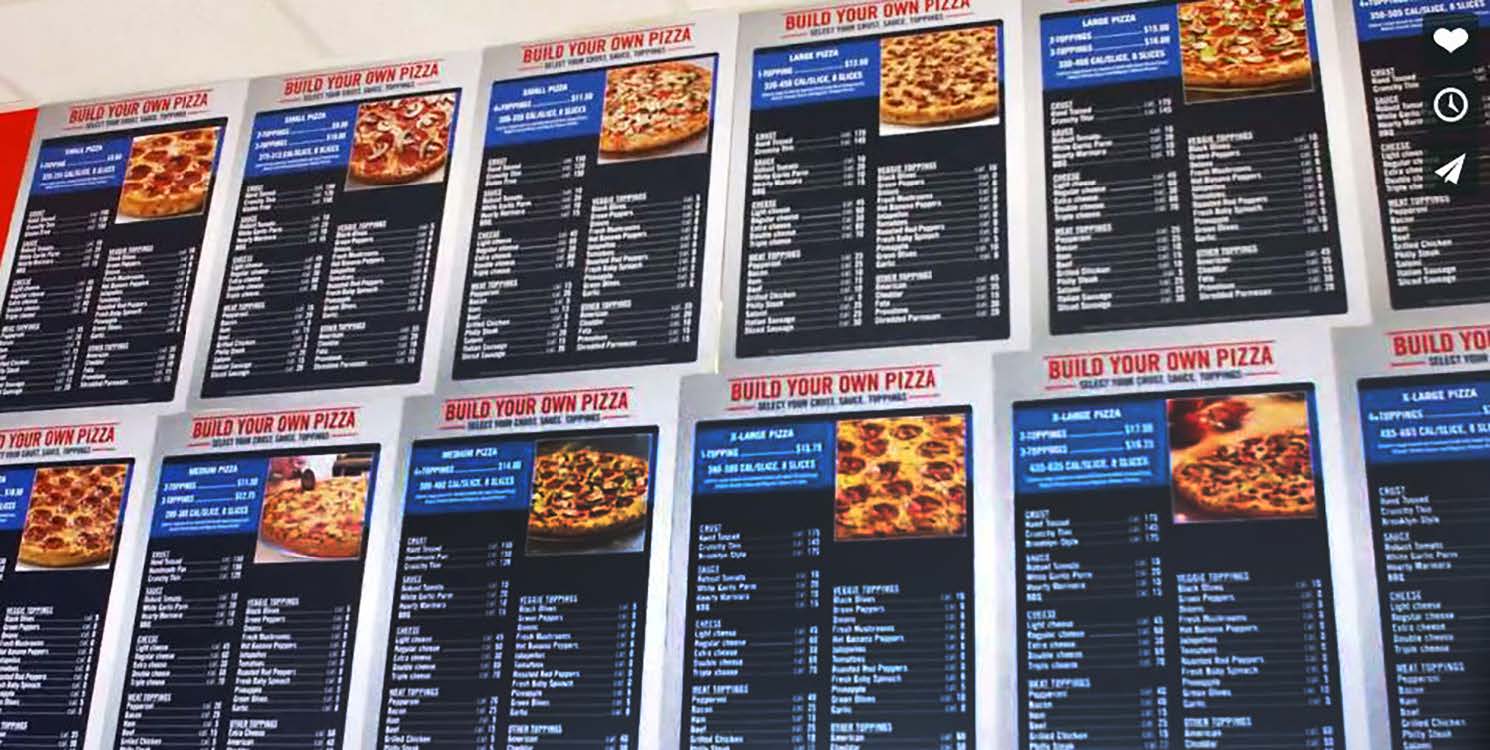 By DENNIS GRUBAUGH
Menu-labeling guidelines handed down by the Food and Drug Administration will do little to educate customers but plenty to hurt small businesses, many in the food-service industry say.
Groups, including those representing pizza and convenience store industries, are urging Congress to enact legislation that will give their members flexibility in meeting new rules, including what they say is the expensive demand to place calorie menu boards at many establishments.
At issue is the FDA guidance that came about after passage of the Affordable Care Act. Section 4205 of the act requires that chain restaurants and similar retail food establishments with 20 or more locations disclose nutrient information for standard menu items.
The uproar over menu labeling began years ago when cities and counties began individually passing menu-labeling ordinances aimed at the fast food industry, trying to get food companies to be more transparent about the nutritional value of their products.
McDonald’s as a corporation finally approached Congress about having a clear federal standard, which the government addressed as part of the Affordable Care Act.

“But as is the case so often in Washington, the legislation was fairly vague and it went to the Food and Drug Administration for final regulation,” said Lyle Beckwith, senior vice president of government relations with the National Association of Convenience Stores.
The resulting guidelines, which were finalized April 29 after six years in the making, stand to be both onerous and expensive, detractors say.
The rules exempt any operators with 20 or fewer stores. However, an individual franchisee with fewer stores may still be subject to the rules if he works under a banner that operates more than 20 stores, such as franchisees under Domino’s.
It’s not just pizza places and convenience stores that should be concerned.
“It’s movie theaters, fast-food restaurants, amusement parks — anybody who sells food that’s meant to be consumed immediately,” Beckwith said.
The National Association of Convenience Stores represents 150,000-plus stores in the country. Together, they sell 86 percent of the gasoline sold, and most of them have food and other merchandise. Among the chains are outlets like Casey’s, CircleK, QuikTrip and 7-11.
“Half of America shops in a convenience store every day,” Beckwith said.
Menu boards are the most troublesome part of the regulations. There is no one-size-fits-all option, Beckwith said.
“What (FDA) came out with works perfectly for McDonald’s. Think about a McDonald’s: If you go to one in Peoria or one in Key West, their menu boards are pretty much the same.
“Now, put yourself in a convenience store. You walk in, there’s food everywhere. They might have a deli, they might not. They might have a grill. It depends on the store, the neighborhood and the company.”
The situation is particularly averse to pizza makers.
Chris Brandon is the director of Investor Relations & Legislative Affairs for Domino’s Pizza, which is a member of the American Pizza Community, a coalition of the nation’s large and small pizza companies.
“Even if people could see (a menu board) and did use it, with 34 million ways to make a pizza, as there are at Domino’s, how in the world are you supposed to represent all those different combinations on a single menu board?” Brandon said.
It would almost take a “wallpaper situation around your entire store, with every ingredient and every single combination listed.”
Franchisees would face an estimated $5,000 per store, per year in expenses because of the new demands, Brandon said.
“If you own a single store, you’re talking about money out of a small-business owner’s pocket for something customers aren’t going to see and does not provide them helpful information,” he said. At Domino’s, 45 percent of stores are owned by a single-store franchisee 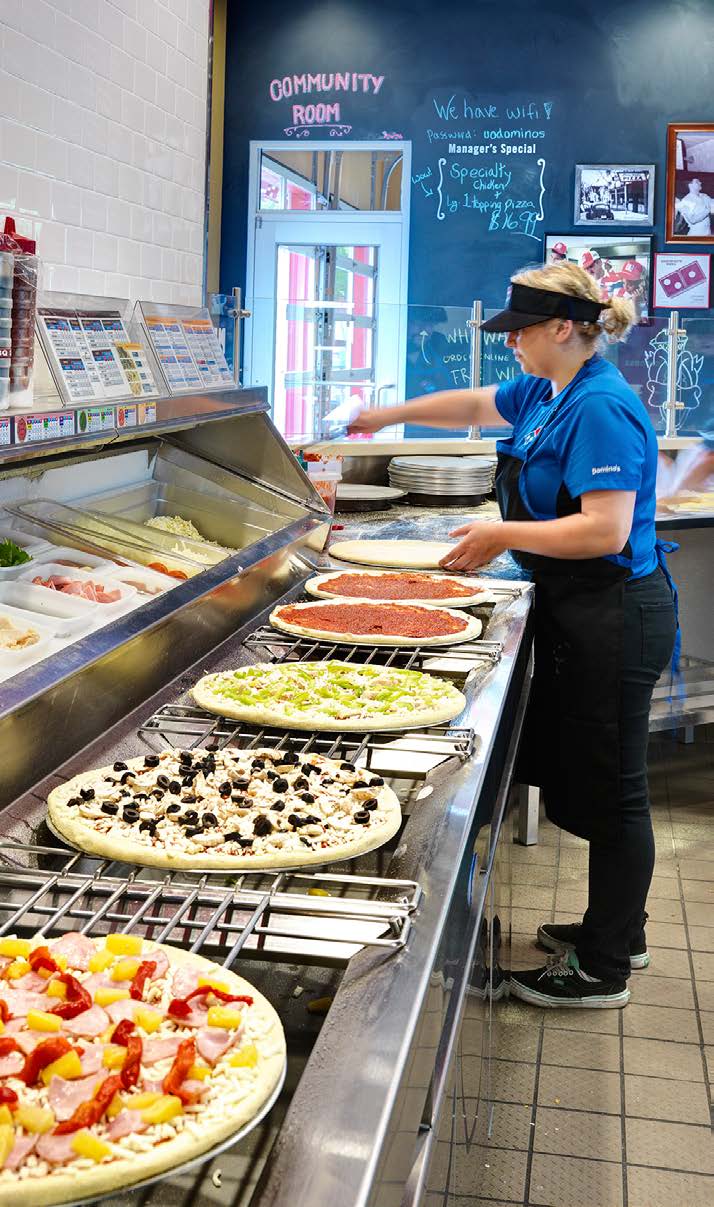 When the problem was brought to the FDA, the agency suggested such companies “do ranges” of caloric content.
“We could show a medium pizza and right next to it, it would say: ‘This medium pizza could be anywhere from 500 to 3,000 calories.’ We’re trying to be helpful, but how helpful is that?” Brandon said. “If the goal is customer education, right now under the rules, we’d fail in that objective.”
Domino’s takes about 90 percent of its orders remotely, so an in-store, physical menu board would only be used by about 1.5 percent of Domino’s customers, Brandon said. Domino’s has been calorie labeling online for almost 14 years and has an online tool called the Cal-O-Meter, a way for people to get customized counts. Such technology could offer a solution to the new menu board demand.
“The solution actually exists; it’s not something that needs to be created from the ground up,” Brandon said. “It’s important to label where your customers are going, and for us and for many others – that’s online.”
Customers could theoretically plug in ingredients for a personalized pizza and calculate the calories for themselves.
Domino’s has a vertically integrated digital ordering platform that it manages in house, which would take care of the menu labeling for franchisees.
“If you’re a store operator, an online order comes through the exact same way as a non-digital order. Other than including some store offers on line, they don’t have to manage any of that on-line process locally. We have a little Silicon Valley here in Ann Arbor, Mich.,” Brandon said.
Any violation of the law would also be a violation of the Food Drug and Cosmetic Act, which is a felony, which leads to a whole series of other questions, Beckwith said.
“Think about a convenience store and the heavy handed worker who puts a couple extra slices of cheese on a sandwich (and goes over the calorie count). Who gets the felony? Is it the employee? Is it the manager? It is the president of the company? We can’t even get that information from the FDA.”
Both the convenience industry and the American Pizza Community are pushing for adoption of the Common Sense Nutrition Disclosure Act (H.R. 2017/S. 2217). The association said in a statement that the bill would enable businesses to provide customers with important information “but in a way that is actually useful to them, accurate, and takes into account the business model of small business pizza delivery restaurants.”
Time is dwindling down. Business have one year from the issuing of the final FDA rules (April 29) to meet the mandates.
The legislation has passed the House on a bipartisan vote and has been held in a Senate committee since February.
Among the bipartisan bill sponsors are U.S. Sens. Roy Blunt, R-Mo., and Claire McCaskill, D-Mo.
“If we get a vote in committee, I think there’s a strong likelihood that it will pass through the Senate. The biggest problem in Washington today is not the argument, it’s getting the ‘court time’,” Beckwith said.

One franchisee sees rules as costly and growth inhibiting
By DENNIS GRUBAUGH
Southwestern Illinois’ biggest pizza franchisee says that new Food and Drug Administration regulations dealing with menu labeling are going to cost him a lot of money.
“What we need to have is more common sense on this. We need to have menu labeling, but there is a better way to do it,” said Mark Ratterman, a Domino’s franchisee with 73 stores throughout the St. Louis market. In Metro East, they range from Alton in the north to Columbia in the south.
The idea of having physical menu boards in pizza parlors is impractical at best, given the combinations that people consider.
“There all are sorts of options. Some people just like to have cheese on a pizza. Some don’t like sauce or cheese. They want just vegetables or just meat. In today’s digital world it doesn’t make sense to put that all that on paper, or in a store, when you can do it digitally, on line. Let the customer look up the combination they are interested in so they can make informed decisions on their own.
Central to the American Pizza Community’s argument is that digital platforms can be much less expensive and changed as needed.
“I think it’s tough enough just to operate a business in today’s environment with all the challenges you have, health-care costs and everything else. But when you throw on additional regulations … it has some unintended consequences,” Ratterman said.
“We estimate this will cost us about $5,000 per store per year. Items change. Toppings change. It’s tough enough to operate a store in today’s environment, when you throw that additional burden onto a store, some stores aren’t going to be making money and might have to close.”
Menu boards now in the store feature pictures of the product, sizes and prizes — pretty much what most walk-in customers will need, he said.
“Most of our customers place their orders on line. We do have menus in the stores, but they typically know what they want to order when they come in.”
He added: “The intent is great. We need to educate all of our customers about what they’re eating. But we think doing it on line is the most reliable. You can update it daily. If you had menu boards, you could only update it once a year and it would be very costly.”
He put his company’s personal cost at $365,000 a year.
“That’s the cost of building a brand new store,” or hiring several workers. And the prospect for raising the minimum wage only adds to that latter concern, Ratterman said.
The rule now states that stores with 20 and fewer locations are exempt, which puts neighboring businesses on an unlevel playing field in terms of expenses.
“I’m a small businessman, I pay my taxes here, but if the sub shop down the street with five locations doesn’t have to do it, they have an unfair advantage.”
Ratterman also said growth-oriented businesses will think twice about exceeding 20 stores.
“Let’s say I am a growing business with 19 locations. Why would I want to grow (more), if I’m going to have this extra cost?”
Posted in 2016 June Issue