By ALAN J. ORTBALS
Granite City got some good news last month as the U.S. Department of Commerce socked Chinese steel manufacturers with duties of more than 500 percent on their cold-rolled steel being imported into the United States.
In a final ruling, the Commerce Department added anti-subsidy duties of 256.4 percent to anti-dumping duties of 265.8 percent on steel produced by mills including Baosteel Group and subsidiaries of Ansteel Group, known as Angang. It imposed much smaller tariffs on Japanese steel producers.
The U.K. and European Union have been urged to follow America’s lead. The EU has a tariff of just 16 percent on Chinese cold-rolled steel but EU countries are at odds over whether to impose higher import tariffs. 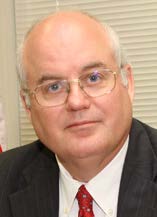 Last year Madison County Chairman Alan Dunstan went to Washington, D.C., to testify to the Department of Commerce and the International Trade Commission regarding the importance of taking action to protect American steel manufacturers.
There are two main impediments, he said, to reopening the U.S. Steel Granite City Works: cheap imports and a market glut. Action on the import duties will help solve the problem going forward but there remains a glut of cheap steel that will need to be used up before triggering a demand for new steel production.
“Our Congressional team was very receptive when we met them, both Democrat and Republican,” Dunstan said. “This is not a Democrat or Republican issue. Everyone we met with in Washington, D.C., both congressmen and senators, all agreed. They knew about the problem with the dumping of the steel and they were on board with the new trade remedies.”
He added: “All the workers want at U.S. Steel’s Granite City Works is a level playing field. You don’t have a level playing field when the other side is selling government-subsidized steel.”
Chinese steel capacity has soared in the past decade to more than 1 billion tons, sending surplus production flooding into international markets especially after domestic consumption peaked in 2013. Beijing has been unwilling to cut capacity for fear of triggering the failure of some of its large mills, especially those of state-owned groups that are often the biggest employers, taxpayers and borrowers in their locality. In fact, following the announcement of the huge trade duties, China’s Ministry of Finance said it would “continue to implement a tax rebate policy on steel exports”
According to the Organization for Economic Cooperation and Development, there are 600 to 700 million tons of surplus steel worldwide.
Other countries, including India, Italy, South Korea and Taiwan, have also been cited as contributing to the global steel glut. And that doesn’t appear to be ending anytime soon.
The OECD forecast that global steelmaking capacity is projected to increase to 2.36 billion tons by 2017, up from 2.16 billion tons in 2013. In addition, the forecast predicted that non-OECD economies such as China are expected to lead this growth in the global steel industry, pushing its share of world capacity to more than 70 percent by 2017.
In December 2015, U.S. Steel began laying off employees at the Granite City plant.  In the following four months, some 1,500 employees were laid off and additional layoffs are expected. Approximately 40 percent of the employees live in the Granite City area.  Of the other 60 percent of the mill’s employees, the majority live in Madison County.
“Granite City Steel is a very important employer in Madison County-not just Granite City,” Dunstan said. “If you go down there and talk to the bar and restaurant owners and mom and pop shops, they’re all having problems, too. There’s a lot of trucking firms there that were doing trucking for Granite City Steel. They’ve had layoffs. This has not just affected the 1,500 that are laid off from Granite City Steel, it’s affected other people in the area who support this industry also. So it’s very important that we get this back running as soon as possible.”
Taxing districts are greatly impacted as well, by plummeting tax revenue needed to support vital services, according to Dunstan.  He said that Granite City Steel alone annually pays approximately $2.9 million in property taxes to the local school district.
The unemployment rate in Granite City has jumped from 7.1 percent to 9.6 percent as a result of the mill’s layoffs.
Dunstan says that he believes that, despite the closure, U.S. Steel recognizes the value of the Granite City plant. He said that in the last five years the company has invested heavily in modernizing the mill, spending more than $271 million.  In 2008, U.S. Steel and Sun Coke Industry jointly invested more than $600 million in a new steam powered, co-generation plant adjacent to the mill.
A problem for the plant is that its largest customer is the gas and oil business which has been slumping due to extremely low oil prices leading some domestic producers to shut down. However, oil prices have recently climbed over the $45 per barrel price after falling below $30 last year.
Dunstan said he’s also met with a lobbyist for U.S. Steel to encourage the company to expand its product lines so the Granite City plant won’t be so dependent on one industry.