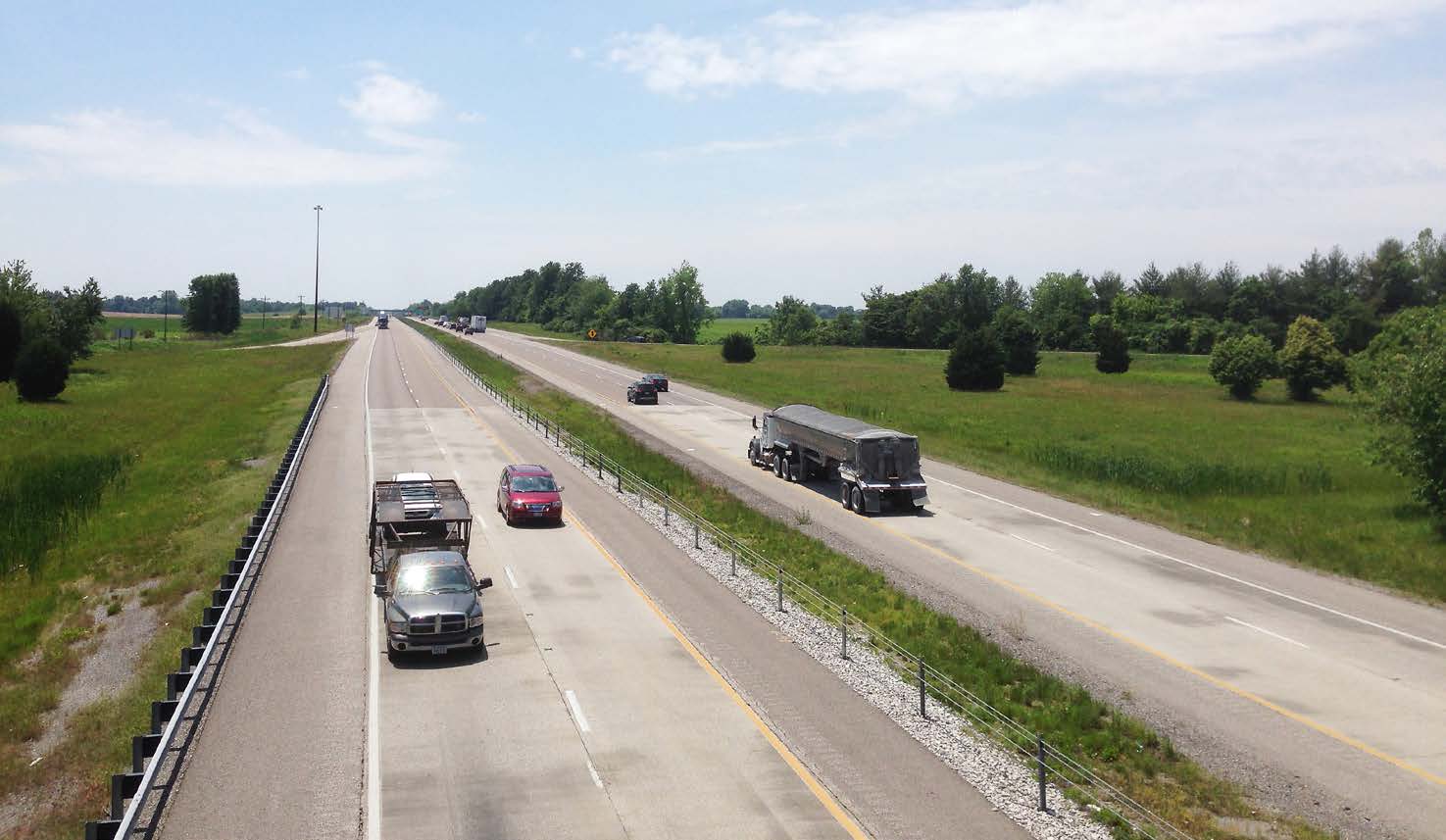 By DENNIS GRUBAUGH
The I-55 Corridor Development Code, a regulatory and zoning code that aims to quietly coordinate the growth of several interstate-blessed communities, but a source of its own growing pains, is finally coming to the end of one road — and the beginning of another.
After 13, sometimes tumultuous years, the city of Edwardsville this summer is likely to sign off on documents that broadly link the interests of Edwardsville, Glen Carbon, Troy and Madison County, at least as far as they pertain to development along Interstate 55, the north-south axis that connects them all.
Historically, Glen Carbon and Edwardsville have grown greatly at their core. Now, the I-55 Development Code is intended to address the next several years of growth from the core to the east, in the direction of the interstate.
The planning began in 2003, and only a handful of people intimately involved with the process then are still involved at any level today. Edwardsville City Administrator Tim Harr was there at the beginning but as an employee of the Public Works Department. City Planner Scott Hanson took on much of the Corridor 55 planning when he arrived in 2009.

“The city was interested in taking a different approach (to growth) and in partnering with Glen Carbon and the county,” Hanson said. One of the biggest reasons was the expected growth at I-55 and Illinois Route 143.
That prediction, of course, is coming true. Route 143 represents one of the great jumping off points for growth. Two businesses have located headquarters at the interchange — Hortica Insurance & Employee Benefits and Scott Credit Union — and a third, Prairie Farms, has committed to do the same thing.
But the I-55 Development Code is not just the interstate. It represents the potential for growth for miles around the 143 interchange.

How the planning began

Harr remembers the early conversations centering around infrastructure, particularly getting water lines extended to the east. At the time, the city was getting petitions for small subdivisions, “mom and pop properties 20 acres and fewer,” he said.
Back then, there also seemed a sense of urgency because Edwardsville was building more than a hundred homes a year.
“We looked like we were going to eat up that corridor pretty quickly,” Harr recalled.
Harr said the city approached Edwardsville/Glen Carbon Alliance, a now-disbanded development agency, about getting community officials together to talk about mutual planning needs and common standards.
Former SIUE planner Bob Koepke and Richard Madison, a city alderman, both now deceased, were very active early on. So was Joe Parente, then a county planner and now the county’s director of administration.
“We started developing these little action teams. Some folks focused on infrastructure, some focused on business, some on education, and on and on. We’d meet individually and then collectively,” Harr said.
In 2004, the municipalities hired HOK Consultants through a grant from the state of Illinois to do some long-term planning. By 2006, Edwardsville, Glen Carbon and the county all adopted Phase 1 of the HOK plan as part of their official comprehensive plans. However, Phase 1 carried with it a “60-year build-out,” which was arguably more than planners were comfortable sticking with.
“It was a big area. It went all the way to Silver Creek (near Marine) on the east,” Hanson said.
H3 Studio, a consultant firm from St. Louis, was then hired as a Phase 2 consultant. That agency thought it was best to narrow the scope.
“It became more of a 15- to 20-year build-out and narrowed in around that I-55/Marine Road (Route 143) interchange,” Hanson said. “Even now, though, it’s still a 15-square-mile buildable area. It’s still a big area.”

Controversy along the way

Early public meetings about the I-55 plan raised a ruckus among landowners concerned over their property rights.
“The first few weren’t fun — there was a lot of screaming and yelling,” said Frank Miles, who is currently Madison County Community Development administrator but was the county planning director at the time.
“There was a lot of suspicion, a lot of concerns, from the folks who lived out there. They didn’t live in Edwardsville, they lived in the county,” Miles said. “I set about setting up a series of meetings to try to help explain that (a plan for growth) wasn’t a bad thing. After a period of time we were able to convince folks that they needed a plan, and not just hodge-podge development. It’s better to have organization.
The Madison County Planning and Development Department has been the grant administrator for the planning all along the way.
Hanson said many of the original opponents were from the Pin Oak area outside Edwardsville.
“Their main concern was protecting large farms that had been in their families for generations,” he said. They believed the corridor push would take away their ownership rights or their livelihoods.
The plan — and the maps that went along with it — have greatly changed through the years. Even, now, the latest version of the map doesn’t show a few of the properties that have been dropped or added. Planners decided to concentrate less on established subdivisions and more on areas not yet developed.

Planning in the I-55 Corridor area was moving swiftly until the recession struck and homebuilding dwindled, giving planners time to smooth out some of the issues, Hanson said. Community leaders spent about three years refining the plan. Some changes were made to appease complaints.
“A previous version of the plan showed a corporate campus and a possible interchange at Goshen Road or at Mick Road (both east-west routes). But given the (economic) state that Illinois is in and the proximity of (other interchanges) the possibility of getting another interchange in the next 20 years is unlikely. Maybe beyond that,” Hanson said. “So, for us to show that on a map as a corporate campus — a Monsanto-type, large pastoral place for research — is probably not reasonable without an interchange. And the interchange is not reasonable either. So rather than tell people this is commercial property and you can’t do anything with it, we said for this phase we’ll just take it out.
“When we did that, and showed it as rural residential on the east side of 55 and neighborhood residential on the west side, they were pleased.”
At least that was the reaction judging from the last public meetings, held in 2013 and 2014 at Liberty Middle School in Edwardsville. Hundreds of people attended to review the outcomes of a 2010 public meeting in which they had taken a “visual preference survey” regarding various types of growth.
Some of their choices had been as simple as picking between duck ponds vs. decorative ponds with fountains. But there were dozens of such choices.
H3 also provided samples of relative regulatory codes, and the towns moved forward from there. In 2015, communities began the official adoption process.

“Our planning commission met about this time last year. By August last year they recommended it be forwarded to council. Glen Carbon was closely following behind. They adopted the plan in December/January. The county is waiting to see what we’re going to do, then they’ll follow suit,” Hanson said.
Edwardsville City Council members have been wrestling with it in recent weeks and should be able to complete it before summer’s end, he said.
City Administrator Harr said one of the primary differences between Edwardsville and Glen Carbon, regarding the corridor, is progress.
“We’ve actually started development in that corridor,” Harr said. “I don’t think Glen Carbon really has; it’s still agricultural. Because we’ve already started development, we’ve got a better vision of how it’s going to turn out.”
For Edwardsville, some of the next development will be west of the interstate. Anderson Hospital has purchased land for physicians’ office construction across from the YMCA Meyer Center on Goshen Road. And a large sports park is now envisioned at Ridgeview and Goshen roads. A $300,000 grant toward land acquisition for the park was announced at the end of May.
Many hundreds of dwellings could still be built in the I-55 Corridor area of Edwardsville, they said, particularly in what they call the Town Center, a mixed-use area dominated by the Goshen Road and Ridgeview intersection. Having an I-55 interchange in that area would assist the development, both residential and commercial, but that is a long-term choice of the Illinois Department of Transportation. Edwardsville is keeping that option on its comprehensive plan.
“The reality is that decision is IDOT’s and they won’t make that decision until there is a specific need,” Harr said.
“Controlled development” is at the core of everything that’s being done, Harr said.
The city has been looking at subdivision covenants and restrictions for subdivisions built in the last 10 years to get a feel for standards that will be used going forward, from infrastructure to architecture. The idea is to have a plan acceptable to both the City Council and builders.
“We’ve been a little more hesitant to pass the plan without digging a lot more deeply into some of the areas,” Harr said. Obviously we’ve had a lot more inquiry from the major property owners out there, as to how they want to see things developed.”
Hanson describes the plan as a unique approach that uses what he calls a “form base code.” Traditional zoning separates residential and commercial zoning. Form base code cares less about uses of property and more what properties look like. It mixes uses together. Hanson used the example of downtown Edwardsville where there is residential upstairs and commercial down.
With the I-55 Corridor, the challenge has been educating property owners about the possibilities. Along the way, the city has clarified its message.
Harr said: “At some point when you decide to sell your land to a developer, this is how the city would like to see it developed.” On the other hand, “if you want to farm it for another 50 years, do what you need to do.”
The regional development approach is kind of unique. It’s not often that communities chase after common development standards. Hanson and Harr gives a lot of credit to Madison County for leading this charge.  Matt Brandmeyer has served as the county planning director for the past six years since Miles’ departure from that position in early 2010.  During this time, Brandmeyer has served as point-man on many fronts to ensure the often challenging planning process on issues diverse as transportation and stormwater control kept moving forward.
“While the task of coordinating the perspectives of residents, land owners, and builders, and officials with three local governments to make sure all interested parties are heard is what ‘planners’ do, it’s still often a monumental effort,” Hanson said. “Edwardsville and Glen Carbon had important planning roles too, but without the leadership from the county through Mr. Brandmeyer to get us to this point, I can honestly say there would not be an I-55 plan or code.”
H3, the planning company that handled Phase 2, did a lot to involve the community, Miles said, by pointing out that proper planning would also protect woodlands and water quality.
“It’s a tremendous watershed. And the longest contiguous hardwood forest is in that Silver Creek area. Song birds that come from South America fly there, and it’s the only place in the United States where that occurs,” Miles said.
Troy Mayor Al Adomite has been much more involved in the I-55 Corridor than his predecessor, even though the planning area is just on the periphery of the city.
The planning area extends to Troy in the narrow area of I-55 between Interstate 70 and Maple Grove Road.
Adomite said in recent years Troy has established or re-established boundaries with Maryville and Glen Carbon because the towns had grown so close to each other.
Troy doesn’t have much land actually in the corridor but will benefit from anything that goes on nearby.
“I think the more buildings that get built — like the Prairie Farms at 143 — it’s all good for Troy,” he said. “We’re going to provide services, restaurants, that sort of thing, that  are a quick hop on, hop off the interstate, a couple of miles south.” 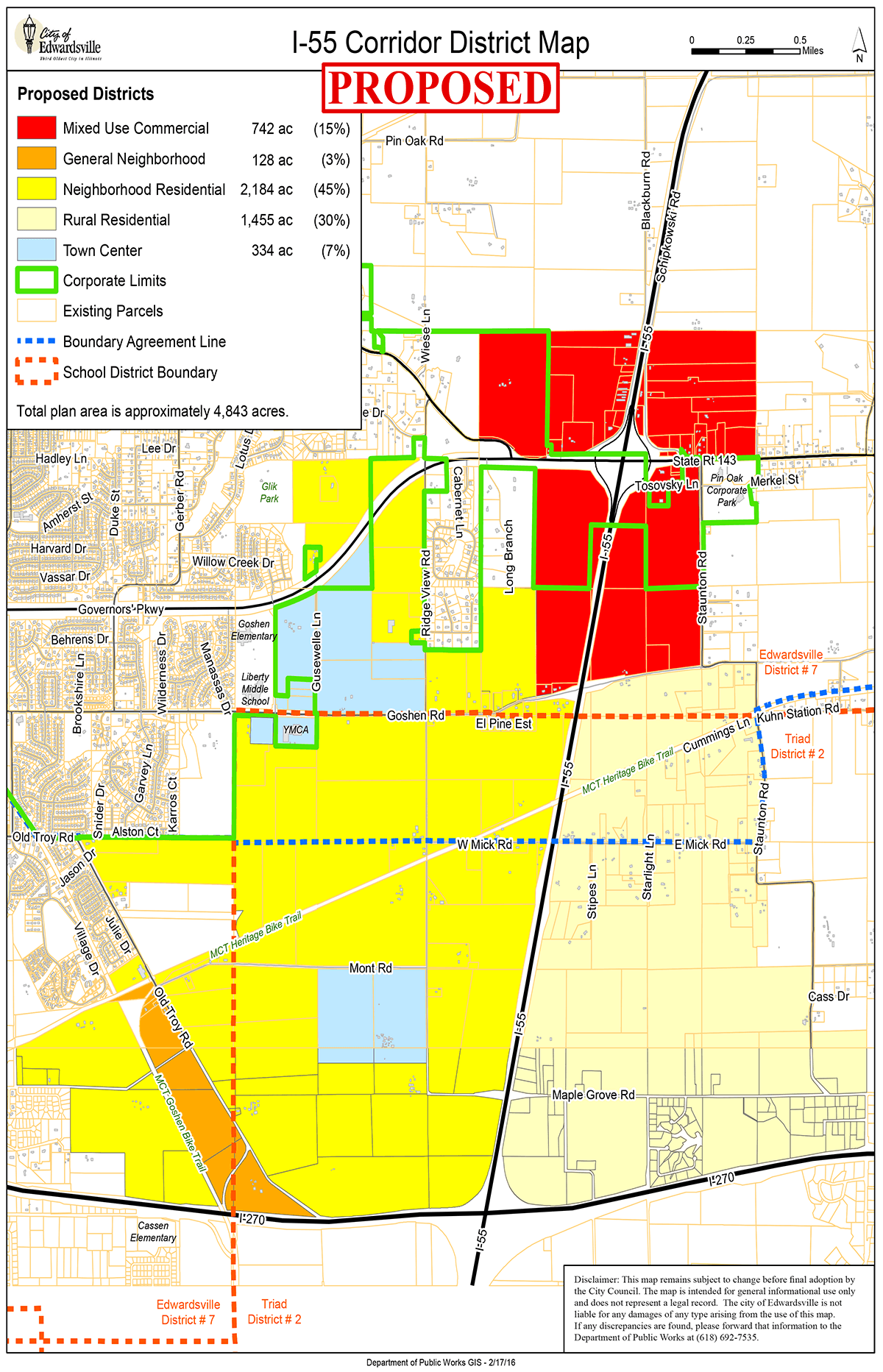