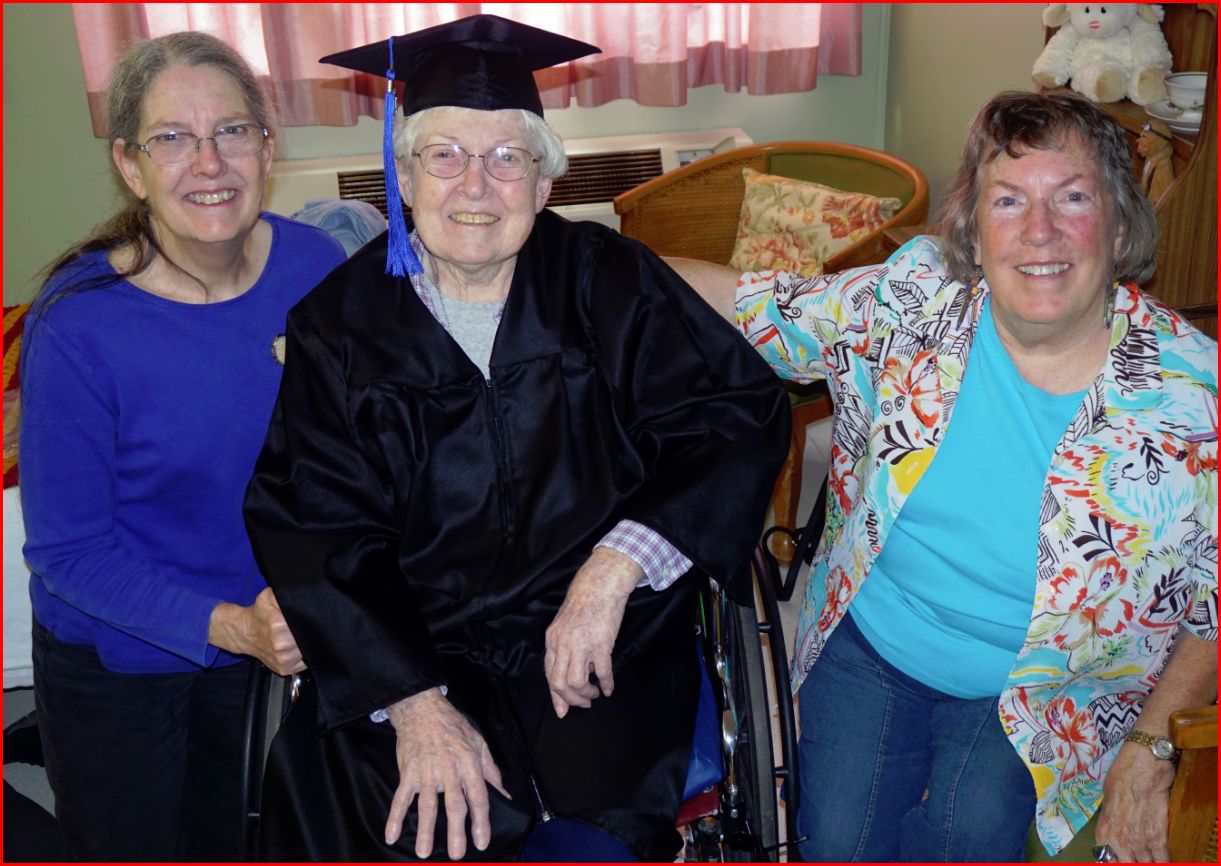 Mary Downard in cap and gown, ready for her college graduation, with daughters Alice Bartelli, left, and Jan Hill.

That might be about the only concession Mary is making to her age. She will be 92 in June. But the Eunice Smith Home resident is still very proud to receive her Associate’s Degree in General Studies from Lewis and Clark Community College, which she did on May 18 to a standing ovation from the audience.

“Now my great nephew teases me since I have a degree that I need to go out and get a job,” Mary said with big laugh. “He wants me to go out and do something with my life.”

Her daughters know Mary has done plenty with her life. She took several college courses in the 1970s and came up six hours shy of a degree. But she was raising four daughters in addition to running Hill Lumber Company in Greenfield, Ill., along with her husband, Byron Hill.

“My dad died in 1978,” said Mary’s daughter, Alice Bartelli. “Mom got remarried (to Jim Downard) and moved to Indiana. At that time, junior college credits didn’t transfer to another state. She regretted not finishing and it always stayed on her mind.”

Jim and Mary Downard moved back to the area in 2012 and Jim died shortly thereafter. Last fall, Alice wrote a letter to LCCC to see if her mother’s life experiences could be counted toward earning her degree. The answer was yes.

“She wanted to know if she could take more classes, but her medical condition just wouldn’t allow it,” Alice said. “But she is very proud and excited. And we have a very large and close extended family. She only has two biological grandchildren, but Jim Downard had six grandchildren, and they consider Mom as their own grandmother. Plus there are lots of cousins, and Mom’s sister lives right here in Alton. It will be a big celebration.”

After Hill Lumber Company closed in the 1980s, Downard used the property on which the company sat to build a subdivision — which included five houses and a three-unit apartment building. She managed the property until 2009.

She also renovated several structures and oversaw those properties over the years — including 200 acres of farmland she did not manage but helped with projects and legal procedures.

“After earning this degree, Mom wants to know what’s next,” Alic e said.

That’s something to remember for people much younger than 92 who are far less active.