EDITOR’S NOTE: Mayor Graham, 71, was interviewed following the groundbreaking for a new Tim Hortons Cafe and Bakery and Reliance Bank near Green Mount Road and Interstate 64, perhaps the fastest-growing interchange in Metro East.

IBJ: You’ve been mayor 19 years. Do you have another term in you? 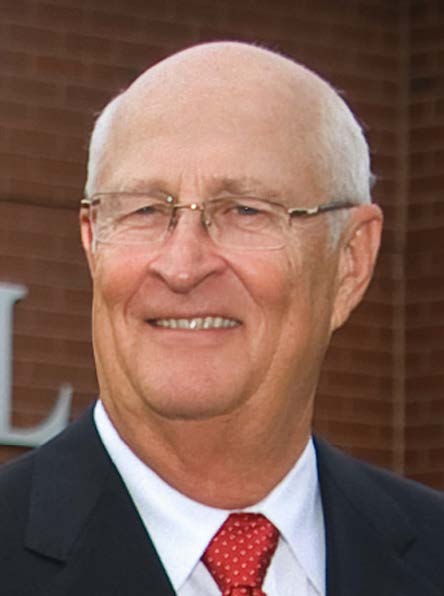 Graham: I probably do. I shouldn’t … but I love the city. I came here in 1989. In 1993, I ran for school board and the following year I ran for alderman. I was an alderman and a school board member (at the same time), then Illinois changed the law where you couldn’t be an elected official on both boards. So, I was on the council. It was highly dysfunctional, like many councils are. I spent a couple of years on the council and I decided to run for mayor. I’d only lived here eight years. That was very unusual coming into a 140-year-old town.
We didn’t take it over, but we did change it. It’s been a labor of love. We’ve gone from 15,000 to 32,000 people (during the tenure). People don’t know it but we’re the fourth or fifth housing market in the whole St. Louis area. In the state of Illinois, percentage wise, we’ve been one of the fastest (growing).

IBJ: What’s been the big reason for it?
Graham: The (Scott AFB) base has been a big driver. We export about 4,000 jobs a day to the base and to St. Louis. But I think it’s really three reasons. Number one, is the schools. If you don’t have good schools, people won’t bring families. If you don’t have families you have an old town, and if you don’t build rooftops you get no commercial.  It’s all about rooftops.
The second thing is amenities. One of the things I’ve done, along with the council, was add at least 330 acres of parks.  We have our master park (O’Fallon Family Sports Park along Venita Drive) with 15 soccer fields and championship baseball diamonds. And another 80 across the street to expand that park. Young families want amenities. Young families buy things, and you know about demographics — all the spending is done by people by the time they’re 50. What business wants to come to town when everybody is 70 years old? Our average age is 38 years old.
The third thing is police. If it’s safe, people are going to come — and we have that.
For people moving to the east side there are only a couple of places to look. I personally think it’s Glen Carbon/Edwardsville and O’Fallon/Shiloh.

IBJ: How did the Green Mount Road/I-64 development come about?

Graham: Green Mount was just a cow path — if I showed you pictures from years ago. We had a couple of developers, really smart, named (Darwin) Miles and (Darrell) Shelton. They bought the property where all the car dealers are (along I-64). In 1997, I committed to build Central Park Drive. I connected Hartman Lane with Green Mount Road. That gave all this frontage for businesses.
Someone bought one of the corners for housing and I convinced the city to buy it from him. If they built (housing) there, we would never get an interchange. I don’t remember the exact year, but Jerry Costello was congressman and we got the interchange built, and it was only one of two in the country built that year. Built with federal money and city money. And, today, this interchange has done more for (access for) Shiloh and Belleville than it has for the city of O’Fallon. But it’s about Metro East; it’s not just about O’Fallon.

IBJ: Your background in (barge, restaurant and other) businesses helps you strike a progressive tone when it comes to O’Fallon, doesn’t it?

Graham: Absolutely. You can’t get rid of all the red tape, but if you want people to come to town you don’t run them off. I will tell you I spent hours and hours training a staff that everybody is our customer. Government isn’t good about knowing who its customers are.  We have a terrific staff.

IBJ:  How much of a strain has it been on the town in general to have such rapid growth in such a short amount of time?

Graham: Well, it would depend on who you talk to. This is an amazing town, but there are only 500 or 600 original families here. When the base came in, they (the original families) thought they had lost their town. Many have been converted over the years, but that’s a difficult thing. At one time, if you were military, you couldn’t get elected in this town. Today, they know what a benefit they’ve got.
Many people think I’m a big spender, but we have a balanced budget and we have a surplus. We’re in the top 6 percent in the state in AA-plus bond rating. The city has assets of probably $300 million and we have $56 million or $57 million in debt. If that was your balance sheet in business, or your personal balance sheet, you’d like it. And I run it that way. We don’t run deficits.

IBJ: What does it mean to have two new hospitals, virtually neighbors, for a community like yours?

Graham: It does two things. First, this will be a lot of high-paying tech jobs. Plus, there’s the spinoff: We’ve had about 50 businesses come in the last year, especially since (HSHS St. Elizabeth’s Hospital) announced. They provide services. We have dialysis and blood places coming, we have a proton company that does imaging that is interested in setting up here. There are 350,000 people a year that are going to be visiting this hospital. That’s synergy.

IBJ: The NGA decision to locate in St. Louis instead of Scott AFB was obviously disappointing. It wasn’t just about jobs, was it?

Graham: We believe that half of them already work over here. You go over in the morning and you can see their vans that run to NGA from out here by the base. That isn’t the point. This is about national defense, not urban renewal. It’s about what’s best for the country. It was a political decision. The reports are now proving they weren’t right (in their decision making). You’ve got a premier group, the Corps, and they don’t even know what’s on the land yet. They don’t even own the land. It’s going to be double the cost to the taxpayers.
We were very disappointed when they said we didn’t have enough technical help. We’ve got more IT people than they know about.