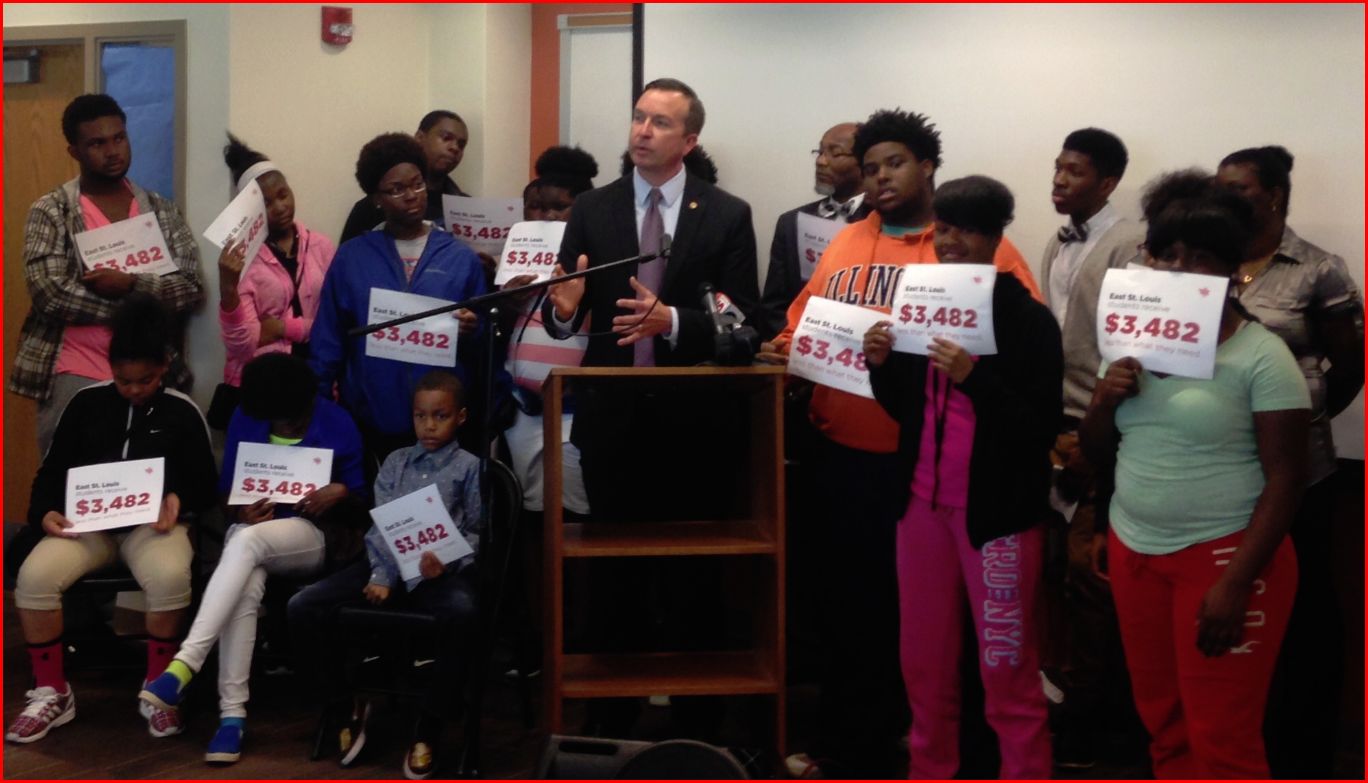 The current system, they said, has penalized students for decades by shortchanging property-poor districts throughout Illinois and cheating them of the high quality education they deserve.

Better Funding for Better Schools would ensure that districts with the greatest financial and student needs receive greater funding to provide the level of education and services required to help their students succeed.

The measure is pending in an Illinois Senate committee.

“We have an obligation to ensure that every child is afforded the very best education regardless of where they live or their financial circumstances,” Rogers said. “We know all too well that when we take dollars out of public education we end up investing in prisons on the back end. This cycle must come to an end. We need to stop creating districts of haves and have-nots where children are being penalized because they live in impoverished districts.”

They were joined by the bill’s sponsor, state Sen. Andy Manar, D-Bunker Hill.

“The state of Illinois values the kids of East St. Louis less than other kids in its laws and that needs to change,” Manar said.

“Our children have suffered for too long due to this inequitable formula and change is overdue,” said KeKeisha Beasley, an organizer with Parents United for Change, a local group of parents working to make East St. Louis a better place for children and families. Parents United for Change is part of Community Organizing & Family Issues, which supports 20 parent groups throughout the state. “Parents want equity. We want children in some of our toughest communities across the state to have the resources they need.”

“Right now, the odds are unfairly stacked against us” and urged legislators to “Show us that you believe in us. Honor our worth. Help us be the best we can be for our families, our communities and this state,” Holton said.

Supporters of the bill say Illinois has the most inequitable school funding system of any state in the entire nation.

Research shows that students living in poverty need additional resources in order to succeed. But, instead of giving them those resources, the state shortchanges students with the most need. This has created a system where wealthy districts in Illinois can spend as much as $30,000 per student, while the poorest barely spends $6,000, the bill’s supporters said.
The new approach to education funding in Illinois will reflect some key principles that will create a fair funding system for every child in Illinois, including getting resources to districts based on the needs of their students by driving more state dollars to districts that need support the most.
The bill takes into account a school district’s ability to support local schools with local funds and it would fund all districts the same way, which includes pension parity for Chicago, the only school district in Illinois that does not receive state support of pensions.