“This will be our largest ceremony ever,” Vice President of Enrollment Kent Scheffel said. “We will have approximately 270 students taking part in Commencement, and roughly 1,000 will be earning degrees or certificates.” 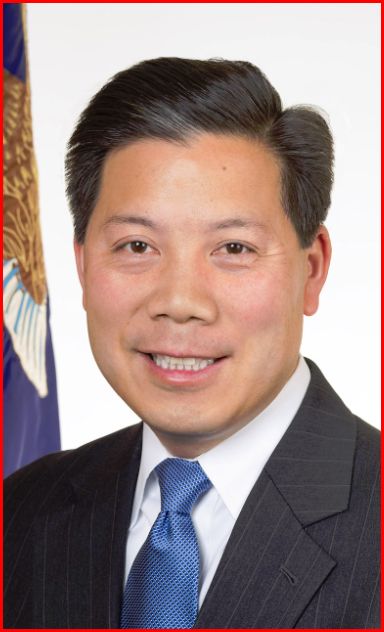 Lu (left), who was sworn into office in April 2014, serves as the chief operating officer of the 17,000-employee U.S. Department of Labor. From 2009-2013, he served as the White House cabinet secretary and assistant to President Barack Obama, making him the primary liaison to the federal departments and agencies helping to coordinate
policy and communications strategy.

“I can think of no one who has demonstrated a greater commitment to the future of community college graduates than our Commencement speaker, Deputy Secretary Christopher Lu,” said LCCC President Dale Chapman. “As deputy secretary for the Department of Labor, he gives vision to major workforce programs at Lewis and Clark and other community colleges throughout the nation, which are currently changing the lives of thousands of deserving students.”

During his career in public service, Lu has worked in all three branches of the federal
government. As one of the highest-ranking Asian Americans in the Obama Administration, Lu was also the co-chair of the White House Initiative on Asian Americans and Pacific Islanders.

Prior to his service in the White House, Lu worked for then-Sen. Obama, first as the
legislative director, and then as the acting chief of staff. After the 2008 Presidential election, Lu was the executive director of the Presidential transition planning efforts.
Lu’s government experience includes eight years working for Rep. Henry Waxman as the deputy chief counsel of the House Oversight and Government Reform Committee, and serving as a law clerk for Judge Robert E. Cowen on the U.S. Court of Appeals for the Third Circuit. He began his legal career as a litigation attorney at Sidley Austin in Washington, D.C.

In addition to his government service, Lu has been a fellow at the Georgetown University

McCourt School of Public Policy, the University of Chicago Institute of Politics, and the
Center for the Study of the Presidency and Congress. He is also the co-editor of the book, “Triumphs and Tragedies of the Modern Congress.”

“It’s truly an honor for me to address the Lewis and Clark graduates and share some personal insights on the world they’re about to enter,” Lu said.