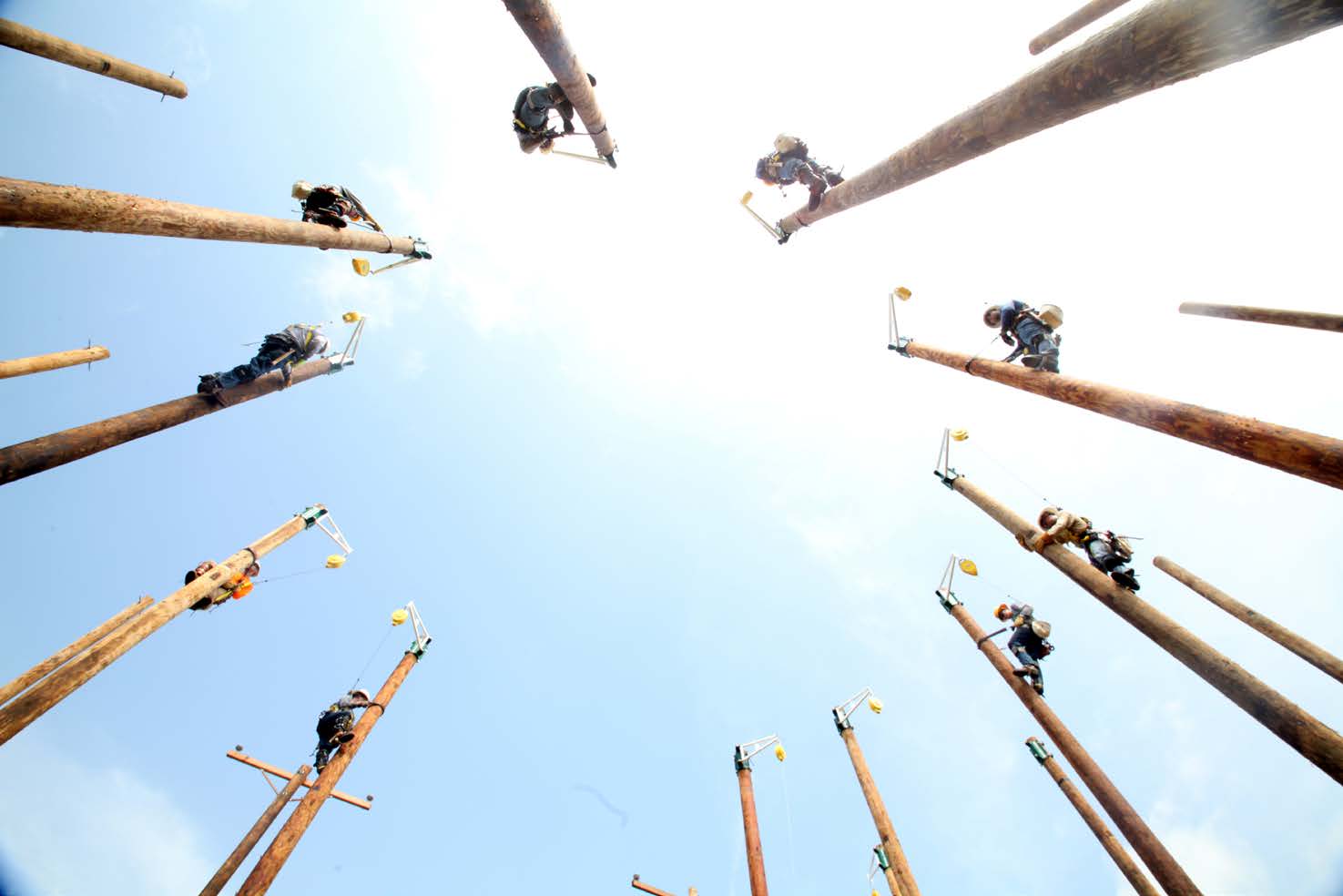 Rookie employees and seasoned linemen are among those passing through Ameren Illinois’ Metro East Training Center along Illinois Route 15. For some it’s more of a learning experience than others.
“A lot of our folks are used to doing it the way they’ve done it for years. And the smart grid technology is different,” said Marvin Morey, manager of Electric Training & Quality Assurance. “It’s new — and not everybody accepts change well. But as we get our training across to them, they are accepting of why we are doing it and the theory behind it.”
Smart technology is being installed across the service area to modernize how the electric and natural gas utility distributes power and to make things more efficient for customers and the company. New substations, sensors, switches and —to a lesser degree in Metro East — smart meters are all part of the program.
It’s a new era for journeyman crewmembers, and apprentice trainees are arriving right in the thick of it.
Ameren Illinois has added 191 employees in the Metro East since 2012. Overall, across its service territory, it has  added more than 800 employees. The company employs 3,000 in Illinois.
In part, Ameren Illinois is keeping up with the times. Baby Boomers are retiring in droves, and the utility business is part of it.
“In our industry a lot of workers are at or near the age of retirement. We’re bringing on new people so they can learn from the older people,” Morey said.
Since 2012 in the Metro East, Ameren Illinois has added 59 smart switches to its power lines and 20 sensors in substations, with more to come this year. The new generation of automated and remotely controllable devices can determine appropriate switching actions to reduce the number of customers affected by an outage and work to restore power quickly, spokesman Brian Bretsch said.
“We had an outage last year caused by lightning impacting 1,700 customers. Switches and sensors restored power to a majority of customers within seconds rather hours,” he said. “The first switch detected the loss voltage and initiated an automatic transfer of power by opening and closing a second switch. Within seconds, 1,100 customers were back on. We isolated the impacted area and used an automated switch on the system to restore the remaining 600 customers.”
Metro East is still waiting on the latest generation of smart meters. The closest such equipment is being installed in places like Hillsboro and Sparta, they said. Those are being evaluated before a wider rollout occurs. Most smart meter training is done in Ameren Illinois’ Decatur operations.
“Overall (in Illinois), we have installed 250,000 electric meters and 110,000 natural gas meters,” Bretsch said.
For Ameren Illinois, it’s the greatest modernization of its electric and natural gas grids in almost 50 years, a multi-billion investment over 10 years.
“In addition to the automated and smart technology we are adding to the electric grid, we are storm hardening the electric delivery system. Our crews are installing stronger poles to withstand storms, resizing transformers to meet future capacity needs for customers, and are constructing new overhead and underground lines,” Bretsch said.  “On the natural gas side of our business, we continue to invest in stronger, corrosion-resistant distribution pipes.”

Ameren Illinois officials took the Illinois Business Journal on a tour of the Belleville training center to get a taste of what workers are seeing. That day, a group of linemen were going through transformer training.
About 20 classes a year are taking place, most of them two-week classes, with about 10 to 15 people in each class.
“We’ve added a week of transformer training  to all of our line training classes, so at a minimum they are three weeks every time they come,” Morey said.
“We also have refresher training for our experienced employees for new technology —  on IntelliRupters, things like that,” said Craig Gilson, senior director, Division Operations North. An IntelliRupter is an oil or vacuum switch designed to carry a switchload. If it sees a temporary or partial outage, it will understand that it has to close or allow re-energizing of a line; or to switch the load to other lines.
The IntelliRupters sense where a fault is occurring and limit the amount of lineage that must be shut down for repairs.  IntelliRupters hang on the pole under the crossarm. They can “talk” to similar substation sensors, called vipers, that can relay vital information to Ameren dispatchers, warning them about load and power requirements.
The automation helps speed the repair process by narrowing the search area.
“In the old days, if a tree limb would fall down, the guys would have to walk the length of the outage to determine the area of break. We use to call this walking the line,” Gilson said.
At the training center, “we’ll show how it’s all set up, how it’s programmed, how it’s operated, the safeguards that are involved when you’re going to disengage the system. We’ll talk about the theory and try to answer any question they might have,” Gilson said.
The center was opened in 2014. Apprenticeship training is for 36 months.
“They go four steps on the line side. Each step they have to have 1,500 on-the-job training hours, plus nine months of work. Every six months, each class will come back for a three-week period. They do that through their three years. Each time we keep advancing their training,” Morey said.
“At the first class they will learn some basics. Then they’ll go out  in the field and practice those basics with their crews. The next class will advance them up to the next level — secondary voltages. Each time they come in we give them a little bit more training.”
The “basics” would entail framing poles, flagger training, climbing, digging holes, digging trenches by hand and essentially being a ground man for the guys in the air dealing with the hot wires.
The training center has everything a utility worker could need, from a field of telephone poles to a “lab” to simulate running controls for substations. Included are reduced-voltage transformers  — something like what you’d see high in the air but in this case at ground level so instructors can better explain things.
The center is based in an 18-acre former lumberyard, with plenty of space for training both indoors and out.
Two miniature “houses” are on the grounds, used for gas leak training and meter installations.
The new technology and the appeal of a good job with benefits is drawing apprentices.
“You’ve got guys coming in now with two- and four-year degrees who want to be linemen. They get technology. Teaching the new dogs the new tricks. They don’t miss a beat,” Bretsch said.
A college degree is not necessary. Several future journeymen are signing on right out of high school or out of the military.
Others are workers who have been employed in other fields for many years.
Romero Taylor, a 45-year-old apprentice lineman who works out of the East St. Louis Operating Center, reflects many of the next generation of Ameren Illinois workers. He was a carpenter for 21 years before he was tempted by a job with good benefits.
“I had a friend of mine who got hired on and he was telling me about all the good stuff,” said Taylor, of Centreville. “No layoffs, paid holidays, good benefits, everybody treats you nice. Once you get hired in, if you want to explore other avenues (in the company) the world is open to you. Just get your foot in the door and go where you want to go.”
He’s one of the older apprentices — most of whom are in their 20s.
“They give it to me pretty good,” he said of the younger guys, “but I can’t say anything bad.”
Right now he’s concentrating on his three-year apprenticeship. He’s about halfway through and recounted how he’s learned the mechanical part of the job in night classes while applying the physical part of it out in the field  — in all conditions.
“We work in everything except lightning,” he said.
As an apprentice, he must have a journeyman alongside whenever he’s working a hot spot.
While more classes have taken place in the training center than were originally predicted, Gilson said he believes the peak hiring period was last year.
“Now, the new hires are more attrition and preparing for the future,” he said.
Ameren’s completed several recent projects:
– A new Shiloh substation to support the new Memorial Hospital and surrounding customers in O’Fallon/Shiloh. That was a two-year project finished in late 2015.
– A new Canteen substation between Collinsville and Troy.
– A natural gas pipeline enhancement near Gateway Motorsports Park benefiting customers in Madison and East St. Louis. The larger pipe can handle increased capacity in the future.
Before the year is over it will begin building a new Katherine Dunham substation at the intersection of Cleveland and 27th Street in East St. Louis. That works starts in April.
Later this summer, the company plans to break ground on a new operating center to replace an existing one in East St. Louis.