Monroe County followed suit and also sold the highest number of homes this past February over the last five Februarys. Realtors in this county sold 39 percent more homes in February 2016 compared to February 2015.

In that same comparison, Clinton County reported an 18 percent increase in home sales.

“Strong momentum continued in the housing market in February,” states Doug Payne, president of the Realtor Association of Southwestern Illinois. “The mild winter and robust buyer demand have helped drive the Metro East and Illinois housing market right now. These positive factors coupled with the continuation of low interest rates provide a great time for current homeowners to think about moving up, listing their homes for sale and tapping into pent-up buyer demand. Now is a great time to buy or sell.”

According to a recent survey done by the National Association of Realtors, called the NAR Housing Opportunities and Market Experience (HOME) Survey, 75 percent of people believe now is a good time to buy. This percentage rate climbs to 80 percent in the Midwest, according to the first quarter HOME survey. 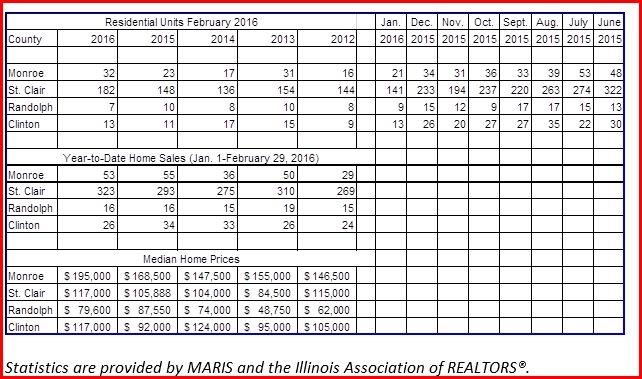