EDWARDSVILLE – Ask Bill Alexander about the highlights of his long career in banking, and his response is quick and pointed.

“It’s all about the people and the relationships you make,” he said. “It’s not about titles or positions or even the money you earn … It’s about the lifelong relationships you develop with people. I have truly relished the opportunity to develop those relationships, to serve people, and most importantly, to help people.”

Alexander has helped many throughout his banking career, which reached its golden anniversary in October of 2015. He was honored for his 50 years of service by Illinois Bankers Association President Linda Koch at TheBANK of Edwardsville’s Annual Stockholders’ Meeting on Tuesday, March 22.

“It’s been a wonderful journey,” Alexander said. “I feel so blessed to have the ability to work and serve the people of my hometown for so many years. And that’s been a big benefit to me over the years. Even though it’s grown so much, Edwardsville has always had that small town feel, which has made it easy to make strong, lasting relationships.”

A near lifelong resident of Edwardsville after his family moved to the town when he was three years old, Alexander began his career in banking in October 1965, at Edwardsville National Bank and Trust Company as a trainee in the loan department. Over the next 10 years, he progressed rapidly at Edwardsville National. He learned the ropes of operations, auditing and virtually every other department at the bank before eventually being named vice president and cashier, which at the time was the top operations position at the bank. Through that time, he also developed relationships with the employees at the other bank in town – TheBANK of Edwardsville – including then-cashier Bob Wetzel, who would later become the longest-serving president in TheBANK’s history. 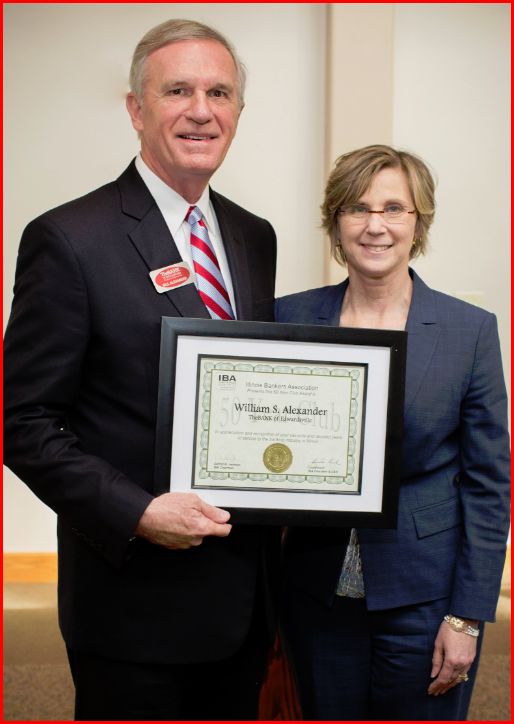 “Both banks were about the same size at that time, and there was a lot of cooperation between the two,” Alexander said. “Bob and I had a great friendship that went beyond banking. Both banks only had roughly 40 employees, so we all knew each other.”

Those relationships would play a big part in Alexander joining TheBANK.

In 1975, Edwardsville National was bought by out-of-town interests as an investment opportunity, and Alexander, who has always been strongly committed to community banking, saw the writing on the wall. So when Wetzel, and then president of TheBANK John Hunter, approached him about joining TheBANK, Alexander took the opportunity. He started his career at TheBANK in January, 1976, as a vice president.

Over the next 40 years, Alexander played a pivotal role in the management of TheBANK’s growth as a vice president, senior vice president and his current title, executive vice president. He even served as interim president of TheBANK following Wetzel’s retirement in 2004. The position was offered to him on a full-term basis, but he declined due to his retirement plans at the time. However, he helped lead the search that brought Tom Holloway to TheBANK as president, ushering in an era of expansion for the organization.

In addition to his role in management decisions regarding the day-to-day operations of TheBANK, Alexander has also been a key player in its long-term decision making as a member of its board of directors, as well as a member of the board of directors of its holding company, THE BANC ED CORP., since its inception. He currently serves as president of THE BANC ED CORP. board.

Alexander has also played a big part in helping build TheBANK’s unmatched reputation for community service. He has served charitable, civic and educational organizations at the local, state and national levels – as well as serving his country for a six-year stint in the United States Air Force Reserves as an aeromedical technician during the Vietnam Conflict, where he reached the rank of Staff Sergeant. He has been a near lifelong member and supporter of Trinity Lutheran Church and School, was named a “Paul Harris Fellow” by the Edwardsville Rotary Club, and earned the “Distinguished Service Award” from the Edwardsville Jaycees in 1976.

Alexander’s long list of service to local boards features the Edwardsville Chamber of Commerce, YMCA, and American Cancer Society chapter; the city’s Police Pension Board and Mobile Intensive Care Unit; the Illinois Bankers Association, the Southwestern Illinois Chapter of the Bank Administration Institute, and the Graduate School of Banking, University of Wisconsin; and Lutheran Child and Family Services of Illinois. While serving on the state board of directors for Lutheran Child and Family Services, he was instrumental in the development and opening of the Meridian Village Retirement Community in Glen Carbon, and served as its chairman of the board in its early years until it merged with Lutheran Senior Services.

While his list of accomplishments and service is long, Alexander is quick to point out that both his work at TheBANK and his work in the community have not been solo efforts.

“I take a tremendous amount of pride in the work we’ve been able to accomplish in the growth of the communities and the growth of TheBANK,” he said. “I also owe a tremendous thank you to my fellow employees, both past and present, for being such a great group of individuals to work with. They have been and continue to be committed to making this organization and our communities successful.”

He paused, and added, smiling, “I just started a little sooner and have lasted a little longer than most.”