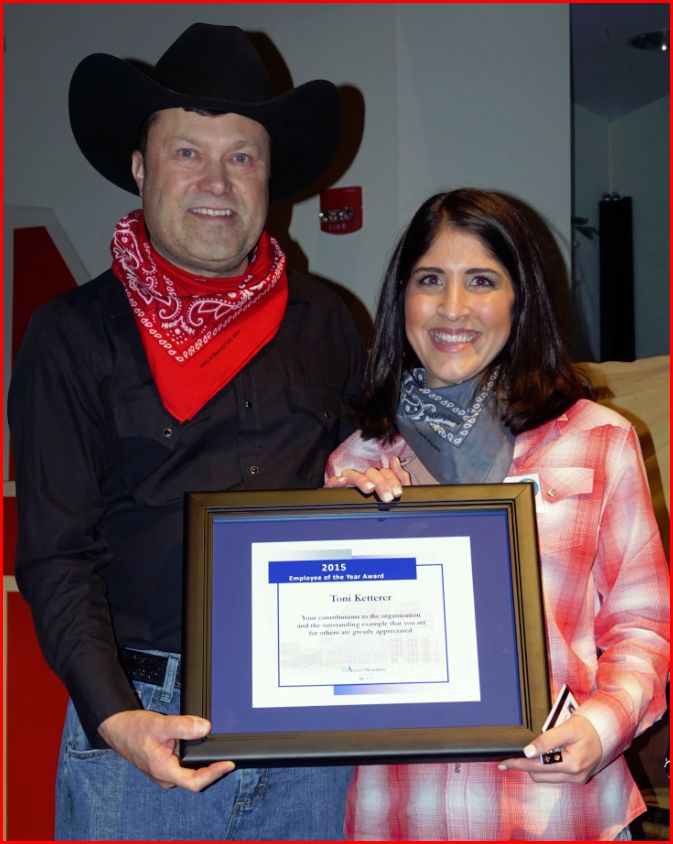 More than 250 people filled the room for a night featuring the “Back in the Saddle” band, square dancing from the Wheelers & Dealers, a photo booth, a horseshoe pit, and enough cowboys and cowgirls for a cattle drive.

The Employee of the Year award went to Toni Ketterer of the Nursing Float Pool. Rusty Ingram, director of Business Development, was presented with the Leadership Award.

Ketterer was one of the 12 Employees of the Month from 2015 honored at the banquet, and leadership chose her as the Employee of the Year. She was nominated for the award by no fewer than 15 co-workers, who said that Toni “is always going above and beyond to help others, no matter what department she is in. Patients always love her and compliment her. Toni is always staying over to help the next shift when there is not enough coverage. She is very kind and compassionate towards patients, and is a real team player.”

Supervisors, managers and directors are eligible for the Leadership Award. Ingram has been with Alton Memorial for eight years and oversees Marketing and Public Relations, as well as Business Development, which includes physician recruiting.

“Rusty has never met a stranger,” said AMH President Dave Braasch. “He seems to be everywhere all the time, always getting something done. He has a smile that encourages everyone that better times are around the corner, even when the day doesn’t seem to be going quite right. Physicians, managers, staff and community leaders alike see Alton Memorial Hospital at its best when they see Rusty. He displays great integrity, commitment and a propensity for hard work. And that hard work gets results.”

“In 2013, we showed a house-wide CAUTI rate of 3.2 percent, which represented seven infections at Alton Memorial, “said Turpin, vice president of Patient Care Services. “The benchmark was not to exceed 1 percent. The team was identified in 2014 and the hospital joined the national ‘On the CUSP: Stop CAUTI – Cohort 7’ CUSP program.”

CUSP is Comprehensive Unit-based Safety Program to Eliminate Health Care-associated Infections. By the end of 2014, in conjunction with the Education Advisory Committee, education was provided to all the nursing staff on proper catheter insertion techniques and maintenance.

“The outcome, to date, is that there have been no catheter-associated urinary tract infections at Alton Memorial since October 2014,” Turpin said. “This is a major accomplishment and everyone should be proud of their efforts.”

“Each day we strive to meet and exceed the expectations of the people who have entrusted us with their care,” said Braasch. “This banquet is an opportunity to celebrate our accomplishments. We care for people during some of the best and worst times of their lives. We want to say ‘thank you’ to all of our excellent employees. Collectively, we are Alton Memorial Hospital – and that’s something of which to be proud.”