By DENNIS GRUBAUGH
ALTON — If Kristy Hettenhausen had her way, 9-to-5 Americans would mix a little “Hokey Pokey” in with their desk-bound-day’s routine.
In her world, “putting your left foot in and shaking it all about” can only help the working body, especially when it’s glued to a chair most of the day.
“Our bodies were meant to move,” she said.
Hettenhausen, who with her husband John owns ApexNetwork Physical Therapy locations in Bethalto and Wood River, spoke last month to a group of around 40 nicely dressed business professionals at a RiverBend Growth Association networking breakfast. Little did the attendees know that they would be put to the physical test.
For 10 minutes, Hettenhausen, an occupational therapist, had her audience standing, sitting, stretching and limbering while mimicking exercises they could do at their desk during the workday. By the time they were all done, participants professed to be loosened up, although a few snaps and crackles could be heard around the room.
The presentation was called “Deskercise,” and it was well received by the group members, most of whom could relate to the message of movement.
ApexNetwork has preventative injury programs that therapists take into the workplace, showing employees how important it is to work exercise into work. The message isn’t limited to the desk set. Anyone who deals with repetitive motion or lack of motion can benefit.
“We also do job analysis to make sure people are doing their jobs in the safest way possible, using the correct body mechanics, etc.,” Hettenhausen said.
Many injuries occur because workers are seated in the wrong position, she said.
“We are all human beings,” she said. “Everything we do, we do with our work in front of ourselves, with our heads down. Generally we don’t pay attention to where our hips are, where our knees are, where our ankles are. It’s very common to see neck injuries, back pain, possibly hip pain. Look first at body mechanics to see if you’re at risk of anything.”
Here are some of her tips:
– Make sure your neck is not in a “rough position” (like holding a phone under your ear while talking and typing, or having a computer terminal at an awkward position for reading).
– Sit in your chair, using the “rule of 90” degrees. Square up your hips. Keep your back upright against your chair back for lumbar support. Keep your keyboard in a squared-off position in comparison to your arms. Keep your knees at 90 degrees or greater.
– Don’t stay in a position for a long period of time. Take micro breaks or micro “stretches,” either scheduled or when you can fit them in.
“A lot of places we work with, they make their people get up at 10 and 2, but most of the time it’s going to be up to you,” Hettenhausen said.
During her audience workout, she showed basic stretches that can keep the circulation flowing in the upper, middle and lower portions of the body.
People were asked to slowly turn or tilt their neck left and right. Then they were asked to roll their shoulders in a shrugging motion. Then they alternated reaching arms across their body to stretch their back, shoulders and pectoral muscles.
If such activity hurts, don’t do it, Hettenhausen cautioned.
“Listen to your body; your body will tell you what’s best,” she said.
She asked audience members to extend an arm, palm up, then down. People then used their opposite hand to apply pressure to the extended hand. Such motion limbers up those parts that are overworked at a keyboard.
She also suggested hamstring stretches in which a sitting person can extend a leg straight out and then reach increasingly toward their toes. That’s a method of fighting tightness of your lower back
How one sits at a desk is critically important to their comfort. Many systems are designed ergonomically. Blue tooth headsets and phone speakers are good ways to keep from contorting yourself.
“We put ourselves into this world of technology, then we put ourselves into the worst anatomical positions ever. Look at what you’re doing and think about a couple of little things that can help you,” she said.
Women tend to hold their stress in their necks; men tend to hold it in their lower backs. And circulation is a big deal. She suggested a type of 60-second workout during work respites.
“If you’re waiting on something and you’ve got enough room in a cubicle or office, do 60 seconds of jumping jacks or pretend you’re jumping rope. Joking, but not joking,” she said to the audience’s laughter.
The basic rules are stand vs. sit and walk vs. stand. But you can also take stairs vs. the elevator. Or park farther away and force yourself to walk. Or do lunch break exercises.
Even just squirming in your seat helps.
“People who fidget in their seat burn more calories than if they just sit there,” she said.
Apex has more than 40 locations in Illinois and Missouri. Kristy Hettenhausen can be reached at khettenhausen@apexnetworkpt.com 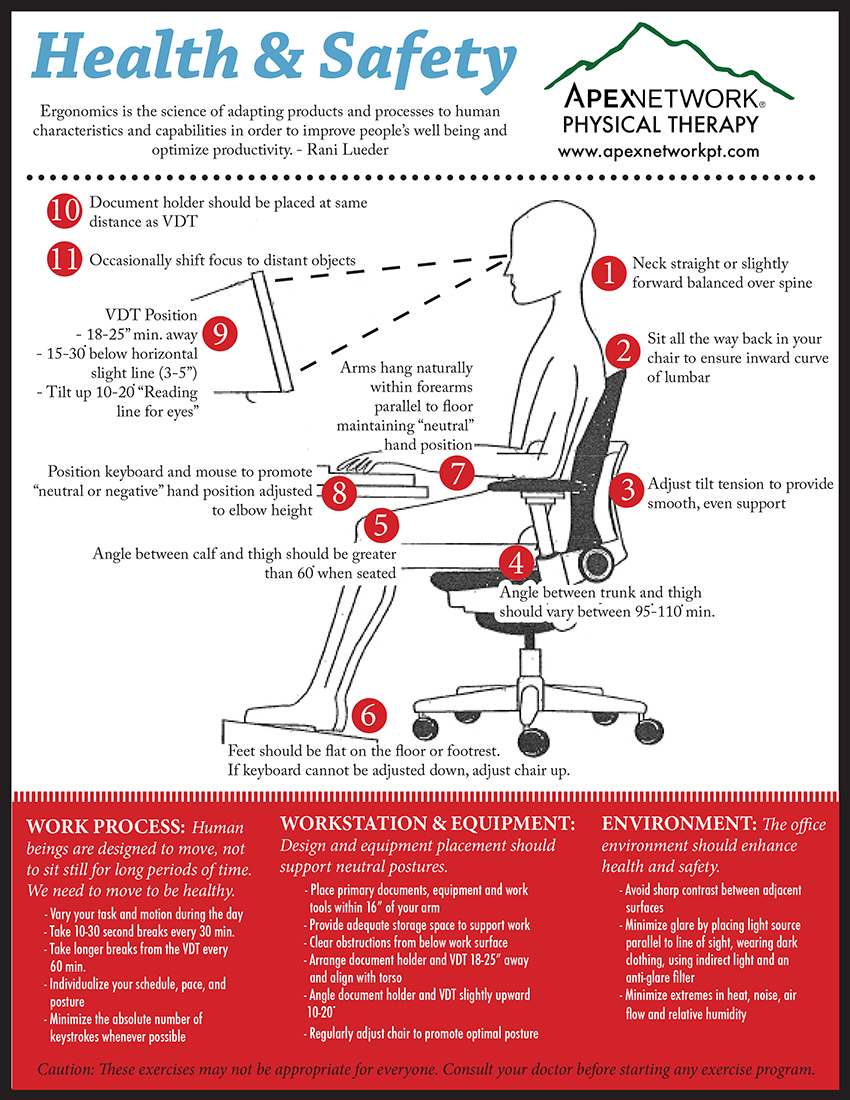