The University of Illinois is a founding partner of Lewis and Clark Community College’s Mannie Jackson Center for the Humanities, along with SIUE, where the sold-out dinner is being hosted. 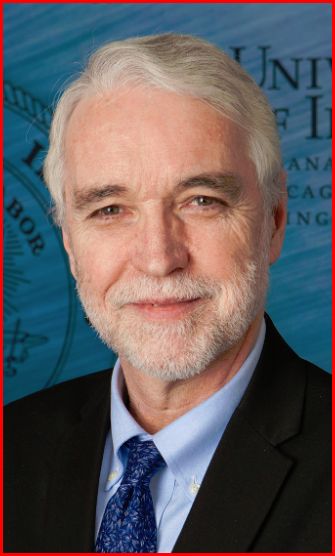 The collaboration of these three distinguished higher education institutions, along with Gen. Colin Powell as the inaugural guest speaker to launch the humanities center’s Speaker Series, represents the quality and caliber of programming to be expected from the center, according to LCCC President Dale Chapman, who is also a member of the foundation board.

“It is inspirational that someone of Mannie Jackson’s stature – with his business, athletic and social acumen – would commit to a world class humanities center dedicated to using the humanities as a roadmap for what it means to be a 21st century American in an increasingly pluralistic society,” Killeen (left) said. “It is an initiative the University of Illinois is proud to be a part of.”

Chapman said Killeen’s presence at the event speaks volumes about the commitment the University of Illinois places on this collaboration with LCCC and SIUE.

“With these strategic partners, the MJCH will develop the intellectual tools and perform the research necessary to empower communities around the world to solve conflict using the center’s core values of respect, dignity, understanding and forgiveness,” Chapman said.

With Killeen’s background as a leading researcher in geophysics and space sciences, and the University of Illinois’ status as a top tier research institution, the partnership represents the confluence of environmental sciences research and the human dimension as it pertains to the mission of the humanities center.

“The MJCH, as a worldwide Center of Excellence, will perform the research necessary to facilitate the development of the next generation of change-agents who will learn to transform their communities effectively, without violence and destruction,” Chapman said. “This partnership is ideal for providing intellectual leadership in the center’s early years, and for engaging policy makers and researchers at the highest levels.”

LCCC and the University of Illinois have a long-standing working relationship and respect forged during the development of the National Great Rivers Research and Education Center, which focuses on the study of the ecology of the big rivers, the workings of the watersheds that feed them, and the ties to the river communities that use them.

“There is excitement about the seamless relationship between these areas of emphasis – human dimensions and freshwater research – which are high priorities of the university,” Killeen said. “We see this vision as both unique and powerful.”

“One of the top research priorities of the MJCH plays on the strengths already established between these two great institutions,” said Mannie Jackson, namesake for the center and president of the MJCHF Board of Directors. “The MJCH will directly focus on bridging information gaps and applying results of what is currently known, in addition to what is learned, directly through these research projects, to seek positive, scientifically based solutions to current issues and problems.”

Beginning in Fall 2016, research projects at the center will delve into the human dimension of environmental issues using scientists at Lewis and Clark’s NGRREC, the University of Illinois, SIUE and other academic institutions throughout the world, as well as the public and private sectors, non-governmental organizations and government organizations, etc.

Projects will examine the political, ethical and moral humanities issues through researching the association between people and the environment related to poverty, housing, immigration, education, income disparity and social class, crime, urban planning, health, food and water and more.

Killeen, who became the 20th president of the University of Illinois system in May 2015, said the university is enthusiastic about this collaboration. An award-winning researcher, his resume includes work with the State University of New York, National Science Foundation, University of Colorado, the National Center for Atmospheric Research, and the University of Michigan. His full bio can be found at www.uillinois.edu/20thPresident.

The MJCHF is a 501(c)(3) organization, which supports the Mannie Jackson Center for the Humanities, a division of Lewis and Clark Community College. Learn more at www.mjchf.org.