MADISON — A project long in the making took a significant step Wednesday with the loading of the first barge at the Madison Harbor, formerly known as the South Harbor, at America’s Central Port.

John Hamm III, mayor of Madison, and chairman of the port district’s board of commissioners, said the barge was loaded with dry distillers grains, known as DDGs, from the neighboring Abengoa Bioenergy ethanol plant. DDGs are a byproduct of the ethanol-making process and serve as high-protein animal feed.

“This is a great day for the city of Madison and America’s Central Port,” said Hamm. “We put a lot of work into making this happen and it is wonderful to see the dream become a reality.” 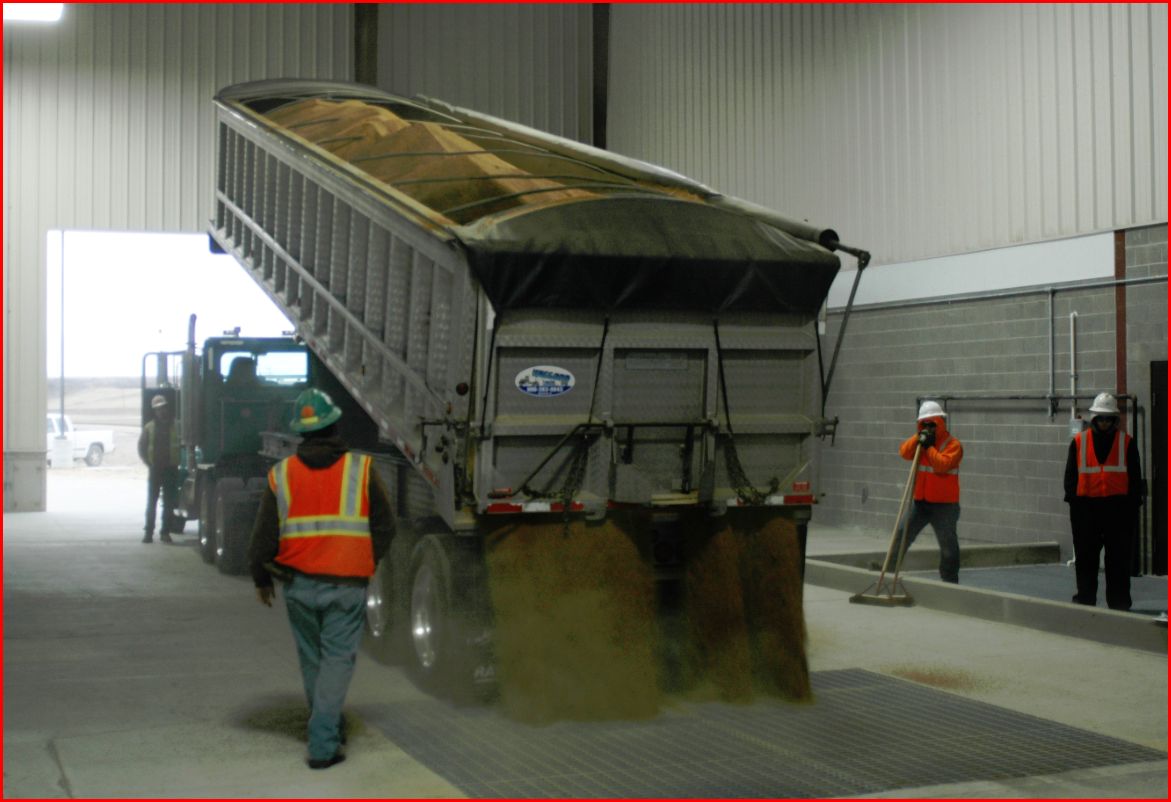 The loading of the first-ever river barge at the harbor also served to test all of the conveyors and equipment at the terminal building that receives trucks and rail cars filled with grain or DDGs. The terminal operator’s employees spent some time getting familiar with all of the new switches, conveyors and electronics, and the whole barge load-out process went smoothly.

The terminal building is located on the landside, or the protected side, of the levee. The terminal receives the dry bulk materials from trucks and rail cars that are then unloaded into underground pits. A series of conveyors then moves the grain from the pits over the levee to the Madison Harbor where it is loaded into barges through a long spout.

“We moved seven trucks and 18 rail cars through the terminal building to load the barge,” said Hamm. “We were able to work out the kinks in the system and are now ready to begin moving unit trains of grain or other dry bulk commodities. The full barge will now move downriver with other loaded barges for eventual reloading to an ocean-going ship.”

Construction on the Madison Harbor began in 2010 with installation of 10 levee relief wells and approximately 9,600 feet of rail track that serves as a loop to keep the rail cars in one unit. Then over one million cubic yards of material was excavated on the river bank to create an inset harbor. Installation of a general cargo dock, deck barges, mooring cells, heavy-haul concrete roads and site lighting completed most of the construction, with the terminal and conveyors being completed this week.

Following a severe drought in 2012, and several floods and high-water events since then, the Harbor and terminal were dedicated in early October 2015 knowing that the construction would be complete sometime this winter. Total construction time of the terminal portion of the project took approximately 15 months. The flood in late December and early January pushed back the test run by about 30 days. Now, the contractors are finalizing last-minute details and will be pulling off the job site shortly.

Construction was also finalized this week on the Madison boat house that is located in the Madison Harbor. The boat house was built upriver and floated into place late last fall. Final connections and tie-ins for access and operations were completed this week. The boat house is a two-slip floating garage that holds the Madison fire boat in place and out of the weather for emergency river response, as well as a second slip for a future water craft. A federal grant paid to the city of Madison allowed the purchase of the fire boat several years ago.

“The city of Madison and our fire department can now respond quickly to any river emergency issue”, said Hamm. “Being located in the Madison Harbor gives us very quick access to the St. Louis riverfront and cities further south. We are definitely excited about our capabilities now and on a going-forward basis in Madison.”