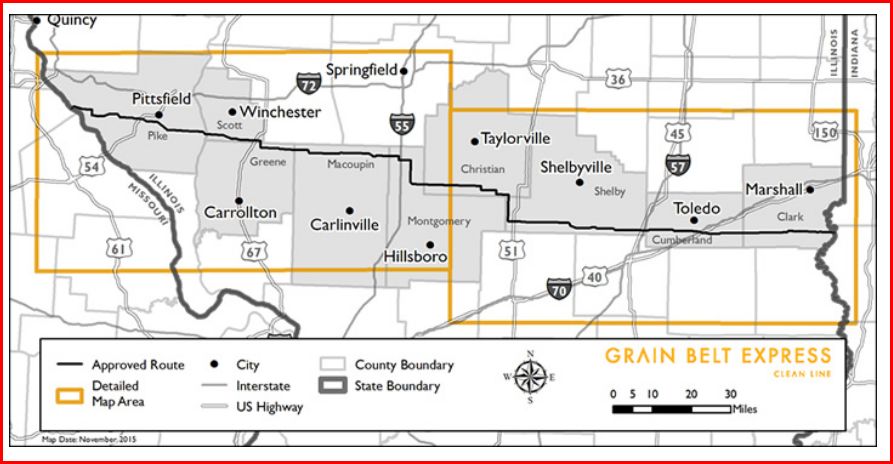 The jagged black line through the center of the map shows the project’s proposed path across Illinois.

SPRINGFIELD – State Sen. Kyle McCarter says he is sticking up for private property rights of Illinois citizens by urging state and federal courts to reject any request for eminent domain authority from the corporation behind the Grain Belt Express Clean Line power project.

The 54th District senator also expressed concerned about the partial ‘green light’ given to the project by the Illinois Commerce Commission.

“There are two big issues here,” said McCarter. “The first is that eminent domain actions, which result in the taking of private property, are supposed to be reserved for projects with a public interest or a public good. The second issue is the involvement of the ICC regulating the transmission line project.”

The corporation behind the Grain Belt Express, Clean Line Energy Partners, is a group of investors that want to build transmission lines across privately-owned land in Illinois to carry wind-generated electrical power from western states.

“The ICC should reconsider their decision giving the project a designation as a ‘public convenience and necessity,’” said McCarter. “That puts eminent domain in the bag of possible legal tricks, even though the transmission lines provide no benefit to Illinois or its citizens. Eminent domain is supposedly reserved for what’s in the best interest of the public good,” said McCarter.

Under eminent domain, private property owners are supposed to receive fair compensation for property that is taken, but McCarter said he is concerned that landowners may get less-than-ideal offers because of legal pressure.

“This law makes sure the correct landowners are notified ahead of time so that they can seek appropriate legal counsel,” said McCarter. “It also requires the transmission line company to notify the landowner when a land survey is conducted on a person’s property after the ICC certificate is issued. However, while this protection is in place – as far as notification is concerned – the use of eminent domain is a big disadvantage to landowners.”

McCarter said when it comes to providing electrical power, he’d like to see more attention paid to real energy generation in Illinois.

“If the ICC is going to take actions to benefit energy generation, it should be about promoting and expanding the use of Illinois coal,” said McCarter. “To make it easy for wind power to blow through this state and not benefit the state of Illinois, this project should be low on our priority list,” he said.

Similar to the trains that carry grain harvested in the Midwest to market, the Grain Belt Express Clean Line will move wind energy from its source in the grain belt of the country to markets with a strong demand for low-cost, clean power.

The company is working to secure the final regulatory approvals needed for the project. Construction could begin as early as 2017.