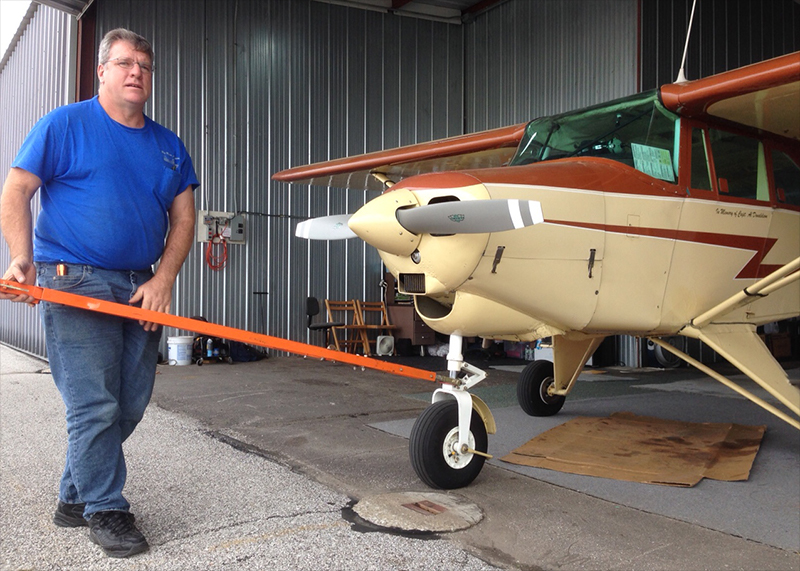 By DENNIS GRUBAUGH
EAST ALTON — Big River Aviation is starting small at St. Louis Regional Airport, but the company’s on a flight path to greater heights.
Owner Paul Voorhees is working out of three tiny t-hangers, temporary space as he pursues plans to either lease or build bigger hangar space on the airport grounds.
He is starting a flight instruction school as well as building up his existing small-aircraft repair shop — both of  which fit the needs of the airport. After 30 years as an aircraft mechanic, Voorhees has his own customers but also anticipates some spillover work from the airport’s major tenant, West Star Aviation, which specializes in larger-aircraft repairs.
The airport has not had a flight school since the closing of Langa Air in 2009.
Voorhees, 49, opened his new maintenance shop in September.
“He’s had airplanes flowing through there ever since he’s been here,” Regional Manager Dave Miller said.
Voorhees is well-known in the air community in Missouri and Illinois where he serves as an instructor. He has been an airplane mechanic since 1986 — starting with his days in the U.S. Marine Corps.
“I started Big River Aviation in  2008 and worked out of the cab of my truck. I would drive from airport to airport and do a mobile service.” At the same time he had a full-time job running the A&P School for St. Louis Public Schools, one of only four high schools in the country with FAA-certification authority.
He’s a rare breed, a mechanic who’s also a pilot and an instructor. He got his flying certificate in 1990.
His credentials are spelled out on his business card, which lists him as an “A&P” (a mechanic certified by the Federal Aviation Administration to work on both airframe and power plant); an  “IA” (an inspection authority, also sanctioned by the FAA); and a pilot.

While in the Corps, he worked on fighter jets. Since then, he’s worked on almost every kind of plane, down to the smallest component. He does annual inspections, refurbishments, scheduled and unscheduled maintenance and complete rebuilds. One of his specialties is “prepurchase evaluations,” many of them of planes that potential owners want to buy through Internet purchases. He’ll fly to wherever the plane is and report back his findings.
For a couple of years, he ran the Air Combat Museum in Springfield, where World War II craft are restored. He was in charge of restoring the antiques. He and his wife Paula live in south St. Louis County, and all the while, he was commuting by plane from St. Louis Downtown Airport in Cahokia to the museum in Springfield — 220 miles round trip.
He’d still be flying to Springfield if it wasn’t for the inconvenience and his desire to be his own boss.
“I was looking to establish my own business. I flew over this airport almost every day. I’d look down and see a wonderful, and underutilized facility,” Voorhees said. After looking at several alternatives in the region, a  mutual friend, former Parks Airport boss Bob McDaniel, hooked him up with Dave Miller at Regional. After that, he knew he’d found his work home.
There are many challenges in airplane repairs, but the one thing that still stumps him is intermittent electrical problems. When that happens he calls his good friend, Dr. Paul Greenwood, who used to run the Southwestern Illinois College A&P School. His specialty was aviation electronics.
“He’s the one who got me into education,” Voorhees said. “When I was doing all that flying to Springfield, he said,  ‘You need to come to work for the college.’ To this day I’m a part-time instructor at SWIC in Granite City.”
He’s also a part-time instructor for the aerospace program at St. Louis Community College, though it’s partnership with St. Louis Public Schools, where Voorhees was the full-time A&P instructor. He’s also on the Aviation Department Advisory Committee at SWIC, a college that has no airplanes but trains students on simulators before they go elsewhere for actual aerial training.
Big River is the center of his focus these days. Voorhees’ short-term plans hinge on pending negotiations, but if existing hangar space turns out not to be available he has plans to build a new hangar just north of the St. Louis Regional administration building. Either way, he plans to be well-established in new space in the next year or so.
“I can’t work in a t-hangar forever,” he said.
Voorhees already has one plane available for flight instruction and late last month, was looking for another. His business has the services of a part-time mechanic and two flight instructors.
Currently there are no flight schools in the market that take student aid or VA loan students. Voorhees is working on the certification to do just that, known as a “Part 141,” a more in-depth, FAA-regulated flight-training program. Meanwhile, he is still certified to instruct routine-pay students.
He’s also wanting to become certified in radio avionics, a field that is likely to boom in the next year. The FAA has decreed that by the year 2020 every aircraft, small or large, must have a small black box installed, known as an ADS-B, for automatic dependent surveillance broadcast.
“That’s basically a radar that lets a pilot know where all the other aircraft are in the airspace around them,” he said.
The system is tied into a GPS and must have a display in the cockpit. That’s going to require retrofits to many of the 165,000 general aircraft registered in the United States.
The name Big River is a play on the Mississippi River, which he has crossed many times since moving to this area from Colorado many years ago. Much of that has been done in a Chevrolet Silverado that has 280,000 miles on it. “I’m gonna make it to 500,000 miles, then I’ll get another one,” he said of his truck, quite seriously.
His connections throughout the area have also called him to some charitable work. Voorhees recently returned from a trip to Nicaragua where his mechanic skills were put to use on a Wings of Hope airplane. Based in St. Louis, Wings of Hope specializes in humanitarian medical flights.
He is also a longtime member and a former chapter president of the local Experimental Airplane Association, which gives free flights to children.
Voorhees can be reached at (314) 313-7978 or bigriveraviation@gmail.com.